The Occupy Wall Street phenomenon that has been sweeping the country since it began in New York City Sept. 17 has arrived in Duluth. Since mid-October there has been action in the streets nearly every day. Meetings, marches and rallies have covered the downtown area from Leif Erikson Park to the Civic Center.

Labor played a strong part in the actions asking for accountability from Wall St. for destroying the economy and asking that job creation be on the front burner of Congressional activity. Another strong aspect of the Duluth activity was the continued call to end the wars in Iraq and Afghanistan in order to bring stability to America’s domestic troubles.

But the most visible efforts are from the free-wheeling Occupy Duluth contingent that has over a dozen tents pitched in the Civic Center and taken over the “People’s Power Plaza” on Lake and Superior Street. 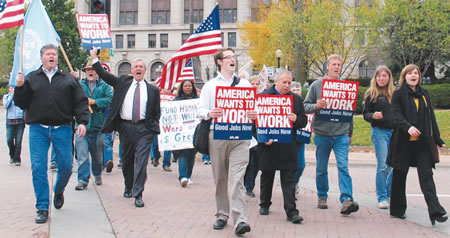 Union members joined Occupy Duluth activists (above) in a march to demand jobs. A small tent city (below) has arisen near the Civic Center. (Photos courtesy of Labor World)

Members of Occupy Duluth made their case at Oct. 13’s Duluth AFL-CIO Central Labor Body meeting. Delegates passed this resolution in support of the effort:

WHEREAS the richest 1% of Americans control approximately 40% of America’s wealth;

WHEREAS the middle class has been steadily decreasing for the last four decades;

WHEREAS Americans throughout the country have been occupying banking industries and government centers since September 17, 2011 and have begun to assemble in Duluth, Minnesota;

Those opposed to the “Occupy” movement call it schizophrenic without demands or goals. Supporters say that’s its beauty. It’s organic, moving and there’s no question why Wall St. was initially targeted since it was the reason America’s economy has all but tanked and taxpayers bailed them out for doing it. The focus of support in America is for the richest 1% and the 99%ers have had enough, occupiers say.

Zach Sias, who was sworn in as an AFSCME Local 66 delegate to the Central Body earlier that night, said he went to the Occupy Minnesota in the Twin Cities Oct. 5 to get a feel for the growing movement.

“It had a lot of benefits to support and everyone was invited to participate and work on common problems rather than work through a government controlled by corporations,” Sias said.

Allan Richardson said the movement changed the narrative seized by the Tea Party in 2010. “A larger Occupy Duluth will create better benefits for all of us and help the labor movement.” He has suggested “Cravaackistan” as the Civic Center name, a reference to 8th District Republican Congressman Chip Cravaack.

Tyler Nord, a UMD student volunteering in the effort and with MoveOn.org, said Occupy Duluth will always be working on the details of their campaign and seeking help.

A lengthy, confusing discussion followed because Occupy Duluth has no structure, or bank account, and Central Body outlays demand accountability. In an almost humorous compromise, the Central Body passed a motion to pay for portable toilets for the effort. One is now at the Civic Center where up to two dozen occupiers are camping out. They are well supplied with food but have many other needs. Stop by and see how to help.

When Occupy Duluth let it be known that they planned on taking over the plaza on Lake Avenue and Superior St., which the city and Minnesota Power share ownership of, Minnesota Power put up No Trespassing signs and barricades and said they would not condone occupiers. They backed off and the signs came down.

Duluth police have been very accommodating, said OD supporters, but they won’t allow the plaza to be occupied from midnight to 6 a.m. so the Civic Center site was created. Lunch is served at 11 a.m. at the Civic Center, dinner at 5 at the plaza. The food working group has invited anyone that is hungry to come and share their food. They are planning to create a weekly menu.

Dishwashing had been a problem but the Exchange Bakery and a supportive citizen are helping in necessary hygiene. Powder and latex free gloves are a need of the food group as are cleaning supplies.

Working groups, general assemblies, and hand language are the structure the occupy movement is using worldwide.

A medical tent without a treatment area is one of the tents at the Civic Center. Their working group put out a call for medical supplies, a standing lamp, and herbal tinctures on Monday night. Medic training will be held next week.

Donations of supplies for the effort can be brought to the Olive Branch house, 1614 Jefferson Street, but no food items are to be dropped off there.

You can keep posted by visiting Occupy Duluth or Occupy Twinports on Facebook, which already has a fake Occupy Duluth site, and other social media. Live streaming is being done.