“We all work through the week, so this is what we do on the weekend,” Monique White explained for news cameras capturing a Sunday, Nov. 13 barbeque event for about 100 Occupy Minnesota protesters and neighborhood friends. “This is the first time opening my house to the community,” usually there’s maybe only 15-20 people at a family event.

According to a spokesperson for the Federal Home Loan Mortgage Corporation (Freddie Mac), the mortgage company whose name is now on the title, it’s been 40 months since White and the original servicer, US Bank, started trying to work out her loan after she lost her full-time job. She now works part-time at a liquor store. Two sons live with her in the three-bedroom home at 33rd Avenue and Sixth Street N, which has been in foreclosure since January 2011.

Brad German of Freddie Mac said White turned down an offer of “cash for keys” in which she would be paid to vacate. The last step is to try to work out a rental agreement so she can stay there while the home is marketed for sale. An investor could buy it and continue renting to her.

The Occupy Minnesota protesters covered the house’s front with slogans and taunts aimed at US Bank. In general, the Occupy movement protests unemployment, economic inequality, and corporate greed. Common slogans, “Banks got bailed out, we got sold out,” and “We are the 99 percent!”

In an email to NorthNews, Nicole Garrison-Sprenger, Vice President of Corporate Public Relations for the local U.S. Bancorp said, “No one from the U.S. Bank public relations team has been in contact with Ms. White. A gentleman claiming to represent her did contact us and threatened a media campaign against the bank if we did not modify the loan. We explained to him that unless he was a family member of Ms. White or legally represented her, we could not work with him, but we would pass along his message to the appropriate people. We also explained that Freddie Mac is the owner of the now foreclosed property, not U.S. Bank, and suggested he contact them. In addition, we have reached out to Freddie Mac to make them aware of the situation.”

When most everyone had been through the food line Nov. 13, speech-making began. Rosemary Williams (pictured, above), who lost her home in a similar situation, said, “They took my home but not my dignity.” She has traveled even to Europe talking about this cause. “There are some FBI among us today but that doesn’t scare us. We stand for people standing up against injustice.”

Activist Mel Reeves said, “People who have worked all their lives should be rewarded with a place to stay and not have to have a lot of money. Figure out how to do housing so we don’t have to do this thing.”

Various protesters point out that many mortgages are for much more than homes are worth in today’s deflated market. They reason that the banks should at least recalculate to take that into account. For example, White’s purchase price in 2003 was $127,000, her taxable value according to city records is $84,500, and a similar house nearby recently sold for $85,000.

“We don’t do principal reductions,” German said, in keeping with the obligation to conserve assets under the bailout. “We can do principal forbearance for up to 40 years under HAMP, but she didn’t qualify for HAMP.” (HAMP is the federal “Making Home Affordable” program.)

Steve Fletcher of Neighborhoods Organizing for Change (NOC) thanked the crowd for bringing new energy to NOC and NCRC (Northside Community Reinvestment Coalition, a group that has been offering advocacy services on loan workouts by door-knocking one-on-one). “Occupy has totally energized what we’re trying to do,” he said.

“We caught [mortgage holders] in a bad lie this week,” he said, talking about a loan in which the “trustee said the servicer is responsible, and the servicer said go talk to the trustee. When they say they can’t fix this, they’re lying.” He vowed to take the cause block by block, house by house.

A co-worker of White’s, an SEIU union member, said he “went through this two years ago. In my 20-year history, my note was sold 17 times. Make sure you know who owns your note.” 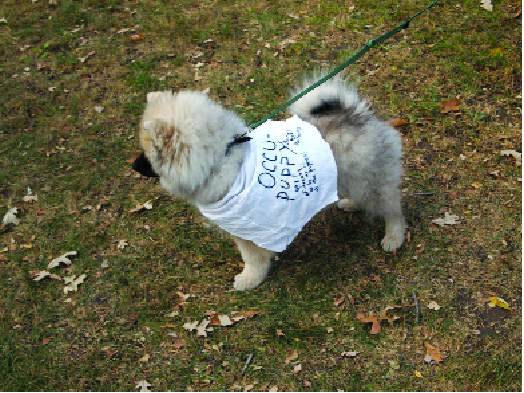