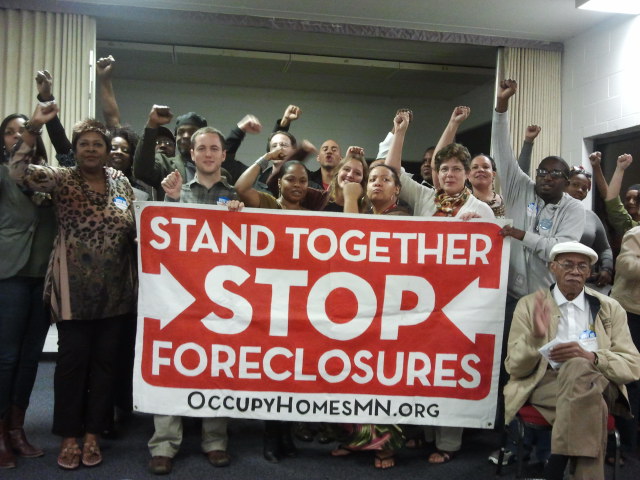 A professional storyteller and longtime community leader, Rose McGee is in danger of losing her Golden Valley home of 18 years.

Speaking to a crowd of about 50 people during a September 24 community anti-foreclosure meeting at Zion Baptist Church in North Minneapolis, McGee said she lost her job last year. And when she told her lender about the unemployment, she said that CitiMortgage promised to review her case and work with her.

To her dismay, she said, she was told two months ago that her house had been sold in May.

Community activists and organizers from Northside Community Reinvestment Coalition, Occupy Homes MN and others banded together to keep McGee in her home.

“We’re looking forward to getting victory for Rose,” Occupy Homes MN organizer Nick Espinosa told the crowd after he shared his mother’s experience of nearly losing her North Minneapolis home in foreclosure to CitiBank.

“CitiBank wanted to auction off our home at a sheriff sale event,” he said, “though our family has the money to pay the mortgage and has been in discussion with the bank to arrange a payment plan.”

But 20 minutes before the house was sold, the Espinosa family got a reprieve. This is because Occupy Homes MN stood up for his mother, Colleen McKeen Espinosa.

The group of volunteers and community activists continue to make massive phone calls and send e-mails to the Citibank Executive Office, urging the bank to negotiate with McGee and other community members who fell victims of foreclosure.

The group plans to continue this action until the bank reverses its plans about McGee’s sheriff’s sale, and issues her a new mortgage.