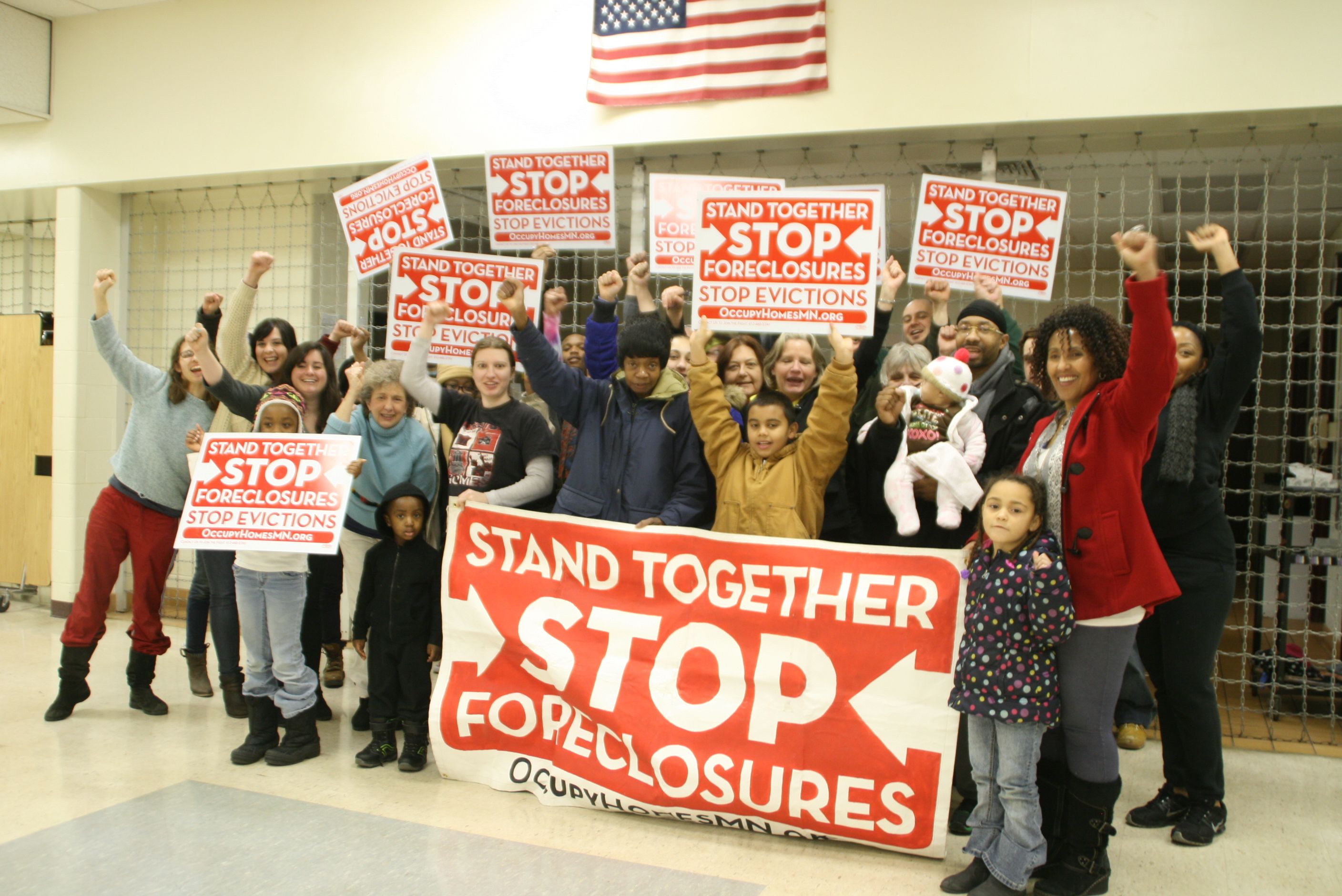 Protesters against foreclosure in Minneapolis's Central and Powderhorn neighborhoods pose for a photo and the Stand Up For Gayle potluck and organizing meeting last Saturday. (Photos by Stephanie Fox)

The cacophony of voices coming from the chilly cafeteria in South Minneapolis’s Green Central Park School last Saturday, were the nearly two dozen people, all on cell phones and all calling Mark Czarnecki, the president of M&T Bank in Buffalo, New York. They were leaving messages, asking him to renegotiate the mortgage of Gayle Lindsey so she can stay in her home.

Lindsay has only until January 29 before she and her family are forced to find another place to live after M&T foreclosed. But, if it’s up to Occupy Homes, MN, she’ll still be there in the spring and, maybe, years longer.

The phone calls were part of a Stand Up For Gayle organizing event and potluck, the first of the Occupy Home MN’s push to make the Minneapolis neighborhoods of Central and Powderhorn, among the worst hit by the foreclosure crisis, foreclosure and eviction free.

“I’m calling from Minneapolis, MN on behalf of Gayle Lindley,” most of the calls began. “She’s been in her house for 11 years…Please, do your best to save Gayle Lindsay’s home…Don’t let it happen like it did in Atlanta, where you flew down and evicted people from their homes…” 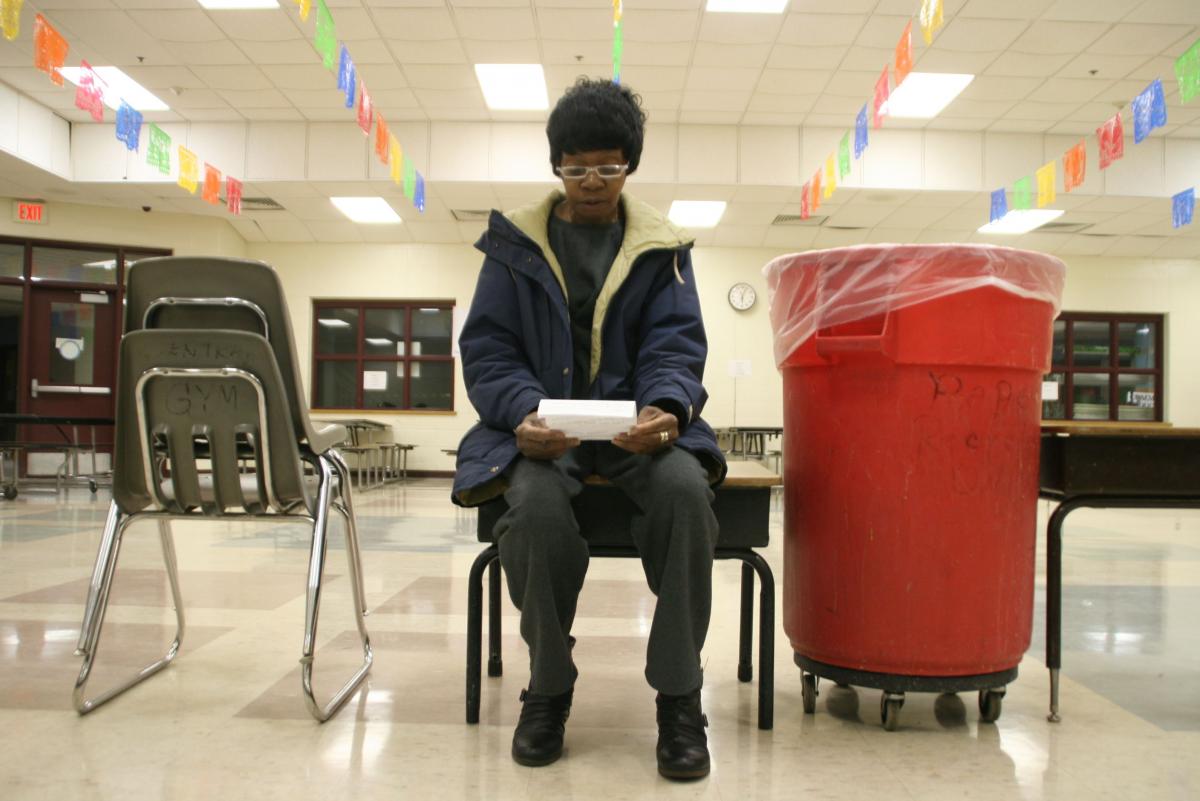 Gayle Lindsey reads a letter of thanks to those who came to help her keep her foreclosed home.

“Most of us have called before,” said Mary Murphy, an Occupy organizer. The idea is, she said, “is to drive Czarnecki crazy so maybe he’ll help her out. “I grew up in the neighborhood and want to be in solidarity with Gayle. No one ever deserves to lose their home. It’s time to stand up and put an end to this.”

Many of those attending knew about foreclosure personally. “We had false hope working with one organizations who were going to help us keep our home,” said David Cruz Nava. “And then, we were told we had 48 hours to leave.”

“They [the bankers] don’t need our homes,” he said. “They can buy our homes 10 times over. But, although we lost our house, we gained a community. Now, we’re going to fight back.”

It is not uncommon for homeowners like Nava, who find themselves in economic difficulty and are in the middle of a loan modification, to be told by the bank “Don’t worry we’re not going to foreclose.” While a bank will let a homeowner believe that a solution is possible, the mortgage has already been turned over to a foreclosure attorney. Sometimes, homeowners are not even aware that their home has been sold at a bank auction.

This process is called dual tracking. Duel tracking is banned in many states, but is legal in Minnesota.

Occupy organizers are hoping to change that. Caravan to the Capitol, a grassroots effort, lobbying on behalf of legislation designed to stop duel tracking and to make sure that tenants in foreclosed properties will be able to stay in their rentals, is in discussion at the state legislature. A bus will be leaving on Wed. at 10:00 a.m., from the Neighbors Organizing for Change office at 911 W. Broadway, and Occupy Homes hopes it will be filled with volunteers.

Occupy the organization is also planning the launch of a major push against foreclosures, beginning February 9, unifying around other homeowners in the two neighborhoods who, like Gayle Lindsey, are at the end of the foreclosures process. Also coming soon, they say; a bigger web presence and a Facebook page.

If you liked this article, you may also want to read:

Gayle Lindsey:  Last ditch fight against foreclosure in South Minneapolis, with a little help from friends 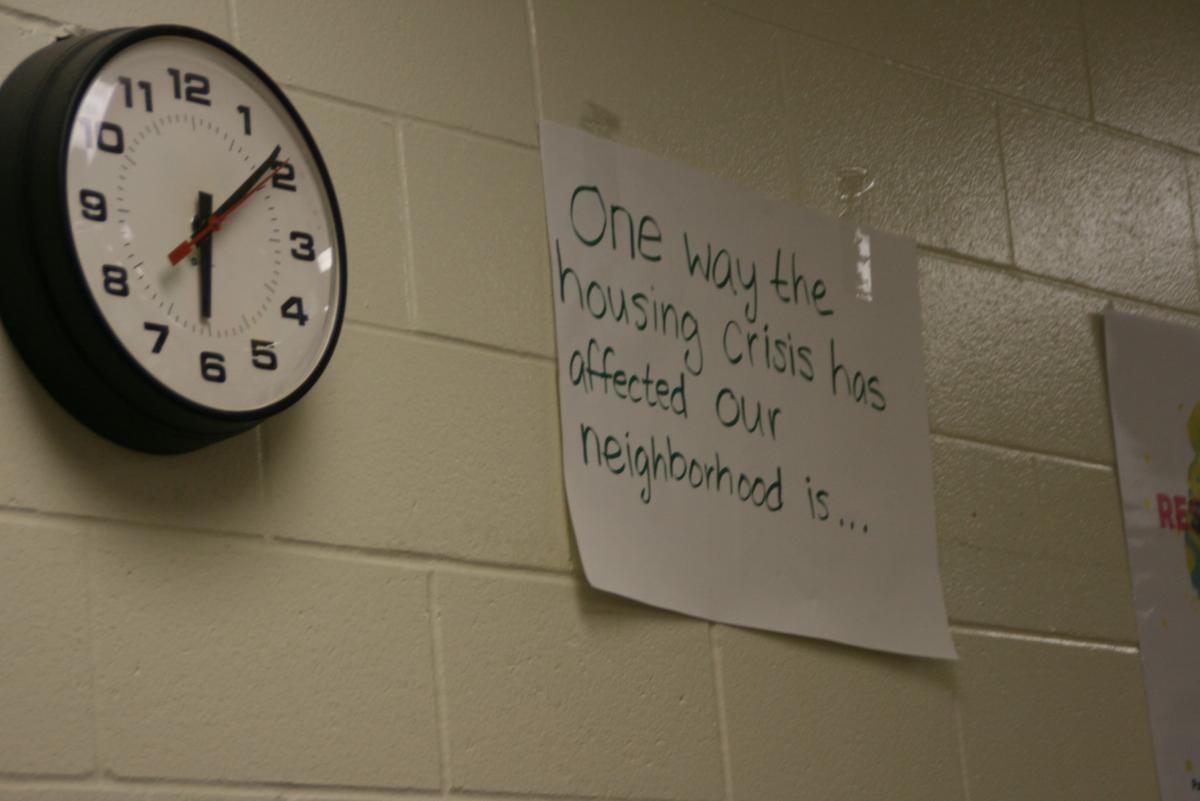