In the last decade, the Filipino American community in Minnesota grew 61 percent – more than doubling its population from 6,200 to 15,600.[i] During that time, Filipino Americans prospered in the state with the lowest unemployment rate among all ethnic groups at 4.1 percent and a higher than average household income of $66,000. While the Filipino American community is perceived to be healthier compared to other immigrant groups due to its relative ease in speaking English and a familiarity with the western culture, community members indicated that there are many in the community, particularly the newly arrived Filipino immigrants, who are struggling. 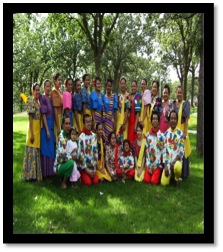 This is the first in a series of articles examining the health and wellbeing of Asian Americans in Minnesota based on the information collected by the Asian Pacific American Community Network (APA ComMNet), a collaboration led by Asian Media Access (AMA), through a grant from the National REACH Coalition (NRC) and the Center for Disease Control (CDC).

In the spring of 2012, APA ComMNet invited prominent Filipino American leaders to discuss the health issues affecting their community. The discussion was recorded as a radio show and broadcasted on Radio ASIA (106.1 HD Radio). Lita Malicsi a member of APA ComMNet and the former president of the Fil-Minnesotan Association (FMA), one of the largest Filipino American community organizations in the state, was the radio show host. During the show, Filipino American guests identified extended work hours as an issue that impacted the health of the community and shared the main reason for why Filipino Americans worked long hours at their jobs. “Even if you are living in the U.S. you are still tied to the Philippines, especially when you have families back home that are living in hardship. We [Filipinos] here in Minnesota, we work hard so we can help them,” said Addi Batica, a Filipino activist who works at the Minnesota Department of Transportation (MNDot).

Filipino community radio show guests also commented that they noticed many Filipino Americans, especially newly arrived immigrants, suffering from loneliness and isolation. “Filipinos get depressed because they want to work hard but they get so tired, and sometimes they work so they want to forget that they are sad here. Long distance was a big issue when I first arrived here. I spent more in long distance calls than what I spent to eat,” said radio guest Darwin Yasis who recently presided over FMA and currently works at MNDoT.

Winnona Palo, a registered nurse, indicated during the radio show that the depressive symptoms experienced by Filipino Americans might exacerbate their current health conditions. “When they think they are just depressed, they don’t have an interest to visit a doctor. Then they won’t realize that they already have high blood pressure, diabetes etc,” Palo said. “That’s why when we don’t treat hypertension, diabetes, cholesterol, then it will lead to stroke, heart attack and even death,” added Dr. Ligaya Carlos, a Filipino American medical doctor who was also a guest during the Filipino community radio show.

High blood pressure, also known as hypertension, diabetes and obesity were found to be prevalent in the Filipino American community. In a two-year health study conducted by APA ComMNet of 94 Filipino Minnesotans, survey results show that over a third had high blood pressure and about one in four were diagnosed with diabetes (see figure 1). 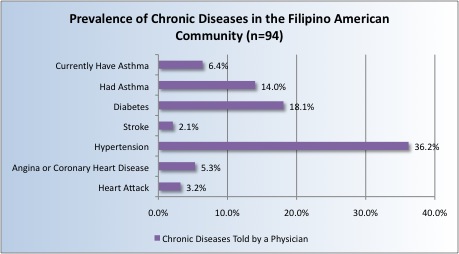 Like the rest of the country, obesity and overweight is increasing in the Filipino American community. Survey results show that about half of Filipino Americans, ages 18 years old and above, were overweight or obese using a body mass index (BMI) measure developed by the Joslin Diabetes Center’s Asian American Diabetes Initiative, a research center affiliated with Harvard University[ii] (see Figure 2). 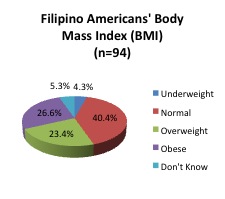 Affordable Prescription Medicine and the Lack of Transportation

While many in the Filipino American community may feel well and visit their doctor at least once a year, radio show guests pointed to certain environmental and social conditions that continue to affect their community’s health and wellbeing. Darwin Yasis said that newly arrived Filipino immigrants often do not access community and public resources due to the lack of public transportation. “In the Philippines, you can use a pedicab, a taxi, a jeepney, you can use different types of public transportation. Unlike here, you have to know the bus schedules,” said Yasis. Registered nurse Winonna Palo agreed. “I didn’t know how to drive and I had young children and couldn’t go to a clinic to visit a doctor,” said Palo. Palo added that most new immigrants must familiarize themselves with American roads and driving customs before taking the test to get a driver’s license. 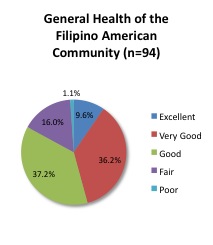 The physical and mental health of elderly Filipino Americans was also a primary concern for radio show guests. The cost of prescription medication, in particular, appeared to be a problem. “Aging Filipinos, those who can get medicine, they will half the tablet so they can extend the use of the medicine even if it’s not suggested by the doctor. That’s why we need to lower the cost of medicine, its important,” said Palo. Radio show host Lita Malicsi recalled a situation in which her friend was prescribed medicine that cost more than $200. Because her friend didn’t know about generic prescription brands that cost lower than regular prescription medicine, Malicsi’s friend did not buy the medicine that she needed.

During the radio show, Filipino Americans stressed the importance of communicating important health information to community members, especially to those who may be isolated or are may be too busy. “It’s the seniors who don’t use the internet, family members who work too much, those who can’t connect with others, they need to know about [low cost] prescription medicine, and other health information,” said Palo. Guests of the show agreed that interpersonal communication and using various media forms to share health information, including the APA ComMNet radio show project, is needed in the Filipino American community. “It’s a cycle of misinformation, if we know about the physical and mental health issues and communicate it to our community, then we can break the cycle,” added Dr. Carlos.