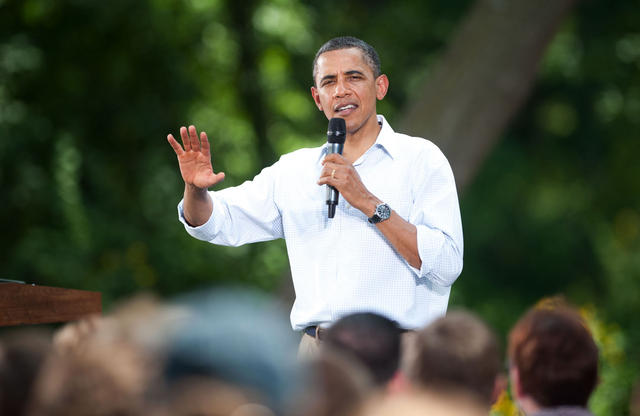 President Obama speaks to crowds on Monday in Cannon Falls, Minn. The event kicked off a three-day bus tour of the Midwest.

In an idyllic park in Cannon Falls, Minn., President Barack Obama kicked off his three-day tour of the Midwest Monday.

More than 500 people gathered next to the Cannon River in the small town about an hour south of the Twin Cities to hear the president speak about the economy and politics on Capitol Hill. The tour, made up of town-hall style gatherings that allow residents to ask the president questions, will also travel to Iowa and Illinois.

It was the president’s second visit to Minnesota in less than a year. Obama held a rally on the University of Minnesota campus Oct. 23, 2010.

“I’m not here just to enjoy the nice weather,” Obama said. “I’m here to enlist you in a fight.”

Obama spoke for more than 20 minutes then answered the questions from nine randomly-selected people for 40 minutes.

He touched on everything from the woes on Wall Street to the recent debt ceiling debate, but focused for a while on issues plaguing rural and farming communities across the nation.

“One of our great strengths as a country is agriculture,” Obama said.

The federal government has given nearly $5 billion in assistance to small- and medium-sized farms, the president said.

Though he did not name any congressmen specifically, he took Republicans to task for what he considers a failure of leadership during the debt ceiling debate that wrapped up Aug. 2.

Obama mentioned several of the programs that were protected under the deal, including healthcare, and programs such as Pell grants — all of which were potential candidates for the chopping block.

Obama also brought up ideas to bolster the economy like renewing payroll tax cuts, which would give the average family $1,000. That extra cash would provide consumers the spending money they need, he said.

Obama asserted that the debt debate was not based in finances, but was a “political crisis.”

“There’s nothing wrong with America that can’t be fixed,” Obama said. “What’s broken is our politics.”

More than 1,300 people lined up to receive a ticket to the event Sunday, some as early as 1 a.m. Katie Hoffman, a Cannon Falls resident, said the buzz around the town of 4,200 was very exciting.

It was the first presidential visit to the town since Calvin Coolidge dedicated a Civil War memorial of a local war hero in 1928.

As attendees filtered into the venue at Lower Hannah’s Bend Park, many expressed a desire to hear clear solutions to issues that had fostered strong debate in Congress and across the nation.

“I’d like him to talk about job creation,” said Rochester resident Julie Streyle, alongside her children, Michael and Morgan.

U.S. Sen. Al Franken said that the president’s tour was necessary to underscore the idea that rural and farming areas are an important part of the economy.

“I think this meant a lot to the people here,” Franken said. “They need to hear him. It’s good they got to hear his message.”

“What we need is to restore public confidence,” Howe said. “This goes a long way toward making people believe in themselves and believe in America.”

The last person to ask a question — a young girl from the crowd — asked Obama, “Why Cannon Falls?”

“I had heard that Cannon Falls had some of the smartest, best-looking kids around,” he answered. “And you have confirmed the rumor about the outstanding children of Cannon Falls.”