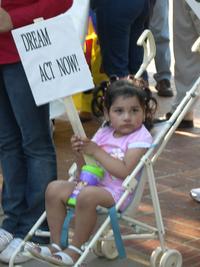 Young people raised in the United States but lacking visas will have a new chance at the American Dream, starting now, according to an announcement made June 15 by President Obama. The Dream Act generation won’t get a path to citizenship — Congress has failed repeatedly to act on that. They will get a temporary safe haven, through an executive order that covers anyone who

• came to the United States under the age of  sixteen;

• is currently in school, has graduated from high school, has obtained a general education development certificate, or is an honorably discharged veteran of  the Coast Guard or Armed Forces of the United States;

• is not above the age of thirty.

The president can’t give them legal status, but he can stop deportations, and that’s what today’s executive order promises. The status they will have is called “deferred action.” To get this status, each qualified young person needs to apply to the USCIS, through procedures yet to be set up. The status is good for two years, and will also allow the immigrant to apply for work permission. According to the New York Times, it could cover about 800,000 young people.

Our Nation’s immigration laws must be enforced in a strong and sensible manner.  They are not designed to be blindly enforced without consideration given to the individual circumstances of each case.  Nor are they designed to remove productive young people to countries where they may not have lived or even speak the language.  Indeed, many of these young people have already contributed to our country in significant ways.

An email from the Immigrant Law Center of Minnesota noted that the executive order will “remove the danger of deportation during a time when many hundreds of thousands of educated, employable individuals are living in limbo, and give them the opportunity to work legally and continue to strengthen their communities.”