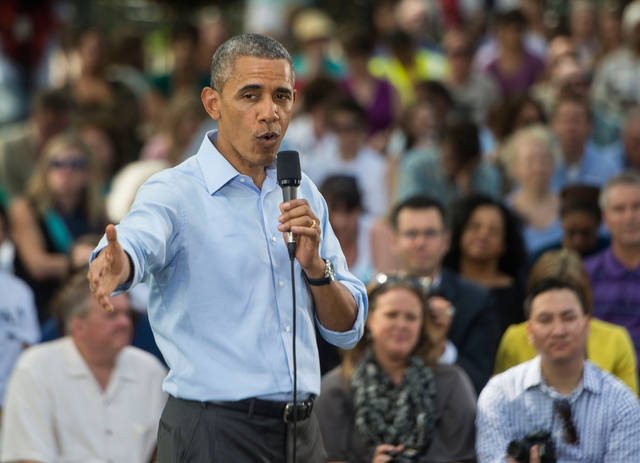 President Barack Obama highlighted minimum wage, the economy, the gender pay gap and student loans during his town hall talk Thursday afternoon at Minnehaha Park, the first of two addresses he’ll give during his seventh trip to Minnesota.

The town hall meeting, Obama said, was part of his efforts to connect with Americans affected by Washington’s economic policies.

“We don’t need a politics that’s playing to some [of] the most fringe elements of politics,” Obama said. “We just need folks who are having a commonsense conversation about what’s happening in your lives and how can we help.”

Minnesota Student Association President Joelle Stangler was in the crowd and asked the president how he plans to garner bipartisan support for the reauthorization of the Higher Education Act.

As part of his higher education policy, Obama said he wants to hold colleges and universities accountable for being more transparent about the cost of earning a degree.

“Hand it to folks at the beginning, break it down for them and that will allow young people, I think to make better decisions,” Obama said. “The federal government can help but states and local government have to do their part as well.”

Stangler said she was pleased with Obama’s response, and that she’s particularly concerned about the cost of college not covered by loans.

“Kids who don’t qualify for grants have to take out a loan and then they have to work it off,” Stangler said. “The more important thing is, is it a worthwhile investment? Start talking about education as an investment.”

Throughout the question-and-answer session, Obama was quick to criticize Republicans — just ahead of a crucial mid-term election season.

“We’ve got a party on the other side whose only rationale, motivations seems to be opposing me … but despite all that, we’re making progress,” he said, citing the Twin Cities’ recently debuted Green Line light rail as an example.

Top Democrats from Minnesota, including Rep. Keith Ellison, St. Paul Mayor Chris Coleman and Gov. Mark Dayton, attended the town hall. On Thursday evening, the president will attend a private at least $10,000 per individual ticket fundraiser for the Democratic Congressional Campaign Committee hosted at the home of private donors.

And on Friday afternoon, Obama is expected to tout Minnesota’s recent legislation that raised minimum wage from $6.15 per hour to $9.50 by 2016 in a public speech at the Lake Harriet Band Shell before leaving Minneapolis.

Check out the Obama in MN Storify here!