On Tuesday morning President Obama spoke along with Miss America and Daniel “Rudy” Ruettiger (inspiration for the movie Rudy) at the 2011 American Legion National Convention at the Minneapolis Convention Center. Obama’s message was that as the troops are brought home, we need to honor and  support them, get them the medical care they need, and get them transitioned into jobs.

Ruettiger was the master of ceremonies for the event, and gave a particularly motivating speech about not giving up on your dreams, having good character, and keeping a good attitude. “Being a part of something is better than being a star,” he said. “You should never give up on your dreams.”

Throughout the morning, there were a number of awards given out to youth and veterans for the American Legion Youth Champions awards and the Spirit of Service Awards. In addition, the Honorable Chet Edwards was given the Distinguished Service Medal. Edwards said that since the event was running behind, he wouldn’t speak his whole speech but would rather utter a few words from his heart. His message was that it was important to honor veterans every day—not just on Veteran’s Day and Memorial Day—and that to do so was an obligation.

This year’s Miss America, Teresa Scanlan, also spoke at the conference. Scanlan, the youngest Miss America in 74 years—and the first Miss Nebraska to win—said of all the pillars that Miss America stands for, service was the most important, and she felt it was particularly important to honor veterans.

Obama also delivered a message about honoring veterans, and that doing so was not about politics, but rather a “moral obligation.”

Obama’s first budget, he said, included the largest increase to the VA budget in the past 30 years, and that so far we are on track to increase funding the VA in the future.

Obama received a standing ovation when he said: “As a nation we are facing some tough choices, but we cannot, we must not balance the budget on the backs of our veterans.”

Obama outlined dramatic improvements to veterans’ health care, including expanding outreach and care to rural veterans, and paying for disability benefits for veterans affected by Agent Orange during Vietnam and infectious diseases from the Gulf War. He stated that it was important to fulfill obligations to the “9/11 Generation” vets. “We’re saving more lives, but more American veterans live with severe wounds for a lifetime,” he said. “That’s why we need to be here for them for a lifetime.” That care includes, he pointed out, care for vets suffering Post Traumatic Stress Disorder by improving outreach and suicide prevention, and sending condolence letters to families who have lost a veteran due to suicide. “These Americans didn’t die because they were weak,” Obama said.

Also, the federal government is working to improve care online, allowing vets to make claims online and sharing medical records. “We’re not there yet,” Obama said. “We’re going to stay on it and keep on it until veterans have a lifetime electronic medical record you can keep for your life.”

The federal government is also making it a priority to break the backlog of disability claims, said Obama. “When our veterans have to fight to get benefits you earned- that’s unacceptable,” he said. “We want your claims to be processed not in months but in days…quickly and accurately, the first time.”

Obama also said the federal government has a mission to end homelessness for vets so that “every veteran that fought for America has a home in America.” 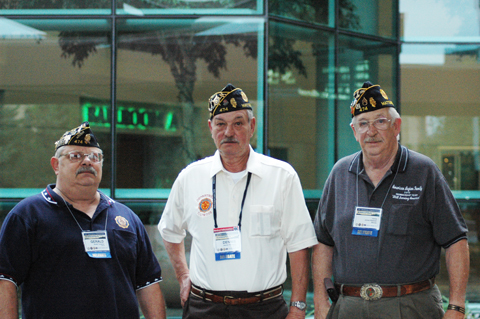 Obama praised the “9/11 Generation” of vets, saying the time had come to honor them as troupes are brought home. The remaining troupes in Iraq will be brought home by the end of this year, he said, and 30,000 troupes will be brought home from Afghanistan by next summer “as our mission transitions from combat to support,” he said. He emphasized that despite 10 years of continuous war, “America’s military is the best it’s ever been.”

However, after a decade of war, Obama said it was time to work on nation-building at home. “Veterans have skills and dedication to lead the way,” he said. He hopes to support veterans coming home by sending 500,000 veterans and their family members to college, and encouraging the federal government to hire more veterans.

In a comprehensive initiative that he’ll outline in the coming weeks, Obama plans to help more veterans find private sector jobs, by translating their military training into the private sector and encouraging the private sector to hire veterans, and offering a “wounded hero” tax credit for hiring veterans with a disability. “When Congress returns,” he said, it “needs to be at the top of the agenda.”

“For sake of vets, for the sake of economy, we need these veterans working,” Obama said. “These are the responsibilities we must fulfill…It’s not just when we’re flush with cash, but always.”