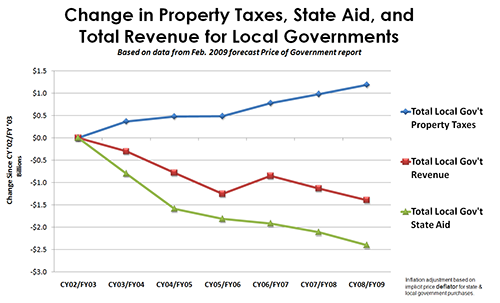 Years ago, Minnesota’s state policymakers realized many public services like plowing local streets, public health services, and law enforcement could be best provided at the local level. As regressive property taxes are the primary way that communities can pay for services, it made sense for the state to share revenue and keep property taxes under control. For years that agreement worked. Minnesotans received top-notch services locally and our property taxes were kept under control. That all changed in 2003 when Minnesota’s public policy lurched in an extremely conservative direction.

Since Minnesota 2020’s launch we have consistently released research showing when Governor Tim Pawlenty and the Legislature have cut money intended for property tax relief, property taxes have gone up. Our report Minnesota Property Taxes by the Numbers: 2009 Edition most recently demonstrated this fact.

Now, an official report from Minnesota’s State Auditor shows that local reliance on property taxes grew a disturbing 102 percent from 1998 to 2008. So what do these numbers mean? First and foremost, property taxes (which aren’t based on income or level of consumption) have already gone up for working Minnesotans and seniors an estimated 25 percent since 2002. At the same time, local leaders have also made cuts, as not to increase property taxes even more so. As a result, the level and frequency of vital services like snowplowing has clearly gone down.

We know the problem, but what’s the solution? Well, to put it bluntly, the state is broke. Governor Pawlenty is even ready to write Minnesota school children another IOU just to avoid asking his wealthy supporters to pay little more in taxes. We can start by taking stock in what Minnesotans need. We need job growth, world-class schools, affordable health care, tax fairness, and reliable public services like police and fire protection just to name a few.

It’s time to decide what kind of outcomes we want and commit to investing in those outcomes. Let’s find areas of the state budget that don’t produce the outcomes we want and make cuts. Let’s increase revenue with progressive taxes like income and sales instead of unfair property taxes. We get what we pay for in Minnesota. Let’s remember that going forward.