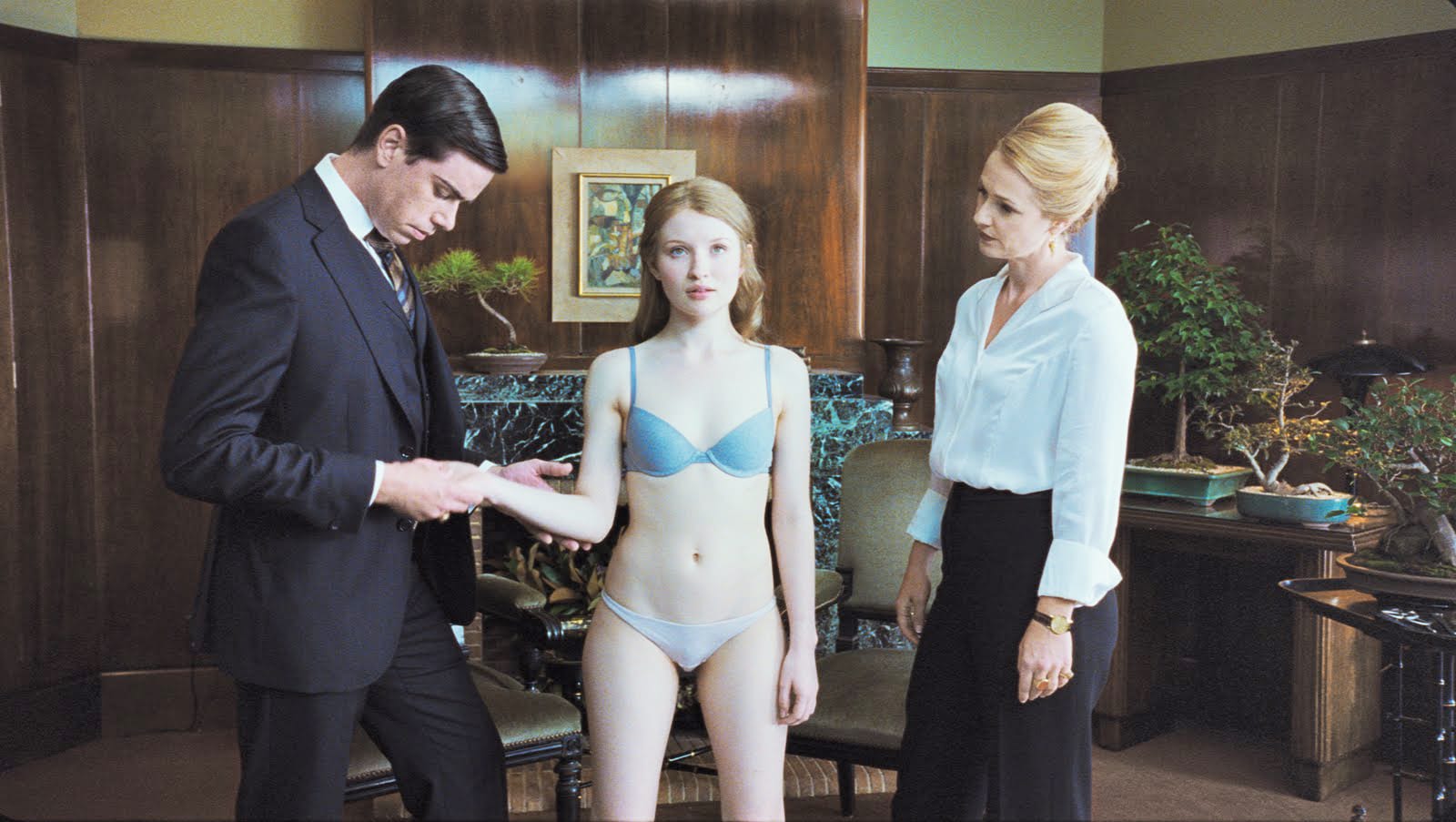 Near the beginning of Julia Leigh’s film Sleeping Beauty—opening January 13 at St. Anthony Main—an employer seeking to hire a young woman named Lucy for work that will involve people taking liberties with Lucy’s naked body assures Lucy that her vagina, at least, will remain sacrosanct. “Your vagina,” says the older woman conducting the interview, “will remain a temple.”

Later in the film, we see Lucy’s naked, drugged body being fondled, lifted, and licked by men who pay for the privilege of doing so. Lucy’s decision to allow this treatment (in exchange for several large bills, at least one of which she deliberately incinerates in an ashtray) is symptomatic of a deep and crippling ennui; the film doesn’t present Lucy’s treatment as acceptable, but it does implicitly suggest that Lucy is right about one thing: her vagina has no divine powers, and though she would certainly be well-advised to find another line of work, putting her clothes on would no more solve her psychological problems than taking them off solves her clients’.

The six women who constitute the cast of Young Jean Lee’s Untitled Feminist Show—which premiered this past weekend at the Walker Art Center—take their clothes off for a very different (and much healthier) reason than Lucy does, but the show has a similarly demystifying effect with regard to the naked body. Whether or not the women in Untitled Feminist Show regard their vaginas as “temples,” in devising this show with Lee, they’ve made the decision to present their unclothed bodies to a paying audience; the show’s ambiguities mean that it falls to each individual audience member to decide what to make of the experience.

When I interviewed Lee for a Vita.mn preview of Untitled Feminist Show, she spoke of the difficulty of making an original, meaningful statement about feminism to a savvy—jaded, even—21st century audience. “I don’t think anyone’s going to see this piece,” said Lee, “and be like, ‘Sexism exists? I had no idea!'”

That’s probably true, but the daring of Lee’s creation was underscored by a comment left by my cousin when I posted a link to my Vita.mn article in a family Facebook group. “Can you please not post this kind of content on the family page?” he asked. “I would like it to be kid friendly (and Christian friendly too).”

Of course the article itself contained no nudity (thanks to some strategically placed black bars), and the show it described was no striptease—but my cousin’s suggestion that any public nudity was by definition un-Christian sent me to the second book of Genesis for research. Sure enough, there’s God kicking Adam and Eve, as Bill Cosby puts it, out of the pool. “Unto Adam and also to his wife did the Lord God make coats of skins, and clothed them. […] Therefor the Lord God sent him forth from the Garden of Eden, to till the ground from whence he was taken.” I suppose one interpretation of this passage is that we blew our chance to romp around naked, and now God has commanded us to keep our coats on until the Second Coming.

I’m aware that I’m a potentially problematic observer of female nudity, because I’m a guy. “The male gaze” is a much-discussed concept in feminist circles, and it’s something Lee told me she wrestled with as she created Untitled Feminist Show. “No matter what I put [the performers] in, there would still be something sexy about it. I even had them in astronaut outfits at one point, and they were still sexy. The only way to get people to stop checking out their bodies was to have them be naked.”

But my sense was that the nudity in Untitled Feminist Show never “disappeared”—in fact, it became what the show was fundamentally about. That impression was confirmed by a talkback following the Friday performance, where no one was very curious about the performance itself; they mostly wanted to know about the nudity. Why naked? What’s it like? How has it affected you?

For the show’s curtain call, the performers took the stage in clothes, and I experienced a strange sense of what I can only call relief: it’s not that I disliked or was offended by the performers’ nakedness, it’s that their nakedness made the experience intense in a way that became a lot to deal with, mentally, over the course of an hour. What was I looking at? Why was I looking? If anything, it started to seem weird to be clothed—like visiting a nudist colony and being the only one who’s not nude.

I appear regularly on a cable access TV show called Freaky Deeky, and every episode concludes with what we call “Naked Time.” We don’t actually get naked, but we get nearly naked—including at our live theatrical appearances, for one of which I stripped down to nothing but a Snuggie. Needless to say, photos of my bare ass subsequently appeared on Facebook. Demonstrating that at least he doesn’t maintain a double standard, my cousin also wrote to me disapproving of my participation in Freaky Deeky.

Being a guy onstage in boxers is very different from being a woman onstage in nothing at all, but the Freaky Deeky shows have a feeling of challenge and liberation that I imagine might be somewhat akin to what the performers in Untitled Feminist Show experience.

As we stand onstage in our underwear, we chant “Get naked! Get naked!” Before our first live-in-person show, we weren’t sure what would happen if we all stripped down and invited the audience to do the same, but what actually happens is basically nothing; except for one or two fellow performance artists who welcome any opportunity to cast off their clothes, everyone in the audience remains clothed, and they just watch us.

At the talkback, Young Jean Lee said that she sometimes cries while watching Untitled Feminist Show, attributing her emotions to the unexpected joy of watching “female bodies just completely owning a space.” Even at the Freaky Deeky shows, you do feel like you kind of own the space: in taking off (most of) your own clothes, you’re breaking a rule that you’re supposed to hide your body, and there’s a thrilling rush of confidence that goes with that action. One of my fellow cast members—a man—has talked about how being on the show has completely transformed the way he thinks about his own body, and has given him much more confidence in putting himself out there in all his burly glory.

Sleeping Beauty and Untitled Feminist Show are very, very different works of art, but they both left me with an awareness of how predictable most shows are in the way they display (or don’t display) bodies, especially women’s bodies. The decision to remove one’s clothes—for an audience of even one, let alone hundreds—is personal and complicated, as is the decision to watch. It’s appropriate that another recent Young Jean Lee show was called Church: if our bodies are our temples, she seems to be suggesting, we ought to be able to write our own liturgies.