The people of Azerbaijan won me over with their weeks-long celebration of the Spring holiday called Novrus. It is my favorite time of year in Minneapolis, but here the anticipation begins long before the Spring Equinox. On the four Tuesdays leading up to March 20th there are festivities honoring the four elements, water, fire, wind, and the earth. Traditional songs, skits and folk dances are performed at community gatherings, and children enjoy nearly 2 weeks off from school. That gives me some time too as a Peace Corps Volunteer teaching English at a secondary school. Novrus is an ancient festival dating back to 500 BC and the Persian Zoroastrians. The word Novrus comes from the Farsi word for “new day,” and it symbolizes Winter’s leaving and Spring’s coming. In the agricultural areas, it is the beginning of field clearing and tree pruning, and symbolizes a renewal of nature, rebirth, and awakening.

Although Novrus was prohibited under soviet rule, it was discreetly celebrated, and today it is the most highly anticipated holiday in Azerbaijan. People retained its many traditions including the lighting of bonfires on the last Tuesday before Novrus. On that evening, bonfires are set throughout each community where young and old, male and female may jump over a bonfire seven times saying, “Give me your redness and take away my yellowness.” It is the symbolic shedding of the past year’s troubles and hardships into the fire. 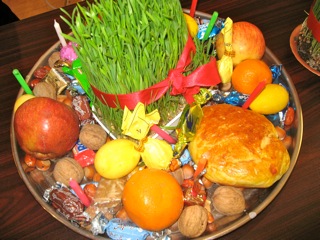 There are many other traditions associated with this holiday season including “hat-throwing.” This is similar to “trick or treat” when children knock on doors and leave their hats for the residents to fill with money or sweets. Fortune-telling is popular during Novrus and unmarried girls particularly attempt to find out who and when they will marry. Like holidays in America, certain foods are associated with Novrus. The most notable is samani, a plate of sprouted wheat wrapped with red ribbon. It is prominent in every home and placed on the table along with a khoncha, a decorated tray with all kinds of treats – walnuts, hazelnuts, chestnuts, almonds, dates, raisins, dried apricots, sweets, candles and colored eggs. Also on the table is a large bowl overflowing with fresh oranges, apples, bananas, grapes, kiwi, and fresh pineapple. Special sweets are prepared for Novrus, so women relatives may gather at someone’s home to make Pakhlava and Shekerbura, traditional pastries filled with ground nuts and sugar.

Some consider Novrus as the first day of a new year, so families may get up early and, if possible, go to a river or spring to wash and splash water on each other. Others leave the lights on all night to ward off misfortune in the coming year. Families enjoy a festive meal in the evening with national dishes such as plov (rice pillaf), dolmas, and baked fish stuffed with levengi – a mixture of ground nuts, onion, and raisins.

On the second day of Novrus, March 21st, many families gather at cemeteries to pray and decorate the graves of their loved ones. It is also a time to make amends with others and begin the Spring season with a clean slate. People greet each other with a phrase similar to happy holidays, “Novrus Bayraminiz Mubarek.”

Peggy (Margaret) Reinhardt is a Minneapolis Wedge resident serving in the Peace Corps in the Central Asian country of Azerbaijan. She maintains a blog at www.inspiredtoretire.blogspot.com