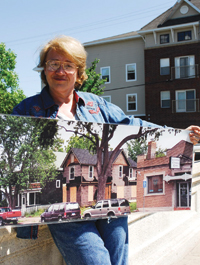 Forget the full-time job; one Minneapolis woman works around the clock doing everything from lobbying the Legislature and serving on the housing board, to fixing faucets and solving domestic disputes, all in the name of love for her neighborhood.

Carol Pass admits she will do just about anything for her East Phillips neighbors. When asked why, she gets a puzzled look on her face.

“I guess I don’t know why. I might say God. I suppose I just really love all the people-or I love most of the people,” Pass laughed.

Pass moved to East Phillips more than 30 years ago. At the time, the neighborhood just off Hiawatha Avenue was gray and falling apart, Pass recalled. Overwhelmed with compassion for those around her, she wanted to make things better.

In 1999, Pass helped to create the East Phillips Improvement Coalition. Since January 2005, she has served as its president. Her latest efforts helped to land a $3.5 million in funding from the state Legislature for a long-awaited and much-needed community center at East Phillips Park. The current park has the usual basketball hoops and playground equipment, but it lacks facilities for community meetings or a place to run programs for kids.

The new facilities will be developed as a part of a crime prevention initiative, providing a safe and fun hangout for the skyrocketing population of youth in East Phillips.

There has been a 43 percent increase in families with children in the greater Phillips neighborhood since the 1990 census, and some 7,000 children live in the south Minneapolis neighborhood, Pass noted. But the neighborhood has only one operating park, a second park is being closed, and there’s a Boys’ and Girls’ club. “We have almost 3,000 kids [in East Phillips] with no program center,” she added. “There’s just a vast number of children with no place to run any programs at all.”

East Phillips Park, located at the intersection of Hiawatha Avenue and 24th Street is also a haven for crime. Drug dealers operate in the park, and people have been murdered there, Pass said.

The source of the problem isn’t the park, however. It’s the open trade in drugs and prostitution along Bloomington Avenue two blocks to the west, Pass said, and that’s not a neighborhood problem, it’s a statewide problem. At least that’s one of the arguments she used to carry the day with state lawmakers. She and other neighborhood activists tracked the license plates of vehicles engaged in verifiable criminal activity on Bloomington Avenue during a three-hour period on three days. Of the 69 cars they could identify, Pass said, more than 40 were registered to owners outside Minneapolis, some from distant communities such as Elk River and Duluth, and even small towns like Bagley, Minn.

Pass was also able to show lawmakers a study by the city of Minneapolis which said that when hours at the park were extended, crime dropped. “This is long overdue. We’ve been suffering as hosts of this family-destroying situation for years,” Pass said.

Minneapolis Park and Recreation Board member Annie Young agrees. “There are masses of children in the neighborhood, but we’re surrounded by freeways,” Young said. “These kids need green space.”

East Phillips is one of four smaller neighborhoods that make up the greater Phillips neighborhood along with Ventura Village, Phillips West and Midtown Phillips.

The greater Phillips neighborhood is home to a diverse and fast-growing population. In contrast to most of the state, whites are the minority, and according to 2000 Census, of the more than 4,000 residents in East Phillips, 11.5 percent are unemployed and 40 percent of families with children under age 18 are living in poverty-a higher percentage than the entire city of Minneapolis combined. The median annual income for residents in East Phillips is $14,215 below the median income for Minneapolis as a whole.

Pass envisions the new community center as a place to host programs for kids and festivals that will inspire people to build more cross-cultural friendships. The design for the new East Phillips Park is still in the planning stage; it may include a new library and skateboard park.

Housing her inspirations
Pass traces her passion for housing back to her childhood spent on the farm. She grew up in a large family in Minnetonka with lots of pets. When she and her siblings first asked their father for horses, she recalled, he insisted they learn everything about them: diet, health and housing. They read stacks of books and even built a barn. They continued to adopt more animals-goats, chickens, dogs-and had to build houses for them all.

“The houses were red with white trim-some even had shutters. The dog house was heated and had windows,” Pass remembered with a grin. “I learned the importance of housing really early.”

When Pass headed to college, her passion to help others grew and she spent time volunteering at nursing homes and going to church. She says she began to see the world divided between the “people who have stuff and people who don’t.” When Pass moved to East Phillips, she said it broke her heart: no trees, no flowers, no nothing.

“Phillips was just asking to be made beautiful,” she remembered.

Pass and her husband, Brad, started small, helping out the neighbors with frozen pipes and keeping the kids busy with yard projects. When their friends began leaving the neighborhood to start families in the suburbs, they and their two sons stayed, and they began buying and fixing up the houses on the block. Today they own 45 units in 14 different buildings in East Phillips and provide housing for about 110 people.

“It’s my way of creating affordable housing for the people of East Phillips. I can move the rents around for people-tenants who can pay more balance out those who can’t,” Pass said. “We’re not in this to make money.”

Because of the crime and poverty, living in East Phillips hasn’t always been easy, however. “Every year we had to re-decide if we were going to stay here,” she said.

Taking charge
Pass began going to community housing meetings soon after they started buying houses and says she just ended up on the East Phillips housing board. She said one of the problems in East Phillips is that there aren’t enough people who can advocate for the area. Most of the residents are renters and many work too much, don’t speak English well or are just intimidated by the process.

“I’m not intimidated by the process because I’m just so pissed off!” Pass said. “It’s a passionate rage.”

That attitude has been a turnoff for some members of her community, and Pass is often the target for scrutiny. “She’s a bulldog,” said Young, a longtime friend. “Carol speaks for the people and sometimes people don’t like that.”

Young says regardless of her approach, Pass is always helping someone or something.

And without Pass’s incredible commitment-spending morning, noon and night lobbying the Legislature-the funding for the new park building project wouldn’t have been successful, she said.

Legislative lobbyist Maryann Campo agrees. Campo said she was impressed by Pass’s knack for lobbying and her devotion to the issue. “Carol was the key!” said Campo about the park project. “She [Pass] puts her money, her mouth and her life all in the same area-East Phillips.”

Pass, a retired college instructor, said she has no plans to slow down her activities on behalf of East Phillips anytime soon.

“Only if somebody runs me out of town!” she laughed.