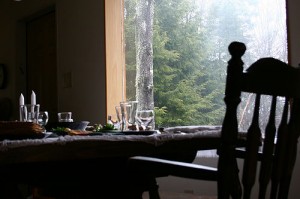 She was my son’s first crush and favorite babysitter. Her name was Katherine and she looked like a teenager, though she was twenty-something when we met.  I think she must have liked horror movies because Josh impressed her by quoting the 1930’s movie, Dracula.

“This kid is my kind of people,” she told me after Josh asked her to come into his parlor in a Bela Lugosi voice. They were at his father’s synagogue.

More than monsters, Katherine liked football, cats and especially the Vikings. When Josh entered junior high and started playing for his school’s football team, Katherine came to watch and unlike his mother, knew all the plays. Something else she knew was how to make a seder shine, pop, and stick in your mind, even days (and weeks) later.

As a child I knew just one kind of seder, sitting around a table with my aunt’s best dishes and tablecloth. Our Haggadahs (Passover story books) were the regulation yellow and red standard issue, and we watched my Uncle Irving read aloud, occasionally allowing those who knew Hebrew to join him. My cousin Johnny and I were bored out of our skulls but neither one was brave enough to raise a distraction; we would have paid dearly and knew it.

As an adult when I moved to the Midwest with Josh’s dad, we hosted seders that mostly emphasized singing, which made sense since Josh’s father was a cantor. When the marriage broke up, I was invited to festivities where others, like me, were experimenting, trying to make a long, ancient ritual come alive. There is a saying that we are all still escaping from Egypt, but for many years, all I could think of when I heard that saying was-I want to escape right now. I changed my mind because of Katherine-and her seder when Josh was ten.

Katherine was Jewish, but had not been raised as a Jew. I think someone in her family might have been, though she can trace her ancestry back to a minor prince who came to England with William the Conqueror-and both parents’ families came over on the Mayflower.

While there is no one event or story that brought her to Judaism, she says she did begin to feel a kind of kinship with the rituals and traditions. So one day she did something about it by formally converting and joining a synagogue. I’m not sure what this has to do with the quality of her seders, but it might be she had traveled a long distance to find these rituals and they too, had been waiting for her; and the energy between them ignited a stronger spark.

I found this energy when I brought my son to Katherine’s apartment on the first night of Passover. It wasn’t any one thing she did, but it may have been the flow of things. A plateful of vegetables passed around throughout the evening so we wouldn’t get hungry; a way of drawing out the boys so they talked in ways I’d never heard them before; a scattering of rubber bugs and frogs and creepy crawly “plagues” all over the table.

She asked Josh and Ari to pretend they were Pharaoh and Moses and give us an idea of what they might have said in the final hours before the Hebrews escaped. Like all good teacher-directors, she made suggestions while they were acting that spurred their imaginations and made their arguments stronger. And when things got too serious, she got us throwing rubber bugs at each other during the recitation of plagues, and smacking each other with bitter herbs.

The adults got to chime in too, of course, but I have always found most seders talk down to children, though they pretend to be engaging them. On this holiday night,  I got to watch my son come out of his ten-year-old shell because Katherine teased the questions out of him,  dancing on the edge of his imagination until he figured out what he wanted to say. More; she made him feel important saying it. Yet what I remember most from that night was the sound of people laughing.

There is something that happens when someone has a chance to light on a ritual one feels deeply connected to, but may not have known as a child; a new way of seeing and apprehending.  Katherine had spent years collecting pieces of Haggadahs she liked and assembling them into her own Passover story. She found the music inside the seder and instinctively made it move, like a fish in a silver river.

If seders really are for children, Katherine won them handily to her side. If they are for the child in all of us who believes in the strong hand and the outstretched arm, and in babies saved from drowning-we could probably do a lot worse than approaching a seder like we were new to it, too.

Watching Josh that evening, I finally understood the saying about all of us escaping from Egypt every time the story is told. Very likely we are all trying to escape from something-maybe  a job we hate or a sarcastic friend or relative-or just the little cruelties we see every day and try to ignore.  And finding the courage to leave can be daunting without the story of someone who did it before you. 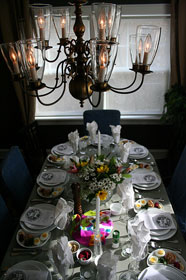 This coming Passover, I’ll be lucky enough to be at Katherine’s table again; funny how things go full circle when you least expect it. Something I didn’t tell you is Katherine got married a few years back to a writer whose imagination and passion are a great match for her.

Seeing them together makes you feel braver somehow, about the possibility of freedom, the probability of love. Seeing them also makes me realize I may still be looking for a little more freedom too, (not least from my own demons) and, yeah, the courage to find it.

Maybe I will this year.