There once was an old husband who was laid off from his job. This husband, in case you haven’t been following avidly his culinary adventures on TC Foodies, was named Bruce. Upon finding himself abruptly unemployed, Bruce took up the daily schedule common to old laid-off guys: staring balefully at the computer, posting testy comments on Facebook﻿, applying gloomily for hundreds of unlikely jobs, hollering at MSNBC. Luckily, he also liked to cook.

As you now know from having taken the aforementioned detour to TC Foodies to read several dozen hilarious blog posts on the subject, hint, hint, Bruce made lots of great meals during those restive days of unemployment comp. He read recipes and cookbooks. He grocery-shopped like an Italian housewife, buying bread here, cheese there, wine yet elsewhere. He was frugal and creative. Coming home from work every day, I could smell the fabulous dinner-to-be before I even opened the door.

And then, after a mere two years of incessant job-hunting, he got a part-time temp job. This led to a number of conflicting responses, such as, “Yay! A job!” and “Calm down, it’s a temp job,” and “Whoa, less time to cook,” and “Are we having that again?” He needed to think of a reliable, easy dinner that reflected both the celebratory aspect of finding work and the economic downturn-induced certainty that it won’t last long. Thus, Bruce was inspired to return to the favorite dinner of his youth, which was a long, long time ago.

Bruce grew up in a blue-collar family whose motto was, “We may not have much money, but at least we’re gonna eat well.” As you may or may not recall, “eating well” in the 1950s was not what it is today. Today it implies expensive organic produce, pointlessly shrink-wrapped what-all from Trader Joe’s, freshly baked whole grain bread, French cheeses, free-range carcasses of various sorts, and a litany of tiresome obligations decreed by nutritionists. Back in the day, it meant one thing: steak. 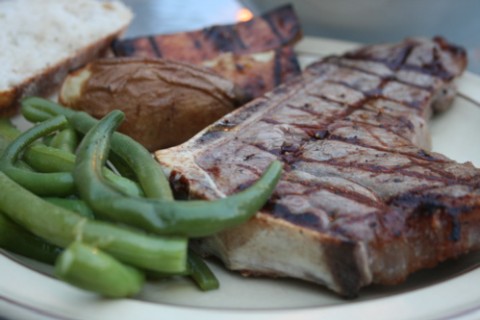 People who grew up in the Depression, as did Bruce’s parents, seemed to come out of it with one of a couple disparate attitudes toward buying food. Some cautiously spent as little as possible; others threw caution to the winds and lived paycheck to paycheck, spending whatever they could on steak and whiskey, the days of horsemeat and bathtub gin being at least temporarily over. Bruce’s parents were of the latter mindset.

The good thing about a steak dinner, besides its festive, self-congratulatory implication, is that it doesn’t take long to make. You have to have potatoes with steak, don’t ask me why, and potatoes don’t take that long to cook, either. If this were the actual olden days, there would also be a salad made of iceberg lettuce. Iceberg lettuce is enjoying a trendy resurgence for the trendiest eaters, but I can’t say I’m sorry that Bruce generally makes a salad from something a little fluffier. There you have it, a nice dinner.

Of course, there are many reasons not to eat red meat. The earth. Health. Mercy. Jeremy Rifkin. Eating it regularly would not be my first choice, but I’m not complaining. Does it sound like I’m complaining? Hey, I’m rockin’ a 170 mg/dL, what do I care? It’s not like steak is the only thing we eat. We also have spaghetti. Anyway, I have no right to kvetch, because I have a hard time with menu planning myself. When Bruce says, “Any ideas for dinner?”, the deepest wellsprings of creativity I can tap always spew forth the same answer: “No.”

So, here is Bruce’s recipe for steak.

1. Either buy it from a local farm where the farmers are nice to their cows, and then mention frequently that you did so, or buy it from an evil factory farm and throw away the label before anyone sees it.

2. Rub some olive oil and black pepper into the top of each steak.

3. Put the steaks on a really hot grill. When they “feel” ready to turn over, turn them over. (NB: “Could you describe the feel?” “Oh, you know.” Very helpful.)

5. Take them off and let them rest a few minutes and put some coarse salt on them.

If you really want to feel post-Depression-era, wash your steak down with a quart of Old Fitzgerald. (Not recommended, judging from the rest of the life story of Bruce’s parents.) Otherwise, drink some heart-healthy red wine, thereby either compensating for or forgetting about the multitude of sins you’re committing by eating this nostalgic, celebratory, extravagant dinner. 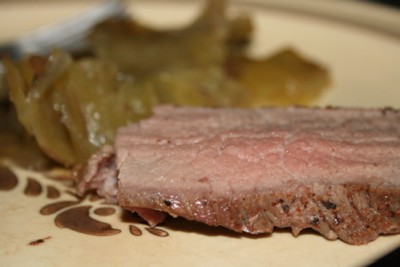