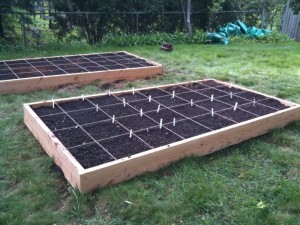 Last week was monumental in our house (er, yard): my raised garden beds got dug, built, filled, and (as of the writing of this post) one of the two of them got seeded. It’s glorious – the culmination of at least five months of planning, plotting, prepping, thinking, and researching.

A few years ago when my brother and sister-in-law bought a hobby farm in southern Wisconsin, I thought they were daffy. Farming isn’t something people actively seek out, it’s something you’re born into doing, right? (And then probably leave?)

Well it turns out they were way ahead of me on this one. They’ve been, year by year and little by little, expanding their scope. They started with a small garden patch just a little bigger than my raised beds, a slew of chickens and ducks, and a couple of farm dogs; now they have at least half an acre of vegetable gardens, more chickens and ducks (and even turkeys sometimes), and a few sheep, mothering goats, pigs, cows, some mouse-catching cats, and animal herding dogs. They are supplying themselves with a significant portion of their own food, and they know where it came from and how it was grown or produced. Why does it matter what my brother’s family is doing in southern Wisconsin? Because it means that I have a direct source for information on how to get all of this “urban farming” stuff going, because they’ve been at it a few years.

And as someone interested in delicious food and sustainability, it felt like I was missing a piece of the puzzle by simply buying local and/or organic food (which I don’t even do as often as I’d like). Minnesota might be cold too many months out of the year to grow stuff like pineapples, but we can grow all sorts of yummies.

And, as my father-in-law keeps reminding me, nothing tastes as good as food straight out of the garden. So crisp, so fresh, and so full of flavor. I want in on that! I say yes to carrots and zucchini, raspberries and snap peas, and everything else. My brother and sister-in-law are also my inspiration – if they can do it, having grown up as city kids, so can I.

And so can you. My two raised beds are 4′ x 8′ each – the (rough) prescribed amount so you can reach all parts of the bed from one or two spots – reducing movement means easier and more efficient maintenance; from either of the long sides you can reach halfway into the bed and about two feet in either direction (for a span of four feet). The books recommend this layout because it takes less space without traditional farm rows (which are meant for tractors), and raising the beds gives your plants more vertical room to grow, which usually equates to higher yields (due to deeper root growth area) and less horizontal room needed – another reason you can plant more items in a smaller space.

I ordered the extra dirt required for filling in the beds, as well as manure and peat moss, from Gerten’s Greenhouse in Inver Grove Heights. For $60 (in addition to the cost of the materials) they delivered it to my driveway the next day. In hindsight, this was a super-smart move on my part. I cannot imagine getting all that soil (three cubic yards) into – and then OUT of – my mom’s Explorer, in addition to then moving it into the beds in the backyard.

Tip: If you’re thinking about starting your own garden, avoid the inclination to be (totally) overwhelmed.

In fact, every book and resource I’ve read say to take it easy your first year. If you lose interest because it gets too hard and intimidating, your garden will fail, most likely, if you even get started at all. In fact, two raised beds is probably too much garden for a first year, but I’ve been reminding myself that it’s ready for the future, and it’ll just have to be OK if it’s not perfectly tended this year, since I’m biting off more than the recommended amount.

Tip: Start small, and plant things you know that you and your household will eat. What am I growing?


Whew! Many of them have been seeded since mid-March, living a (mostly) climate-controlled life under lamps while they await their new home in fresh soil with warm sunlight.The hot-weather veggies and herbs (tomatoes, basil, etc.) will get their own planters at the front of the house where we get more direct sunlight.

My other tip? Share a garden with a friend (or three!).

It’s a great excuse to spend time together, seeding and transplanting, and later weeding and harvesting. You also then have someone to care for the garden if one of you is on vacation, as well as others to share the bounty with (God willing!).

Got some great urban farming/victory garden tips for others in the Twin Cities? Questions for me about my gardens? Ask away! Over the next few months I’ll try to fill you in on how my garden is going.