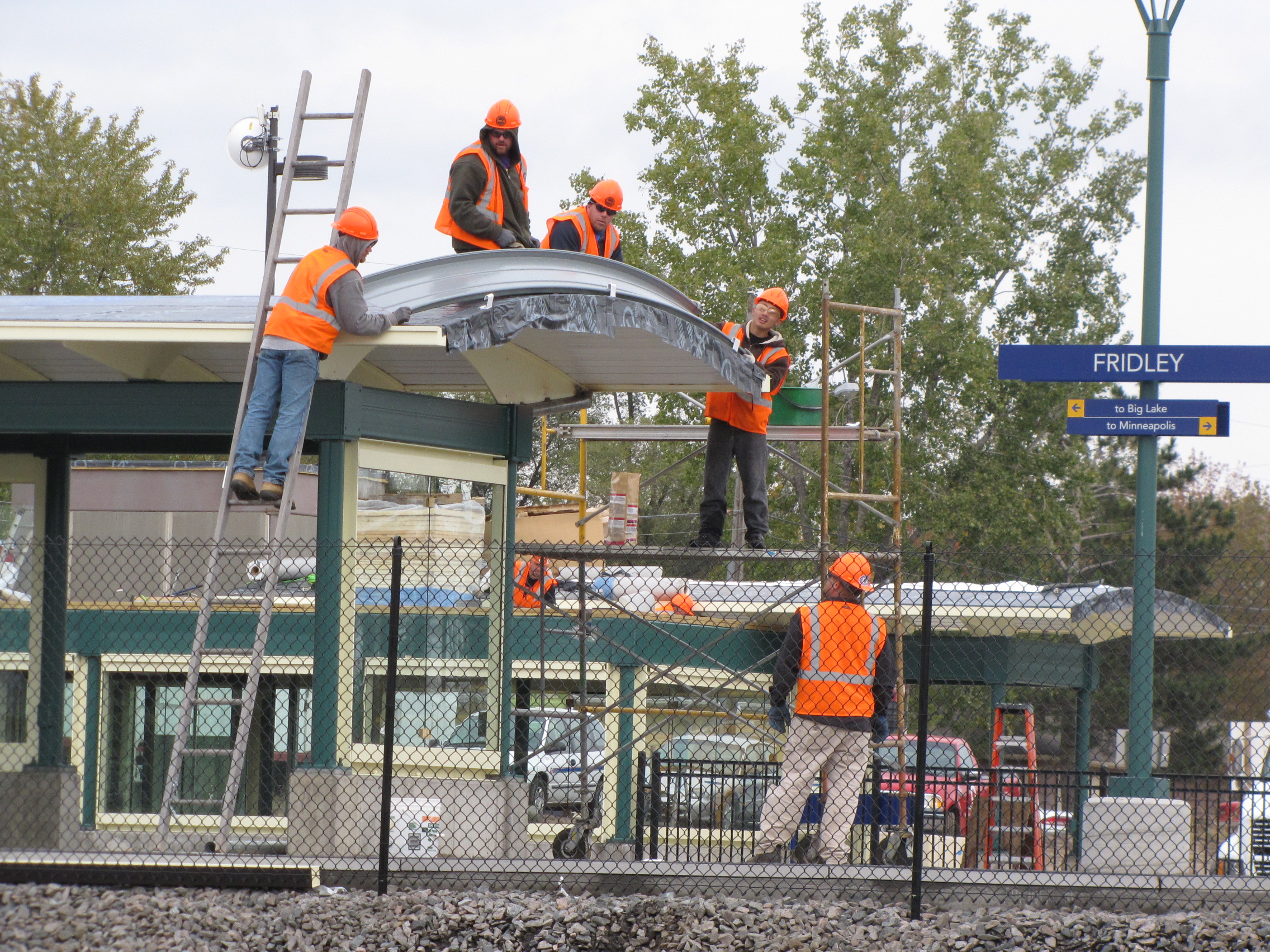 At Northstar’s Fridley station October 13, workers worked on the roof of a shelter. (Photo by Steve Share)

The hottest ticket in town Saturday, November 14 will be a train ticket. That’s the day the $320 million Northstar Commuter Rail Line makes its public debut, offering free rides along the new 40-mile line that runs from Big Lake to downtown Minneapolis. Celebrations will be planned November 14 at each of the six stops along the route.

“Together, in November, we will be riding public transit which is safe, quick and comfortable,” said Anoka County Commissioner Dan Erhart, who helped lead the effort to build Northstar as chair of the Northstar Corridor Development Authority.

What now will be a 51-minute trip from Big Lake to downtown Minneapolis was 13 years in the making.

“This was a process in which a team of 30 communities, organized labor, chambers of commerce and other groups stayed together, kept looking at the goal, and achieved success,” Erhart said.

Supporters didn’t give up, even when on-again, off-again support from Governor Tim Pawlenty in recent years led to uncertainty about the project’s future.

The final federal funding to launch Northstar came through in December 2007, adding to local and state funding commitments.

Erhart said all the work to construct the six stations was performed by union contractors or contractors paying prevailing wage.

The work of running the system will be performed by members of three unions: Amalgamated Transit Union Local 1005, the United Transportation Union, and the Brotherhood of Locomotive Engineers.

“Everybody can’t wait for that first trip to go down the line,” said Michelle Sommers, president of ATU Local 1005. She said 25 ATU members will work to maintain Northstar trains, buildings, stations, train platforms, and ticket machines.

Because Northstar will share the same track as freight trains operated by the Burlington Northern Santa Fe railroad, BNSF crews will operate the trains. “They’re off the freight roster of the BNSF,” said Phillip Qualy, state legislative director for UTU. “They’ve been training the crews since July.”

Qualy said Northstar’s nine conductors will be UTU members, while the nine engineers will be a combination of members from UTU and BLE.