In a basement room lined with college banners, inside the Five Points Building, staffers, parents and partners celebrated Northside Achievement Zone’s (NAZ) milestone of having 1,300 students enrolled and on track to be college ready.

NAZ, through its Promise Neighborhood is seeking to build a culture of achievement in a geographic zone between 35th Avenue to the north, Penn Avenue to the west, West Broadway to the south and Interstate 94 to the east. Naz’s goal for its Promise Neighborhood is to graduate children college ready and end a cycle of poverty within the north Minneapolis area. And though it was a celebratory atmosphere, Geoffrey Canada, founder of the famed Harlem Children’s Zone, Inc., told staffers the celebration should be short-lived as there is plenty more work to be done.

“We except no excuses for failure,” said Canada, speaking to a room of about 50 staffers, parents and NAZ partners. “Our kids have been failed for too long. People have to do more. You have to double your efforts of what got you to this point. If you keep doing the same, you’ll be in this same place next year. This is the beginning of a process that takes time, but in a community that doesn’t have time to wait.”

Staffers were told to briefly celebrate their accomplishments, but to stride forward, bit-by-bit.

“There was a time when I was losing more than we were saving (with the Harlem Children’s Zone), but that’s not the case anymore. We’re not losing 70 percent, now we’re losing 7 percent. People have got to do more. Accountability is key.”

The renowned educator said when he started he had 50 children in college, but today his program has 960 students currently enrolled in college in what he and others have dubbed the “cradle to college pipeline.”

Canada, who has visited with staff at NAZ three times within the past 15 months, said the work is challenging, but if it were not a challenge, there would be no need for the work.

“This work is not for everyone. Most don’t want to find the problems, much less solve them,” said Canada, who has been featured on 60 Minutes, the Oprah Winfrey Show, CNN, MSNBC and had been honored by U.S. News and World Report as one of ‘America’s Best Leaders.’ “Don’t come to me saying we can’t help that kid, ‘that kid is bad.’ Yes, I know he’s bad, that’s why we’re here. Yes, I know there are gangs here. That’s why we’re here. You’re going to tell me we’re going to have a bunch of 15-year-olds telling us what’s going to happen in our community? I don’t think so. At some point we got scared of these kids. We’re going to make sure these kids know the adults are in control.”

Canada hailed NAZ’s Promise Neighborhood as an example of measurable success. And though the NAZ model varies from Canada’s Harlem model, it shows the core tenets of the Harlem model can be emulated nationally.

“I tell people around the country they should pay attention to NAZ, they are going to get things right,” said Canada, who praised the organization’s leadership. “There’s a great leader here. It takes a strong leader to make Promise Neighborhood a success. It’s not just enough to love children. There are a lot of people who love children and they still fail the children. 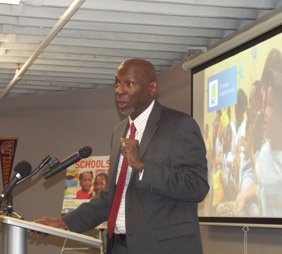 NAZ is headed by president and CEO Sondra Samuels.

Kenneth Scales, who is a NAZ family connecter, said though the task is daunting, he is seeing first-hand the results of Promise Neighborhood.

“You can see the change in culture to a culture of achievement,” said Scales, who cited housing as a major hurdle to success. “But it’s rough because how do you encourage a child to succeed in school when a family is facing homelessness?”

Through its 28 partners, nine participating schools and two institutions of higher learning, NAZ is seeking a holistic approach to college readiness, including addressing issues of housing, employment and mental health.

“In city after city, after city, in the African-American community, jobs are becoming scarce – in particular for men, schools are not living up to their mission and churches are becoming more insular, and what you have is a toxic stew,” said Canada.