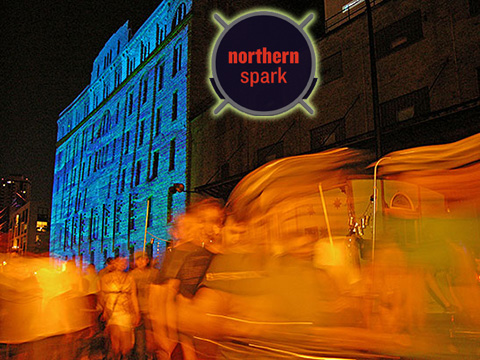 Last year at the first Northern Spark I was impressed with the event(s) and I had hoped to take in more this year. Last year was spread out in both Minneapolis and St. Paul. This year no St. Paul sites were included, but there is every indication that St. Paul will join Minneapolis again in 2013 in celebrating a Dusk to Dawn extravaganza. I did succeed in more stops and many more photo images, but I am still left with a feeling of having missed so very much. I also had taken in some of the Famous Dave’s BBQ & Blues Festival. I haven’t ever reached the point of having too much fun, but it was close during the evening of June 9, 2012 Northern Spark. Photographs are limited in depicting the experience, but perhaps the images I present here and others you see, that people were continually taking, will help persuade you to support and venture out in another Northern Spark night in 2013. As I biked to the Stone Arch Bridge from a Blues Festival, I came across a Jazz set. That is one of the delights of Northern Spark, a spontaneous discovery of wondrous things. As Dr. Seuss (Theodor Geisel) would suggest; “think and wonder, wonder and think”, and artist Robin Schwartzman proclaimed it with large illuminated letters on the Stone Arch Bridge. Look for better images of that project around the web. I am sure it was captured in all its glory by someone. On the Bridge itself appeared a puppet play. Open Eye Figure Theater, The Two Wheel Tour: A Parade of Oddities held a mobil puppet theater. A team effort, with much audience participation, The Owls Are Not What They Seem. An instalation in the Fahter Hennepin Park pavilion, projected audience’s images along with other designs onto screens. Along Main Street were many projects and participants. Asia Ward’s Body Pong seemed to be a crowd pleaser, as individuals would have their silhouette used as the paddle for a game of Pong.

Blend computer technologies, traditional media and bikes, and you may create a Northern Spark. Main Street along the Mississippi river front, and my next stop was at the Walker art Center. And the last stop for this old guy was at Intermedia Arts; where I also picked up a cold beer. I hope to repeat this excursion next year, with more beer.