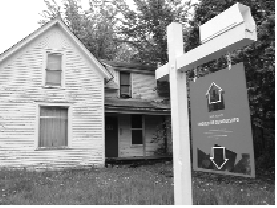 “Department of Change” he called it. When a house near Witt Siasoco’s Holland Neighborhood home was condemned, he instinctively used his artistic, graphic and engagement skills to demonstrate what he was learning.

With condemned status, “we thought it was going to be torn down. But I dug deeper.” It takes more to get it done. He faked a realty sign (at right) that announced “this house should be demolished” and set out brochures as to why. “But I also gave the other side. If we want to preserve, how to, and lists of resources.”

Now, as one of several artists selected to work with city planners on Creative CityMaking projects he’s working on the flip side. “It’s in many ways a perfect match. I met these planners as a citizen on the opposite side. It’s so bizarre, but I think it was meant to happen.”

Siasoco said all the artists involved are deeply rooted as community artists, “that’s a big reason they were selected. I know a lot of people with artistic merit” who weren’t chosen.

Siasoco’s project involves working with Minneapolis city planner Joe Bernard and a consultant who’s finishing up a 10-year process of surveying over 300 properties and areas of the city that could be considered historic at some level. Northeasters may remember sessions held for the Old St. Anthony area or Shoreham Yards.

“The first draft of their report will be ready in March or April. Then we move on how to approach it. In May and June there will be way more ways to engage. We’re brainstorming ways to highlight what these sites mean to community. Hopefully it will be something people can continue to interact with. Perhaps an Arts Board history curriculum. Some kind of structure but usable in whatever environment you want.”

While the methodology will evolve from the situation, Siasoco’s background includes working with teens for 10 years at the Walker Art Center in “unique engagements. We’ve been called all over the world” to show how it’s done.

A couple years ago, he left the Walker and went back to Minneapolis College of Art and Design (MCAD) to learn graphic design. “I’m an atypical graphic designer and artist. I blend both.” He’s done a lot of design projects for non-profit organizations.

He’s working now at Hancock Recreation Center in St. Paul on the Canvas Youth Leadership Council, where they bring in artists for events and hands-on six-week or two-month workshops. They recently did a mosaic project.

“I still make art. It’s a mix of design and art. When I left the Walker I really wanted to make stuff that was pragmatic.” He’s in a group of artists who meet weekly to “make stuff” and encourage each other.

At one time he was at a frantic pace with many different projects going, so made a video about slowing down. He asked people to stand still for 10 seconds “so I could just take it in.”

He’s fascinated also with this batch of people who’ve come together for Creative CityMaking. “These city planners live and breathe sewers, and water quality, or how long you wait at a traffic light. I relate to Joe (Bernard) on that level. He described another planner, Northeast resident since 2004 Jim Voll, as “the consummate city planner. He’s hard to read.” Probably a good thing, Siasoco said, because planners aren’t supposed to show their own opinions.

“I believe in cities, I like them. I like the work of making them run better,” Voll said. Fourteen of his 17 years in planning have been in Minneapolis, mostly in the development services department doing plan reviews, some with long range community planners. About the time of the North Minneapolis May 2011 tornado, he was assigned to North as one of the long range community planners —they’re the part of the Community Planning and Economic Development Department selected to carry out the Creative CityMaking grant. He’ll be working with Hennepin County planners and artists Wing Young Huie and Ashley Hanson on the Penn Avenue North Small Area Plan.

Voll lives in Waite Park neighborhood, used to live in Holland, and has lived in southwest Minneapolis but also Eau Claire and Madison, Wisconsin.

He’s served on the city’s Public Art Advisory Panel for about a year, “which has been fun,” and said working with artists “will be a great opportunity. Anytime you can do something that helps improve, to do things differently or better, it’s good to be exposed to.”

There have been two two-day retreats, out of a total of five planned, where the whole group, plus planning chief Jack Byers and public art administrator Mary Altman trade information about their fields, each other’s vocabulary. There’s talk of compiling reading lists, and each team has done different things to get acquainted and start sizing up their projects.

The Creative CityMaking grant, $325,000 from ArtPlace America,  went to Intermedia Arts to augment and enhance the City’s funding for the projects involved. “It does not replace City funding, and the use of the ArtPlace funds does not take away from the City’s tax base or funding sources,” a City news release states. There’s a total of five teams, and one  of the teams will work on two separate projects, one in Dinkytown, the other in Linden Hills.

Voll, Huie and Hanson have toured the area they’ll be working on later this year, but there’s no meeting schedule yet. “I don’t want to predetermine anything. There’s still some value to meetings. The artists involvement will hopefully augment that and help us glean information and opinions from people who wouldn’t use a meeting format.”

Voll said in his job “you get to meet interesting people. I’m always impressed by how committed people are, to take the time.” Even negative comments help to make a better product. “There are some really great ideas, we can focus on that. It makes it easier to get something done when you have public support. We certainly wouldn’t like a meeting where no one shows up.”

City planners, Siasoco said, “are like monks. They have to go every evening to meetings and deal with angry people, and smile. They don’t take it personally.” Siasoco said many of the planners have indicated they got into the field because they want to address inequality, to give people a voice. “They’ve seen what can happen when people are not involved in the process.”