This holiday season, as in most, Northeast is the center of the universe for some popular products.

Mrs. Kelly’s tea, blessed by mention as a top shopping destination by a local television station, entertained a steady stream of tasters leaving off bags of donated food in exchange for “scant teaspoons” of sample teas to each be steeped in three-ounces of hot water.

Cheesecake, chocolates, and chair massages also beckoned samplers as they took a load off their feet in the still-stark warehouse lounge, chatting while savoring the scents of tea developing in the Styrofoam cups.

“I figured out I like four different kinds,” said one shopper. “And I have plenty of tins at home so it doesn’t bother me to buy in bulk and refill.” The business (photo below), located at 77 13th Ave. NE, to keep costs down and conserve earth resources, now sells the tins separately. 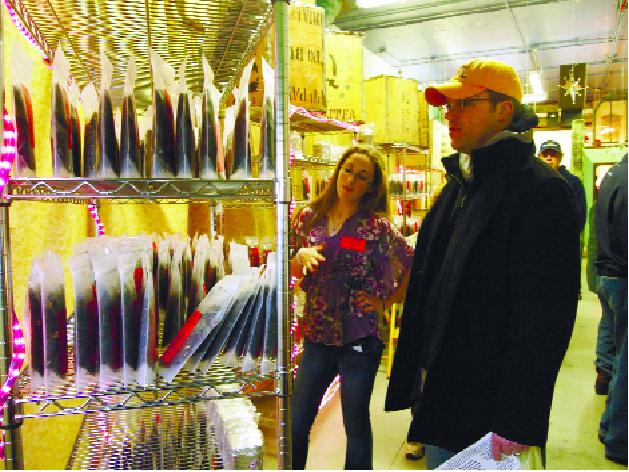 Mindy Kelly, CEO “bursting with pride to be a winner in the Flavored Black category at the World Tea Championship,” manned the till at the tea tasting Dec. 3. Her website, www.mrskellystea.com continues, “In a blind taste test held in Las Vegas on Feb 22 and 23rd, 2011, Mrs. Kelly’s Celebration/Holiday Tea received a score of 85, which denotes a tea with superior qualities and characteristics. There were over 200 entrants in this category, and Mrs. Kelly’s received the coveted second place award (losing first place by only 1 point!)”

The warehouse will be open for walk-in sales Dec. 17 between 10 a.m. and 1 p.m. for last-minute shopping, otherwise, the business is available on line.

During First Thursday, Dec. 1, Wintercraft took over Hedberg Maps’ conference table to show how ice globes and globe ice lanterns are made. Jennifer Shea Hedberg started the business, and husband Tom Hedberg has been wrangling ice with and for her for 20 years. While they sell kits and accessories through retailers in 18 states plus Minnesota, their website www.wintercraft.com boasts the address of the Northrup King Building, 1500 Jackson St. NE, Minneapolis.

Ice globes start with heavy duty balloons (the quality is similar to punching balloons from a toy store) filled with water, set in a freezer or outside to partially freeze. If they’re set on the ground or on an insulating disk of Styrofoam, the bottom is the last to freeze. Tom Hedberg showed how a depression in the bottom indicates it’s still liquid (photos at top and below). 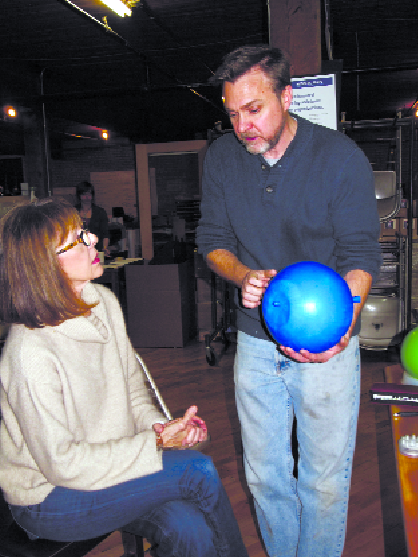 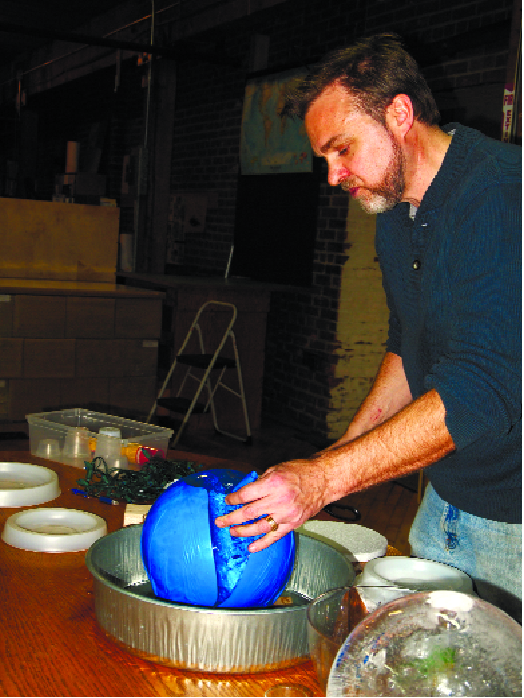 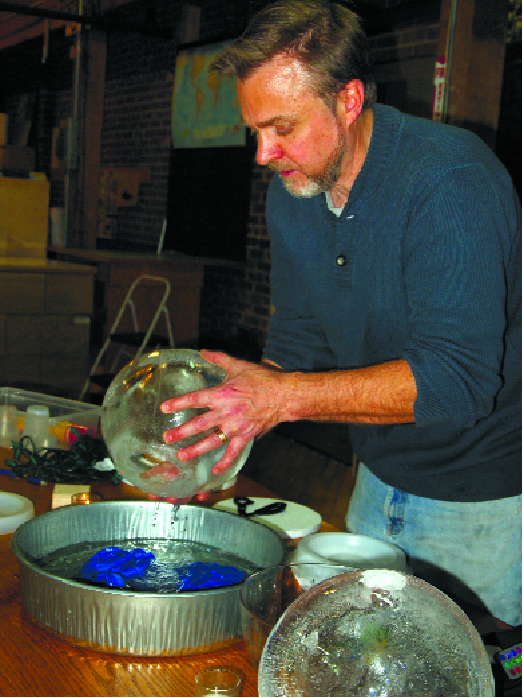 As shown in the three small photos, after several hours, take the globe in and cut the balloon away, releasing the water from the bottom by breaking through any ice that may have started forming there. Like an upside down fishbowl, it can be inverted over a candle or a special waterproof LED light. If using a candle, set the globe on blocks or dig a channel in the snow so that some air can get in. “A candle will eventually melt itself a chimney, or you can use a drill with a paddle bit,” Hedberg said.

Hedberg said the patterns you see in an ice globe are formed by impurities in hard water. Hedberg also shared tips for creating other shapes in ice, and polishing the globes by melting them slightly with a blow torch.

The PuzzleTwist website says, “What you see isn’t always what you get with these new and unique puzzle adventures. Once you’ve been twisted, you’ll never go back.” It’s one studio I didn’t get to that evening, but I saw people walking around with puzzles purchased. They’re online at www. puzzle twist.com, titled “Minneapolis Spirit.”