Addie Smith had five kids at home, including a two-month-old baby, when the tornado hit and ripped off the north side of the house on Penn Avenue near Broadway.  He was going to close the window when he saw the twister, not very far away, coming towards him.  He didn’t have a key to the basement- so he hurried his kids into the back room.  “I was shaking so bad,” he said. When he went back to get the baby, the tornado was about to hit the house.  He lay on top of the baby to protect it while the window crashed through, and the room next door had its entire wall blown off.

The family spent the night at Drake Hotel in downtown Minneapolis, and Addie is still deciding what to do. “It’s going to take a while for them to fix this place,” he said. “I guess we’ll have to find another place to stay.”  Luckily, not too much of their stuff was destroyed—mostly his daughter Noriah’s clothes, as that was the room that lost the side.  Mostly, he’s just grateful that all of his children are safe and no one was injured.

Pam Holder, who lives on Penn near Golden Valley Road, didn’t hear the tornado sirens when they went off. “We didn’t hear nothing,” she said.  She went to take her clothes to the wash and saw the wind blowing the trees down.  She and her kids and her roommate, Kiki Johnson, all went and hid in the bathroom.  The large tree at the side of their house blew the other way, hitting their neighbor’s house. 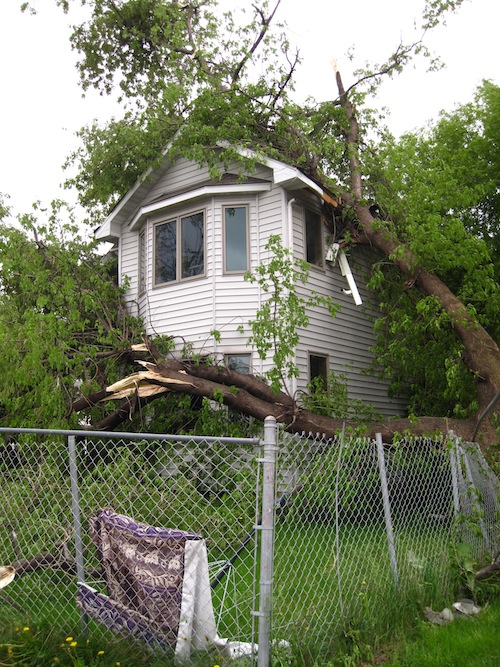 Home next to Pam Holder’s home.

Walking down along Penn Avenue near Broadway on Monday, I saw fallen trees everywhere.  Some have fallen in yards, some on cars, and many on houses.  Many people were sitting in front of their houses, still without electricity.  Some were working on clearing off debris from their own houses, and many were helping their neighobors.  Contractors were out and about, assessing damage, and workers and volunteers were busy at work cleaning up. 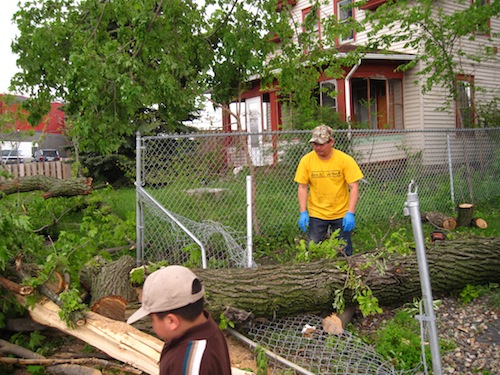 Charlie Vang had a chainsaw and was sawing up the large tree that had broken his fence.  His daughter, 14-year-old Mai Jer, said that she and her mother went to Sam’s Club during the tornado, but her father was at home.  They were greatly relieved that he was all right.  Mai Jer didn’t go to school today, at Anwatin Middle School, because there was no electricity so she couldn’t get ready.  The family seemed upbeat though, grateful that their house was safe and that no one got hurt.

Over at the 5 Points Building, Leroy West, Chief Administrative Officer from Summit Academy, a construction trade school, was speaking with people at one of the centers where people can drop off donations.  He said 15 of his students were volunteering on Monday, with 13 more at the school ready to help when there was a need.  They have been working with Urban Homeworks, which has been coordinating volunteer efforts.

Urban Homeworks reported on Facebook that more than 500 volunteers showed up to help with the cleanup effort.  By around noon they asked that people come later in the week, because they were over capacity.  For a complete list of where to go to volunteer or to donate, visit the city’s website or go here for the North Minneapolis Post-Tornado relief efforts info sheet. 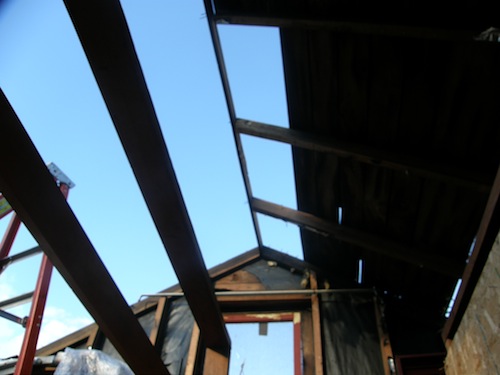 As for Megan Goodmundson, who lives in Jordan, she said she’s not asking for volunteers to help her.  She has insurance, and plans to hire professionals for the damage to her property, including the roof that was torn off her house.

“Oh, there’s mass destruction,” she said of her block, Thomas and Sheridan.  “But it could be worse.  I’m okay.  You know what?  I’ll get a new roof.” City officials came to her house Sunday night, and put a tarp over her house.  Water damage has come in, causing some of the plaster ceilings to cave inside.  But Goodmundson says she feels lucky.  “There’s minimal damage to my stuff,” she said.  “The four walls are just as sturdy as can be.”  Goodmundson slept in her house Sunday night, and boarded the windows. “I didn’t want to leave my house vulnerable to thieves,” she said.  “The most disturbing thing has been the news helicopters.  The make the atmosphere weird.  My blood pressure goes up every time I hear them.” 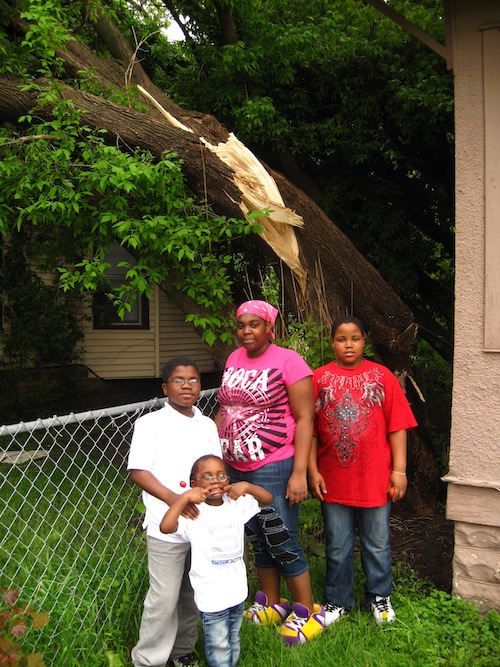