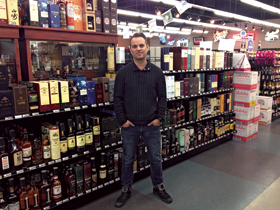 Louis Dachis has been working on West Broadway since he was fourteen years old, when his father opened up Unbank, the first check cashing agency in Minneapolis, in 1984. After studying film at the California Institute of Arts and working in the film and gaming industries, Dachis came back to work on the Northside.

How did he come to be the owner of Merwin Liquors? Dachis explains that in 2005, there was an unlicensed check cashing agency operating out of the 700 West Broadway building. He and his relatives convinced the owner to sell that business, and while the sale was being negotiated, the owner offered to sell the entire building, which included the liquor store, a drug store and restaurant. “That’s how I got into the liquor store business,” says Dachis.

Merwins as a physical establishment has had quite the history. On the website you’ll find a photograph from the 1950s when the building housing Merwin Drugs was still up at the front of the property, before 1984 when its owners, “rebuilt the place and the City forced them to push the building back” to make way for parking, relates Dachis. The irony is that today, urban planners are working hard to undo the results of such policies in an effort to make cities pedestrian-centered again. As Dachis notes, “Isn’t it funny how times change?”

When Dachis took over the building in 2005, it was in rough shape; “We basically took the store and we gutted the place.” But perhaps the most interesting changes that were made concern the new Merwin Liquors’ business model.

While the former Merwins sold a limited offering of beer and malt liquor, with only a handful of higher end bottles locked up behind the counter, Dachis explains, “We took the approach that we were going to stock it right, have all the items out on the shelf and run it like any store you would find in the suburbs. We dramatically expanded the wine selection; our whisky and scotch selections are now second to none. You can’t find a better selection anywhere, let alone in the inner city. So we took a different approach, everyone thought we were crazy. But we made it work, and have been making it work here for seven years.”

Refusing to accept the assumption that everyone in the community wants the same handful of products, Dachis took a chance to expand people’s options. When customers can choose from a diverse array of products, they are in fact likely to try new things.

This attitude- as well as a strategic advertising plan- has also helped Merwins to grow its customer base, pulling in the likes of craft beer lovers from Northeast and Scotch-loving professionals heading home to Brooklyn Center after a day’s work downtown. It’s also allowed them to open up additional locations in Maplewood and Falcon Heights.

Even though the business has expanded geographically, Dachis tells that, “We have a strong connection to the Northside. This is our headquarters. We run all of our stores out of here, we do most of our hiring here, our warehouses are here. We’re committed to the Northside.”

Merwins employs over 40 people total, mostly full-time. The Annual Customer Appreciation Day is somewhat legendary, with free food, bouncy castles, face painting and more, and is traditionally scheduled on the same day as the Spring Clean-Up organized by the West Broadway Coalition.

The newest addition to Dachis’ operations at 700 West Broadway is copy and shipping services (Super Shipping). Dachis decided to use part of the former drug store space for this amenity due to community demand. “People repeatedly mentioned that this type of service was lacking on West Broadway,” he explains.

The shop is now fully equipped to offer black and white and color copies, scanning, printing, fax, internet use, shipping, even mailbox rental. Much like a UPS store, it’s a great resource for the community, especially small businesses that don’t have access to copy machines and other costly equipment. The store is also open whenever the liquor store is, much later than any post office.

Dachis, a member of the Board of Directors for the West Broadway Coalition, believes West Broadway and North Minneapolis are slowly moving towards a more vibrant future. While he’s seen the safety and security of the area improve, “I think the biggest problem is perception,” he says. “But I think that is changing, with people coming in from Northeast to shop here and at Cub. Once people come inside our store they’re pretty pleased.”

He sees the recent relocation of the Minneapolis Public Schools Headquarters and impending arrival of Anytime Fitness to West Broadway as good signs. “I think there is a lot of money being invested on the avenue.”