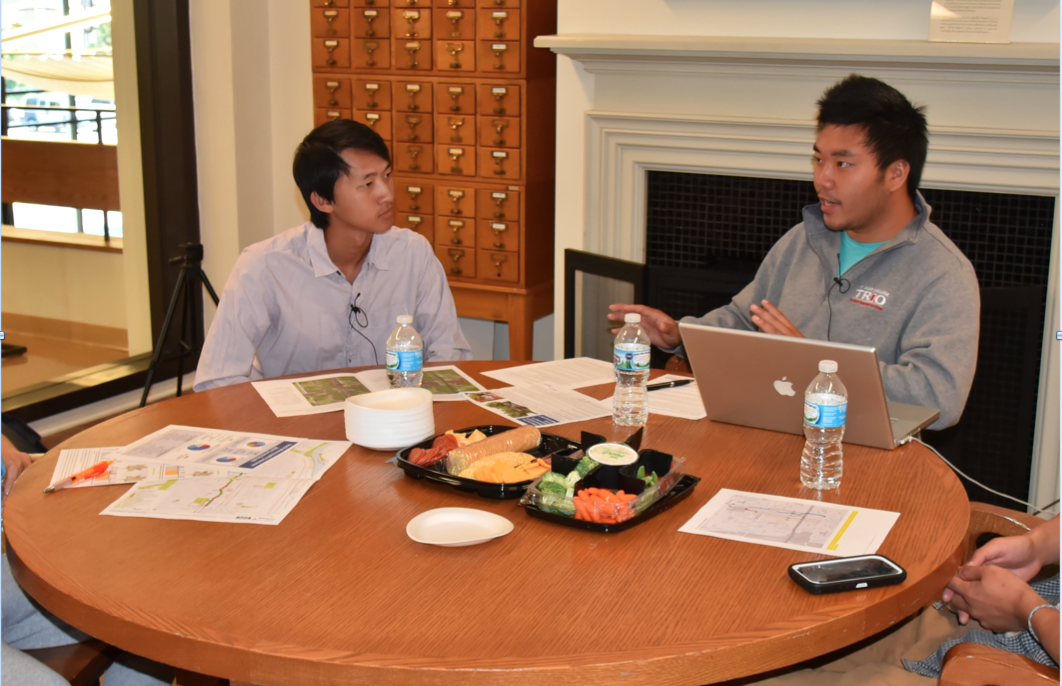 Northside Asian community shared their opinions about a potential greenway during community meetings in 2015.

In 2015, the city of Minneapolis, with the help of 17 community organizations, continued its exploration and outreach for a North Minneapolis greenway, to help share information and collect feedback from community members.

Among the organizations working on greenway education and engagement efforts were three organizations focusing on Northside Asian community members. Based on Minnesota Compass – a social indicators project that measures progress in our state, Asian Americans made up approximately 17 percent of the North Minneapolis community in 2013.

Hmong American Partnership, in collaboration with Hana Media & Development, and the Northside Resident Redevelopment Council, concentrated on educated and outreached to Hmong community members in the area, while Lao Assistance Center of Minnesota engaged Lao community members in and around north Minneapolis.

All three organizations were involved in the outreach and engagement efforts in 2014, and for 2015, the City of Minneapolis and the organizations, wanted to have a deeper understanding of the community’s thoughts around the proposed greenway.

Hmong American Partnership and Hana Media & Development’s collaborative project identified several Hmong community members, including Asian youth, living on or near the proposed route, and with the help of Hana Media & Development, convened the residents to record two in-studio focus group talk shows – one in the Hmong language and one with older Northside youth [Part 2].

The focus group hosts shared information with the panel and public about the greenway and active living, while the guests discussed ideas and presented multiple perspectives about the greenway for those who may be impacted by such development in North Minneapolis.

The podcasts were broadcast at Northside sites frequented by Hmong and Asian community members, and distributed to them on USB flash drives for completing community surveys about the greenway and sharing their opinions about many critical topics such as safety, use, and design. Two Hmong students and residents from the Northside, Mai Kia Lee and Mai Vang Lee, helped with the outreach activities by providing impartial information about the possible greenway, and conducted surveys and brief interviews with Hmong community members.

Regarding her impression about the feedback from Hmong neighbors about the greenway, Mai Vang Lee’s observations were that “some were interested and other weren’t.”

She continued, “Their answers seemed to differ based on their understanding of greenways and the potential project.”

The Northside Resident Redevelopment Council designed their north Minneapolis greenway engagement project as a series of outreach activities, including door knocking, mini-closed street events, demonstration projects, block parties, and open houses. They engage residents around the proposed north Minneapolis greenway to secure strong resident identification and support of a north/south connection that benefits an increase in livability by way of increased access to healthy activities and that also promotes better transportation access and connections to the rest of the city. (The individual who lead the Hmong community engagement for NRRC could not be reached for comment at the time of publishing this article.)

It should be mentioned that Mr. Jay Clark of the Minnesota Center for Neighborhood Organizing conducted an independent outreach and engagement effort for Hmong community members in north Minneapolis in the summer of 2015, which was separate from the City of Minneapolis’ engagement efforts, which yielded different results. An article about Mr. Clark’s outreach efforts can be found at hmongtimes.com and camdennews.org.

Similar to the outreach and engagement efforts of Hmong American Partnership and Hana Media & Development, the results of Lao Assistance Center of Minnesota’s greenway engagement process have been mostly positive feedback with a mix of some concerns from Lao community members in the area.

Of those interested in using the potential greenway, a majority of people (69% average) would like a greenway in north Minneapolis for exercise such as biking, walking and other forms of physical activities. Some other uses of the greenway for Hmong respondents were interested in using it for transportation, gardening, meeting friends, and as a play space for children.

The purpose of the survey was to hear community members’ thoughts about a greenway that may be built in north Minneapolis. The quantitative and qualitative information collected will help shape the project so that it meets the needs and interest of residents. A final community engagement report analyzing and evaluating the outreach and engagement efforts is underway and will be published in the near future. After completion, the published report will be uploaded to the City of Minneapolis’ north Minneapolis Greenway page.

Since 2014, the City of Minneapolis has been measuring the public’s interest in converting low-traffic streets into a greenway in north Minneapolis. The greenway would improve residents’ access to a place to be physically active. Studies show that the closer people live to parks, the more likely they are to get exercise.

The project is in the community engagement phase, and is focused on informing residents about the project and collecting input to help define a new transportation and recreation corridor. The city and its partners completed the first round of engagement activities in July 2014, and a report summarizing the results can be found here.

No final decisions have been made about the proposed greenway, and this phase of gathering community input is important because it will inform future decisions. The City is also conducting a feasibility study, which will also help inform future decisions. A community-based Northside Greenway Council is leading outreach efforts, and a Technical Advisory Committee is overseeing the feasibility study. The Departments of Public Works and Health are collaborating on this project.

David Kang is an independent media director and producer, and creative consultant who has worked in Minneapolis, New York, and Seoul. He is currently the creator and CEO of Hana Media & Development – an independent media development and production firm with the mission of using media and communication strategies to that inspires and compels social change; and the founder and executive director of The DIAL (Data-driven Initiatives through Artists Leadership) – a group led by the creative sector to meaningfully partner the creative community with public institutions and stakeholders of public initiatives.