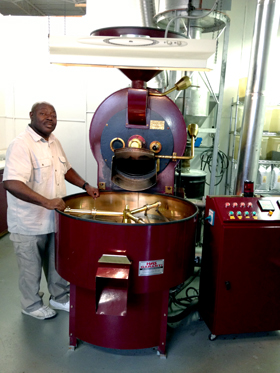 For Samuel Ngwa, owner of Safari Pride Coffee and Dessco Imports, coffee is an important part of his identity and life, and it is not hard to see why. “I grew up in Cameroon, a country in West Africa, where most families live on a compound with about an acre of surrounding land. My father took care of coffee trees, which was a staple commercial product that sustained most of the families. So my brothers and I tended to the coffee when we were not in school.”

“For a long time I didn’t know what coffee was meant for until I came to the University of Wisconsin. Then I realized that everyone was walking around with coffee, coffee, coffee. I then saw the need to revitalize the knowledge I had of coffee and to take it a few steps further.”

After finishing a Bachelors degree in Business Administration and later a Masters in Industrial Technology, he went back to Cameroon and worked for the Cameroonian government and later for a United States Agency for International Development (USAID) program that provided technical assistance to coffee growers.

In 1994 he returned to the U.S. and started importing coffee from West Africa. By 1996 he was also roasting and operating his own business, Safari Pride Coffee. He eventually developed a steady customer base of about thirty local independent restaurants and coffee houses. Unfortunately, many of those small businesses were hurt by the recent economic recession. Ngwa’s response was to start importing tropical foods from his region in Africa in addition to coffee.

Today, under the company name Dessco International Company, Ngwa supplies much of the Twin Cities’ African population with staples such as yucca and oat flours, spices, seeds, black eyed peas, dried shrimp, palm oil and dried vegetables. All Dessco imports are handpicked and brought over by Ngwa himself, who travels to Cameroon and neighboring countries as often as four times per year.

While the tropical foods meet a substantial market demand and help pay the bills, it’s obvious that coffee is Ngwa’s favorite product. “What keeps me going is my passion for coffee and blending different profiles, and seeing that enjoyed by somebody else.” Ngwa describes the process of coffee production like that of wine. He also explains how a person’s coffee preferences and wine preferences are usually related; those that lean towards darker red wines will want a darker, more full-bodied coffee profile, while white wine drinkers tend to choose medium to light roasts.

Not surprisingly, good coffee starts with the coffee fruit. “My base beans are from Cameroon. Actually, some of them come from my father’s place and the cooperative where he and his neighbors sell their coffee.” He supplements those with Sumatran, Cuban, Colombian and Mexican coffee purchased from wholesalers in New York City and Houston. He then prepares his unique blends of beans which are tailored to a particular profile: medium roast, breakfast blend, French Roast, espresso, and so forth. Then coffee is ready to enter the roaster, a large red, sparkling machine capable of roasting up to a ton of coffee per day. With his experienced eye, Ngwa watches until the coffee is the appropriate color for each particular roast.

Ngwa’s deep relationship to the coffee he produces is incredibly unique and as strong as his signature espresso, which he makes with Cameroonian beans. You can’t get his coffee anywhere else, which is why he has several customers that he says, “are hooked,” including eleven individuals located throughout Minnesota and in other states that order regular shipments from Ngwa. 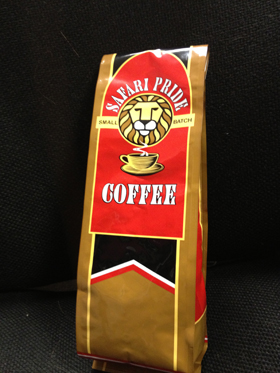 Safari Coffee recently secured a logo and individual packaging that will allow Ngwa to sell smaller quantities. The coffee houses that have been brewing Safari Pride will now offer the packages to their customers.

Safari Pride and Dessco Imports is located in the North Minneapolis Business Center, a Small Business Incubator located on the corner of N 2nd Street and 22nd Avenue N, run by Dennis Werneke, owner of the Center and founder of the adhesives company, American Chemical.

Like many small business owners, Ngwa finds there aren’t enough hours in the day, but he is hoping to expand his business and see his coffee being consumed in the North Minneapolis neighborhoods near his offices. “I would love to supply the coffee to the neighborhood. ” He would like to hire two to three people to help him run his operations and keep up with the demand for his products.