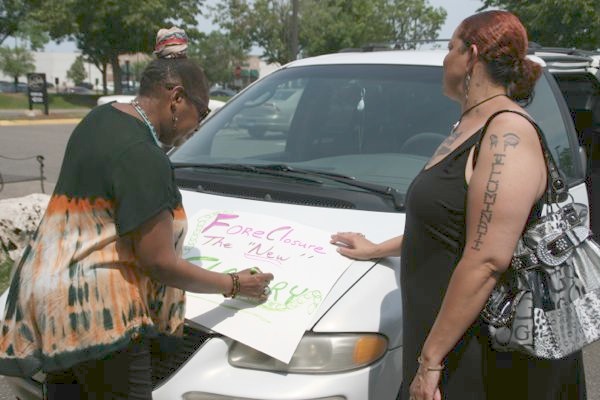 Organizers with the Northside Community Reinvestment Coalition (NCRC) were hoping for more people than the dozen or so who showed up at the Park Square strip mall in Brooklyn Park last Friday to protest against foreclosures. Most of those who came were activists with the NCRC and Jewish Community Action (JCA), along with Rose McGee and Howard Crutcher, whose homes they hope to save.

The plan was to march on the CitiFinancial offices located in a corner of the mall and present a letter, signed by the demonstrators, community leaders and members of the clergy. The letter asked CitiMortgage to rescind McGee’s sheriff’s sale and give Crutcher an affordable loan modification.

Demonstrators planned to ask the manager of the CitiFinancial office to forward their letter to the Deputy Director of CitiMortgage in O’Fallon, MO. They also hoped to get some attention for their cause.

Rose McGee, who had owned her Golden Valley home for 18 years, had been working with CitiMortgage to get a loan modification after being laid off last year. But, while CitiMortgage led her to believe that her modification was imminent, her house was sold at a sheriff’s sale and she was not informed of the sale for more than three weeks.

Howard Crutcher was offered a trial period loan modification with payments higher than he could afford and no one at the company would tell him what the payments would be at the end of the trial period.

“I designed and built my home,” said Crutcher. “I was trying to get caught up with my mortgage. I’d gotten caught up and the next payment was due in two weeks, but the bank told me they wouldn’t accept my payment because I had been behind.”

The group gathered at Mad Jack’s Sports Café at the edge of the mall to sip glasses of iced tea, make introductions and to ready their protest signs and leaflets.

“We’re not trying to close down this branch,” Dave Snyder, an organizer with the NCRC and JCA who had helped plan the protest. “We are sending a message to corporate. We’re not afraid to raise the public profile of these corporations.”

The group left Mad Jack’s just after 2:30 p.m., marched the 200 or so yards to the Citi office and walked in. The office, it turned out, was a small service center with about a dozen phone operators who looked up at the protesters but continued with their calls.

“I apologize,” said Tracy Tschida, the center’s manager, “but we’re CitiFinancial and are not part of CitiMortgage. We are trying to prevent foreclosures here, and your being here is keeping us from that.” When asked, Tschida wouldn’t explain how her office helped prevent foreclosures. “It depends on the customer,” she said. 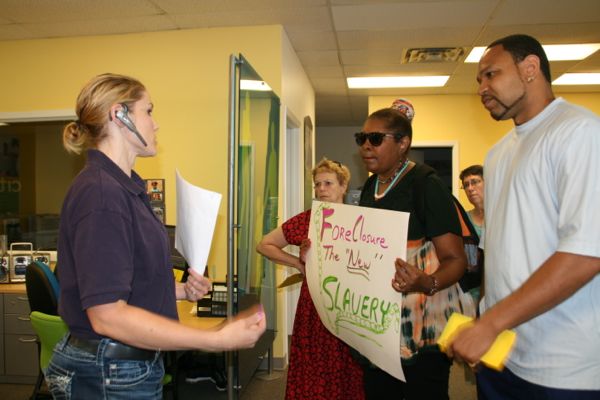 “CitiMortgage is a different company than CitiFinancial,” she insisted. “It’s part of CitiGroup which is a global company.” However, a press release by Citigroup showed that both CitiMortgage and CitiFinancial worked together on foreclosures in 2009 and 2010.

An operator at CitiMortgage’s toll-free customer service department said that while CitiMortgage and CitiFinancial were different, they were both part of the same umbrella company – CitiGroup – and both handled mortgages. But, Sean Kevelighan with Citi’s media department said that CitiFinancial “is now branding as OneMain [onemainfinancial.com] and is in the holdings part of CityGroup.” The company is not a mortgage lender but does consumer loans, including home improvement loans, he said.

The protesters stayed at the service center for about 10 minutes, then moved to Brooklyn Boulevard to wave protest signs and to pass out their flyers. “We’re going to do whatever we have to do to show we are serious,” said McGee. “Next time we’ll show up with a lot more people.”

McGee’s frustration is apparent when she speaks. CitiMortgage first began to work with her when Congressman Keith Ellison wrote a letter to them in her behalf. “I talked with a person there on Wednesday and he said I’d hear back by Friday, or at the end of the next week at the latest. He didn’t get back to me and when I called on the following Friday, they said he wasn’t there.”

She said, “I think it will take a miracle, but I’m calling again the first of the week. I’m just trying to get my home back.”

McGee said she hopes that there will be more protests. “The more people we get out there, the more letters that get written, the more attention we can get. It’s not just for me. There are many, many people going through this.”