It’s about 10:15, and North High School’s sparsely populated hallways show movement as students pass for the next period. Patricia Hosfield, stands in front of her classroom, awaiting the students coming to her I.B. Standard Level Math class. Some of them aren’t showing up. Well, it’s a week before graduation- and senioritis has perhaps afflicted even the best students. Senior Dionte Boyd, who was North’s Prom King this year, shows up, and Hosfield promptly tells him he’s two hours late for his pre-calculus class. He’s come because he needs a little bit of help. Math is, after all, his favorite subject.

Later, Boyd can be found in the library, where a number of other upper classmen spend their free period. A soft spoken young man, Boyd looks pensive when I ask him what he thinks of North. “It’s a good school,” he said. Last year, he thought it was going to be closed, but he’s glad he got to finish out his time there. “I can stay focused here more,” he said. He likes that the classes are small, and he gets individual attention. This year he played basketball, and next year, he’ll be attending Itasca Community and Technical College. 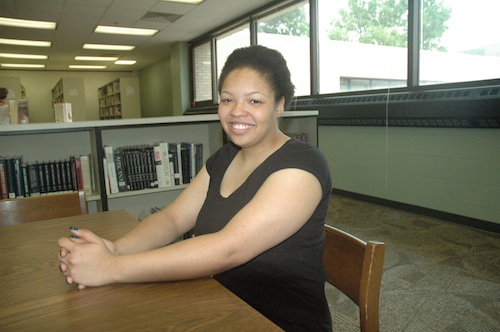 Tyanna Williamson, another senior, is also in the library. Like Boyd, she likes the small classes at the school.  She’s only been going to North for the past two years. Before that, she went to Champlin Park, a much larger school.  “Here it’s better,” she said, “they pay attention to you.”  Though it’s a small school, Williamson takes advantages of the opportunities that are available, taking Spanish, French and Japanese through PSEO, taking I.B. English, and calculus, and participating in after-school programs. She also seeks out opportunities outside of school, such as working with Juxtaposition Arts last summer.

Since she has only been at North two years, she wasn’t too worried about whether it was going to be closed, though she’s glad she got to stay. For her, she didn’t seen many changes in the school — the biggest, she said, was that now the students eat in their classrooms, and the passing times are shorter between classes. 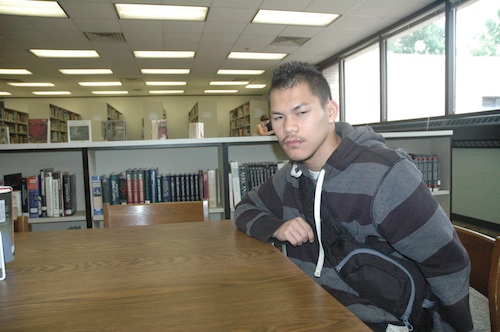 Toua Kong, on the other hand, has been at the school four years, and he said the school has changed a lot since he first started going to North. Though he said a lot of what people say about North are “rumors and lies,” when asked how he would describe North, the word he chooses is “ghetto.” When he was a freshman and sophomore, there were lots of fights, he said, and gang activity. Then, “they kicked the bad people out,” he said.

Kong’s not sure what he’s gong to do after he graduates.  “I need to find a job,” he said. He has to take one summer school class in geometry, before he’ll get his diploma.

North High School principal Peter Christensen arrived at the school on May 22 of last year, hired to oversee the school’s transition as it prepared to phase out its current program and replace it with a completely new school run under the Institute for Student Achievement model. “North Minneapolis went through a terrible spring last year,” Christensen said. The superintendent had decided to close the school in the fall of 2010, and then, after public outcry, decided to try a whole new model. On May 11 2011, education assistant Kristopher Miller was shot to death, and eleven days later, the tornado hit North Minneapolis, destroying many homes.

Christensen said that he has taken a different tack in solving behavioral problems in the school than past principals.  In the past, the default reaction for bad behavior was to “throw the kids out of school,” he said. Christensen said he recognizes that throwing academically fragile kids out of school for behavior compounds the problem, particularly in a population of high poverty students. Under Christensen’s leadership, he has reduced suspensions by half, instead using lunch detentions, after school detentions, and Saturday school.

As a result, test scores went up in the school, and attendence was up 90 percent, he said. 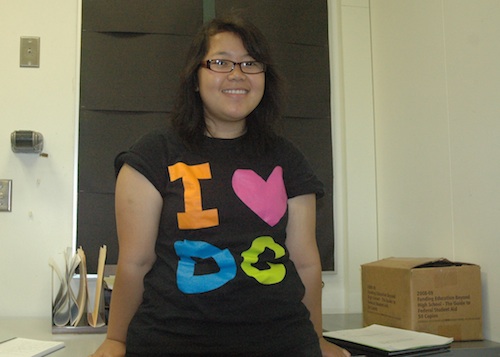 Time will tell what the new North High School model will do. As summer nears, the current seniors who got to continue their education at North, are gearing up to move on to the next stage in their lives. Maicy Lee, the president of NHS at North, will be going to St. Catherine’s University next year, where she plans to major in business and minor in art. She came to the school as a junior, after she found she wasn’t being challenged enough at the Hmong Academy. At North, she’s been able to take A.P. and I.B. courses, and she’s really liked her teachers. She’s played badminton, and served on the student council, and feels that the small number of students allowed everyone to get to know each other. Students of different races all get along at North, she said.