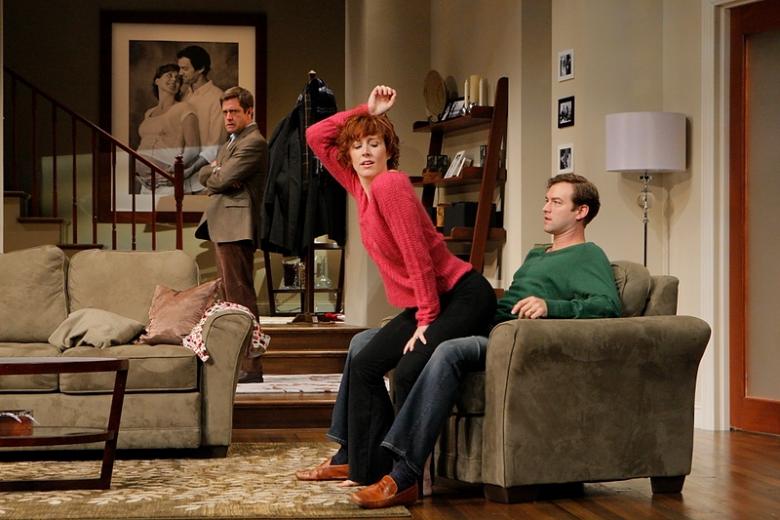 The first half of Dollhouse, Rebecca Gilman’s adaptation of Henrik Ibsen’s A Doll’s House, now on stage at the Guthrie Theater, adapts surprisingly well to contemporary suburban America.  The human flaws of each character seem believable in modern times.  Lies, greed, control, manipulation—these are unfortunately rather universal. The first half of Gilman’s script contains the essential elements of Ibsen’s famous play. It is only in the second half that Gilman veers sharply from Ibsen’s narrative of a woman’s journey to self-discovery. Rather than a victim, Gilman depicts the main character of Nora as a perpetrator of her own destruction through an obsession with consumerist “stuff” and appearances.

Prior knowledge of the original play is a must if you really want to appreciate Gilman’s version. If you don’t remember from 10th grade English, the plot synopsis of Ibsen’s Dollhouse goes like this: Nora Hellmer appears to be a silly woman who her husband, Torvald, treats as a child. She’s been working in secret to pay off a debt to a character named Krogstad that she borrowed when her husband was very ill.  Krogstad takes advantage of Torvald’s recent promotion to blackmail Nora into convincing her husband to give him a loan.

When Torvald finds out about his wife’s deception, and the blackmail, he cruelly tells his wife their marriage will now only be for appearances. The day is saved when Krogstad repents because of his love for Nora’s friend Kristine, but at that point Nora realizes that her husband loves her only conditionally and she decides to leave him. The play ends with a famous door slam, although for a production in Germany Ibsen re-wrote the ending, which he later regretted.

As I was watching the first half of Dollhouse, I was thinking to myself how closely the modern adaptation adheres to the original. The Torvald character, Terry (Peter Christian Hansen), is controlling of his wife, jealous, and also unable to see through the mask that she puts on for him.  Raj Patel, the Krogstad character (Bhavesh Patel), is a disillusioned man fighting to save his reputation after making some dubious financial choices (in Gilman’s version, his business is stem cell research).

As for Nora (Sarah Agnew), we get a sense of her duplicity, of the mask that she wears to maintain her lies and please her husband. Agnew does a good job of showing Nora taking the mask on and off—depending on whether she is alone; speaking in confidence to her friend Kristine; or behaving like a ditzy wife to her husband, who seems clueless that she is putting on a show.

But as the play progressed, I just kept on thinking about the ending. How could it possibly work?  A woman leaving her husband is just not as earth-shattering today as it was in 1879. When Nora slammed the door on Torvald in Ibsen’s play, she instantly became a “fallen woman”—scorned in society with very few options. She would have nowhere to go, and would very likely would become a beggar or a prostitute.

Today, well, she could just go out and get a job. In fact, she probably should have found a job in the first place. And unlike Ibsen’s Nora, who is selflessly working at night to pay off her debt she incurred to save her husband, Gilman’s Nora is not so pure of heart. Yes, she borrowed money for her husband’s rehab, but she borrowed a little extra for the condo, for the oversized portrait of her husband and herself when she was pregnant that takes up a whole wall, for the Pottery Barn furniture that she hopes to one day switch for more expensive furniture, etc.

We get a sense that Nora has created her own destruction by falling into the trappings of consumerist society. Not content to live in an apartment in Albany Park, she wants to live in comfort in a more well-to-do suburb, with nice things and nice clothes. She doesn’t have a job, and her only way of spending money is her husband’s credit card, for which he makes her save all the receipts. She tells Terry that all she wants for Christmas is cash, that she might spend without showing him a receipt—and when he gives it to her, she counts the amount behind his back as she kisses him.

While I appreciated Gilman’s choice in the adjustments to Nora’s character, I also felt that the result of this choice was to leave the audience without anyone to root for. Ultimately, every character in the play (with the exception of perhaps Kristine) ends up being ugly and difficult to care about. It left me with a feeling of deep disgust for humanity—which may well have been exactly Gilman’s intention.