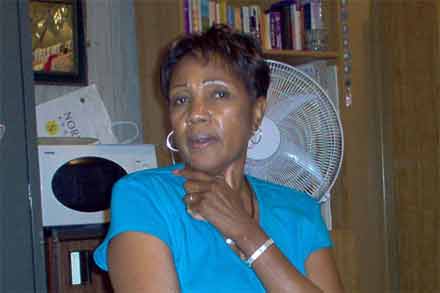 Bernice Gilliard is the director of From Me to You (FMTY), an outreach effort that began in 1996 through Minneapolis’ El-Bethel Baptist Church. When Gilliard learned of a fire that destroyed a family’s home, she set about collecting furniture and other items. Through her outreach efforts at Norwest Bank and those of her husband, the family was blessed with more than they lost.

After having brought a successful closure to this tragic incident, Gilliard resumed her personal life. What she discovered in the days ahead altered her future and the future of many others whom she’d not yet met: Gifts and donations continued to arrive at the church. What could she possibly do with them?

With the help of friends and family, Gilliard arranged a giveaway event for people in need, which was advertised with flyers and radio announcements. When the day arrived, people of all ages and life circumstances arrived. The event went as planned, with one exception — new donations outnumbered those given away! Once again, the church space was full.

This unplanned circumstance in her life troubled Gilliard; after all, she was only one person. “Lord, why me?” she asked. She sought El-Bethel Pastor Charles Robinson’s advice. “Daughter, listen to the Lord,” he said. “There is a need out there, and he has chosen you.”

Despite her full-time career, family and other responsibilities, Bernice undertook the task of founding a nonprofit organization for the community of South Minneapolis. To understand the success of her mission, one need only to look at Gilliard’s past.

Gilliard was the youngest of three daughters born to her parents in Brandon, Mississippi. She was very young when her mother died, but the loss strengthened the bond between father and daughters. Times were hard for the small rural community; yet, her father never complained or worried about the bills. He taught his children to appreciate and share what they had. He also fostered a can-do attitude, teaching them things like how to make doll clothing patterns from old newspapers. One of his daughters went on to become a skilled tailor.

When Bernice’s father noticed that she or one of her sisters hadn’t worn a certain dress for a while, he suggested giving it to one of the neighbor girls. When Bernice replied, “But I like that dress,” he nodded and smiled. “That’s why you need to give it away. You wouldn’t want to give a friend something you didn’t like.”

After finishing junior college in Jackson, Mississippi, Gilliard moved to Minneapolis, where she married and had three children. The marriage ended in 1969 with a difficult divorce, and as a single mother with three children to support, Gilliard sought work. As her father before her, she was a single parent at a difficult point in her life.

Following the assassination of Martin Luther King Jr. in April 1968, many cities increasingly segregated Blacks and other minorities into poverty-stricken areas. The Minneapolis Urban League (MUL) joined a national movement, declaring that social services alone could not eliminate the problems. Working with area corporations and businesses, the MUL arranged 90-day work trials for unemployed African Americans.

Through this MUL program, Gilliard took a position at Norwest Bank. She received a full-time job offer within 30 days. A friend’s generosity provided Gilliard the working attire she needed to dress for work. Coupled with her education, skills, and work commitment, she earned another opportunity. Norwest paid for classes at the American Institute of Banking, and Gilliard went on to become a bank officer at Norwest.

Gilliard remarried in 1984, and together she and her husband have four children and 13 grandchildren. In November 1999, Gilliard retired from Norwest Bank.

Today, Gilliard dedicates her time to FMTY, which now includes a clothes closet for infants, children, and adults. Quality clothing and business attire are provided for men and women seeking to better their lives. For those returning to work, workshops and tutoring are available. Participants learn about proper work attire, job interviews, time management, budgeting, and more.

FMTY offers a small food shelf along with holiday gift baskets. Volunteer training is provided with a focus on preparing teenagers for their first job. Additional services include annual fishing trips for families, a mother-daughter luncheon, a big August giveaway, and furniture collections for needy families.

Working in conjunction with the children’s ministry at the church, volunteers identify and assist children with reading difficulties. In addition to the regular volunteers, teenagers also assist with the tutoring. “This is an important tool in preparing them to be future leaders,” Gilliard says. Additionally, every school year the ministry provides backpacks and school supplies for children.

The services provided for children have particular significance to Gilliard, who is optimistic for the next generation: “If these children we minister to stay in school, get an education, and their spirituality, I think that we will be able to make an impact in the community with the future generation.

“If you can make a difference in one, it is worth it all,” Gilliard added.