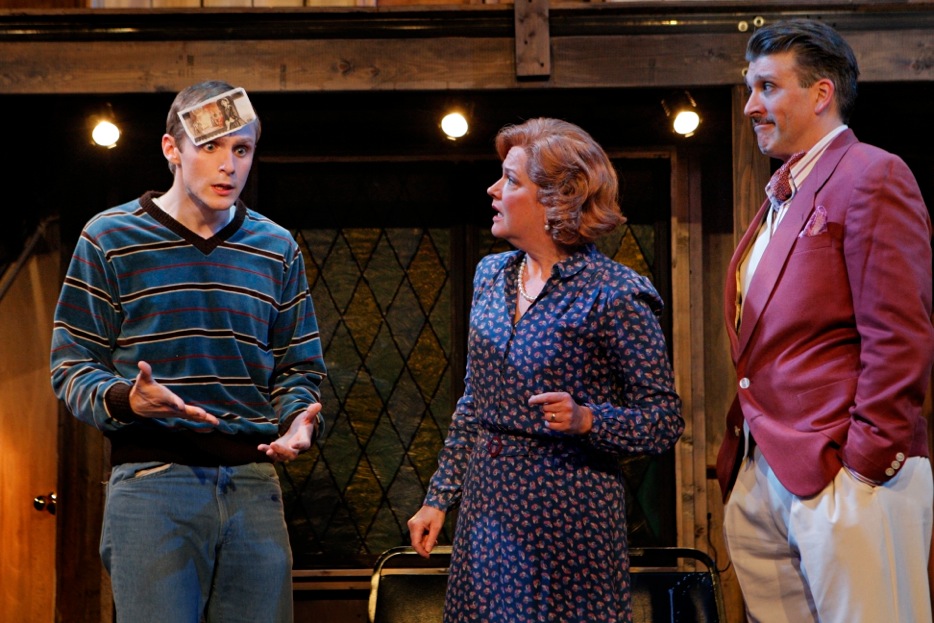 Michael Frayn’s 1983 Noises Off is an inspired comic invention: a farce about a farce. The play’s three acts are variations on one act of Nothing On, a fictional comedy being performed by a hapless British company. The first act is a rehearsal, the second is a performance seen from backstage, and the third is a performance that goes terribly awry. The key to squeezing the maximum comic potential (and there’s a lot) from this scenario is to build the Noises Off looniness until it exceeds that of Nothing On. The atypically hammy production now onstage at the Jungle Theater, though, plays everything so broad that there’s nowhere to build to.

The set design by director Joel Sass and costumes by Amelia Cheever closely echo those seen in Peter Boganovich’s superb 1992 film adaptation, which just reminds anyone who’s seen that film how good the likes of Michael Caine, Carol Burnett, John Ritter, and even Christopher Reeve (!) were at hitting the right tones at the right times. The current Jungle production has just one tone: big and bloozy. The mayhem is technically well-choreographed (no mean feat in and of itself), but much of the play’s character-based humor is lost.

The dry, understated Stephen D’Ambrose provides sips from the same tonic I’d like to have been offered more consistently by E.J. Subkoviak as the pill-popping director of Nothing On; instead, Subkoviak looks like he’s about to have an ulcer every time he’s on stage. As scantily-clad sexpot Brooke, Summer Hagen impresses with absolutely ironclad ditziness. The rest of the cast members—including Cheryl Willis, Ryan Nelson, Bradley Greenwald, and Kirby Bennett—all have their moments but collectively rise to an impenetrable din, especially during the frenzied second act. Most disappointing are the supporting characters Poppy and Tim, played by Kimberly Richardson and Neal Skoy so goofily that Nothing On starts to seem like a subtle character drama.

Frayn’s play was inspired by the observation that the backstage drama at many plays is often wilder and more interesting than what’s happening onstage. That’s absoluely true: real life is amusing, especially when dramatized in such elegantly absurd fashion as Frayn manages in this classic script. The script is so good that it’s hard to ruin—I must admit to laughing hard during the opening minutes of Act Three, but I think I would have been laughing much more often if Sass and his team had let these characters keep their feet on the ground.