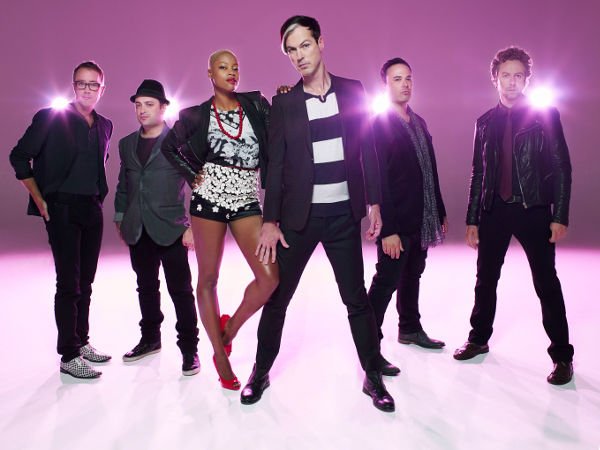 “I love the rush of performing on stage, and watching the emotional responses from the crowd,” says Noelle Scaggs the dynamic co-lead singer extraordinaire of Fitz and the Tantrums. “It’s always a great challenge for me to get the most stoic person in the room dancing and shouting towards the end of the show.”

Fitz and The Tantrums brought their “soul-influenced indie-pop,” to the metro area when they performed club Myth in Maple Grove November 21. The L.A. based band has created a name for themselves with soon-to-be pop classics from their second and most recent studio album, More Then Just a Dream, which was released in May of this year to critical and popular acclaim.

The forming of the band, much like its sound, was from a place of impulse, synchronicity, fun and inspiration. Lead singer, Michael “Fitz” Fitzpatrick formed the band from friend and fellow musician Saxophonist James King, who recommended singer Scaggs and Drummer John Wicks. When Wicks brought in bassist Joseph Karnes and keyboardist Jeremy Ruzumna to the clique of Fitz, the synchronicity was apparent and unstoppable. Within a week they had a gig. Within months they had a following. Five years later Fitz and the Tantrums are on the road with international gigs and television appearances.

Scaggs, who grew up in L.A., is also a songwriter who plays piano, and before joining the Tantrums, fronted her own soul band, The Rebirth. The MSR got a chance to ask the jaw-droppingly gorgeous and massively talented Ms. Scaggs (NS) some questions about life on tour, inspiration and style.

MSR: How is your tour going so far? How do you all stay grounded when on the road?

NS: The tour is good; it’s been a lot of fun with Capital Cites and Beatclub. As far as staying grounded, that normally involves a lot of phone calls back home and catching up with the norms, [and] Twitter.

MSR: Any tour highlights thus far? Any surprises on tour?

NS: No surprises — every night is different. The crowds have been pretty amazing. We have all really been enjoying the energy we have been receiving from our fans.

MSR: How do your fans differ from city to city? How is it playing in L.A. as opposed to other places?

NS: Depends on the type of event; Club events are often more intimate, whereas festival events you find you are stretching your arms as far as you can possibly reach to touch the person you cannot see from the stage. L.A. is really no different from say, New York City or Boston, at least in my opinion. We require our fans to clap and sing a long. At the end of the day it’s basically the city that can get the loudest.

MSR: What are your musical and artistic backgrounds?

NS: Beyond singing and writing compositions, I play piano and various types of percussion instruments. I am also into the culinary world; I love experimenting with food.

MSR: The sound of your music is both eclectic and original and yet refreshingly is still very happy. How did your band’s sound come about?

NS: [It] started with our first EP (Songs From A Breakup, Vol. 1) with Fitz writing the first song, “Breaking the Chains.” He called on our Sax player James King to come in and provide the horns. At the time the sound was leaning into retro soul meets an 80′s new wave kind of vibe. Fitz wanted to vamp on that, he asked James to help him put together a band and wanted to have a co-vocalist and I was recommended.

I think our sound really began developing as we progressed in our live performances and the up-tempo, organic energy that bounced off of the six of us. We found our voice as a unit because of our experiences on the road and really fine tuning our sound from the initial first five songs that had been recorded.

MSR: Your band is described as “soul-influenced indie-pop,” and listening to your music, it is exciting to hear pop music that is complex and soulful, yet danceable and fun. Is that something as a group you were intentional about?

NS: Yes, it is always nice to hear something fresh, something that brings a new energy to what can easily become stale. Our focus has always been on creating great songs — songs that can stand alone with the barest of instrumentation and still stand out against the fully produced version of the songs. Our live show[s] and our experience on the road played a big role in our approach to the new material on More Than Just a Dream. We wanted to bridge the gap between our live and recorded versions of the songs.

MSR: What are your musical influences?

NS: I listen to everything under the sun, keeps me motivated to break out of the box when I need to creatively. I suppose I do listen to a lot of electro pop and alternative rock though.

MSR: In addition to having an original sound, as a band you each have a unique personal style. Have you all always been into fashion or is it a part of bringing the experience of Fitz and The Tantrums to stage?

NS: Yes, in the beginning because of the lean towards the ‘retro vibe,’ I was always wearing a lot of vintage dresses, and the boys had their suits. Now we are leaning towards more of the modern feel. We are giving ourselves the freedom to dress as we would in our everyday, with more of a rock and roll appeal. I feel like the clothes you wear showcase[s] the personality you want others to see. We love looking good!

MSR: There was a well known jazz patron who asked many of the musical greats of the time their three wishes. What are your three wishes? The answer does not have to be on the topic of music or anything specific, just whatever comes to your heart.

NS: [1.] For peace in those parts of the world that have never felt it.

[2.] For more people to begin educating themselves on food, and the foods they put in their bodies, so that they may make better decisions for themselves and in turn their communities.

[3.] For money to not be the make or break on all of us living our lives in the infinite of possibilities.