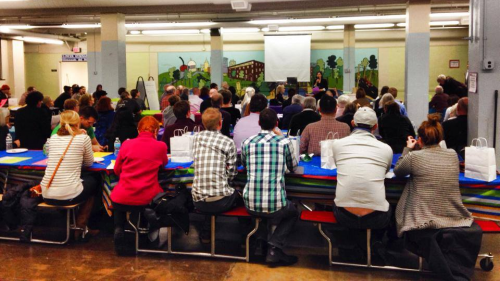 Last week, a Minneapolis City Council member said something obvious regarding the unrepresentative composition of neighborhood associations and their influence on the development process. So, of course, the associations were steamed. Lisa Bender, the offending Council Member, was reportedly pelted with abuse at a Whittier Alliance meeting earlier this week. And here’s an excellent rundown of similar displeasure in Lowry Hill East.

Let me begin by saying I have no use for neighborhood associations. I’m not someone who sees an angry crowd at a televised town hall meeting and thinks, Gee, I’d like to spend more time with those guys. If I’m going to watch Swamp People, I can do it at home.

Clearly, I’m not the only one who has better things to do. Many neighborhood associations, as currently constituted, do not speak for their entire neighborhoods. The populations of Lowry Hill East and Whittier are both 80-90% renter. There’s an age gap as well. More than 62% of Lowry Hill East residents are 18 to 34 years of age; only 18% are age 45 or older (2010 Census). If you’ve ever attended a meeting, as I have, you’d think those percentages were reversed. The only demographic these groups can rightly claim to represent are a small minority of older homeowners.

But let’s say we wanted to create a legitimately representative neighborhood group that could credibly lobby for the interests of its residents. Who better to give advice to neighborhood associations than a guy who thinks they’re useless? I promise I’m only trying to help.

First, you have to answer the age-old question: Who are you, and why are you here? I’m not attending monthly meetings, and neither is 99.9% of the neighborhood you say that you represent. The Star Tribune isn’t coming to your meetings to blog and tweet about them.

So, put everything online. It’s your responsibility to get the information out to your residents, because they’re not coming to you. If you’re only serving the 10 people who show up to a meeting, then you’re not representing a neighborhood.

At a board election in Lowry Hill East, candidates are nominated and immediately deliver a brief speech that consists of something like I’m a 30-year resident and an architect. A short time later, the ballots are cast. I can’t say I feel good basing my vote on that information. Not everyone has an intimate knowledge of their neighbors accumulated over 30 years of devout attendance at meetings. It should be expected of potential candidates to answer a substantive questionnaire and post it to a website well in advance (Whittier does this).

And after the election, tell me how many votes each candidate got. It’s a small thing, but you’ve told us that you want to be a legitimate layer in the process of government–transparency is just the kind of thing good governments do.

Now, there’s nothing wrong with a lack of information if you’re simply an informal social club (with a pile of money coming from the city). But if you want to be taken seriously as the one true voice of an entire neighborhood–as you often claim–then the content of your website is vastly more important than your monthly meeting.

When it comes to the process of voting, my neighborhood association’s election takes place during a five minute window around 8:30 pm on a Wednesday (at the end of a roughly three-hour annual meeting). This is a recipe for non-participation. Hold the voting open all day, all week, or all month; hold it online; hold it by mail; or try an all of the above approach.

Do whatever you need to do to make participation as convenient as possible. If I can’t or don’t care to attend a meeting, I should be able to go to your website and feel like I did. Remember, we barely know that you exist. Put in the time and effort to get our attention, because you need us more than we need you.

Participation Is Your Problem, Not Ours

Neighborhood organizations have no formal power. What power they have is symbolic; and it amounts to nothing if they can’t claim a broad, representative swathe of their neighborhood as participants.

So, when a board member of the Lowry Hill East Neighborhood Association (blogging anonymously, for reasons inexplicable) says, “Choosing not to vote, in essence, is voting,” she’s right. Choosing not to vote is a vote against the legitimacy of a neighborhood group. The organization’s power is proportional to the number of people participating.

Apathy says more about neighborhood associations than it does about the residents who don’t show up. If a group isn’t doing everything they can to increase their constituency–the sole source of their power–then they don’t deserve to have a prominent voice in the process.

At top: The Wedge held its annual meeting and board election on April 16, 2014.