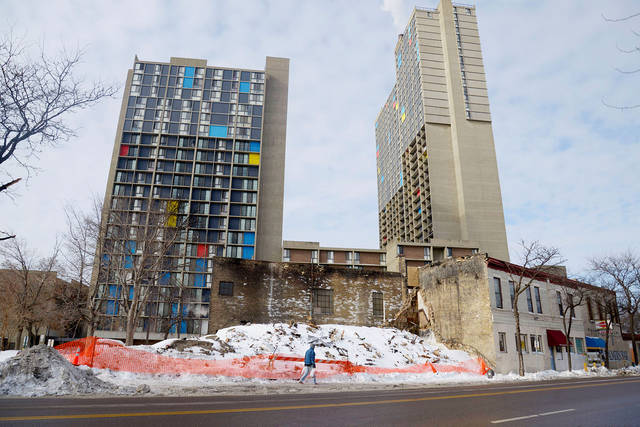 Cedar-Riverside residents are still struggling to readjust after a fire destroyed a building and killed three in the heart of the neighborhood last month.

Fourteen people were injured in the fire the morning of New Year’s Day, seven of whom won’t be able to return to work, said Cheikh Abdi, executive director of the Somali Justice Advocacy Center.

The building housed apartments and a grocery store.

Mohamed Hassan, who lived in the building, was down the street when the fire started, but he lost his friend and roommate.

Hassan was homeless until community organizations recently helped him get an apartment, but he said it’s almost completely unfurnished.

What Hassan wants most, he said, is a TV — or anything to keep him entertained.

Two fire victims still don’t have a permanent home, Abdi said. Four more are still in a hospital, and two are in a physical rehabilitation center.

Hennepin County is currently providing personal care assistants to those who need them, but Abdi said that the help won’t last forever.

Those physically injured in the fire received medical treatment, he said, but there needs to be a stronger focus on providing psychological help for those affected.

Numerous organizations have supported the recovery, he said, including the Cedar Cultural Center, which held a benefit concert on Jan. 24 to raise money for victims.

Pillsbury United Communities, which operates the Brian Coyle Center, has also started a fund and promised to give all proceeds directly to the victims.

Abdi said the American Red Cross was helpful in providing temporary relief for victims, but some are struggling to settle into permanent housing.

A group of lawyers is working to provide legal aid to those affected, he said.

Abdi said though the fire was likely caused by a gas explosion, fault has not yet been determined.

Because some organizations are still collecting donations, there isn’t a collective total yet. Abdi said he expects and hopes it to be at least $30,000.

The fire itself didn’t damage the mosque next door, Abdi said, but water used to fight the fire caused damage. He said the mosque should eventually be able to return to the building, but the temporary loss of the space has left many with no place to pray.

Hassan said the fire has robbed him and the other victims of their livelihoods, and his goal going forward is to recover what he’s lost the best he can.

Ali Ali, manager at Wadajir Grocery & Halal Meats across the street from where the fire happened, said he’s taken more precautions to keep his business safe, like getting a new fire extinguisher and replacing his smoke alarms.

Ali said the fire was particularly sad because those living in the apartment were poor and had a strong impact on the community.

“There’s a lot of sad stories,” he said.

Though the community came together to support the victims, Ali said, he doesn’t think the fire will bring about any major changes.

“People go back to their business,” he said. “Life goes on.”

Despite the generosity of numerous organizations, Abdi said the recovery is still a work in progress.