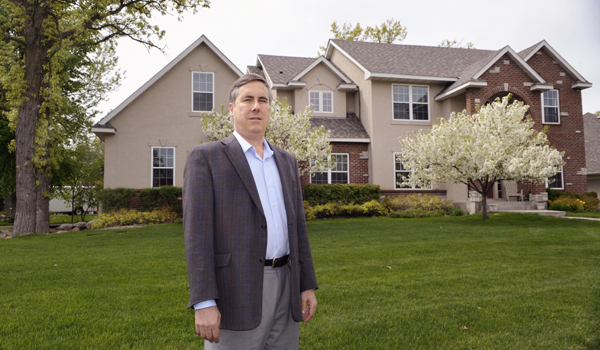 Paul Stutler has lived through what many would consider to be a homeowner’s worst nightmare. Two years ago, Stutler, an Eagan resident, discovered major water intrusion problems in his home – the result of a defect left by the builder. Though state law required the builder to pay for the repairs, Stutler’s home warranty claim was ignored, and he sued to get his house fixed. After months of legal wrangling, he got a settlement, but not before spending $40,000 on attorney fees.

Despite his financial loss, Stutler said he got off relatively easy.

“I know of a neighbor of mine in Eagan who has been ruined by this,” he said.

Minnesota has a home warranty statute that’s supposed to protect people like Stutler. It states that builders and contractors have to ensure that buildings are free of “major construction defects” due to code violations for 10 years after they’re built. When a builder’s faulty work results in major damage to the home, they’re liable for the cost of the repairs.

The trouble comes when builders contest a homeowner’s claim. The resulting lawsuit can drag out for years, costing both sides tens of thousands of dollars in legal fees. But while the builders typically have insurance companies to cover the cost of a lawsuit, homeowners are on their own. Many say the odds are stacked against them.

Take Steve Palmer’s example. After moving to Woodbury six years ago, Palmer discovered moisture problems in his home, and a forensic engineer found multiple code violations. The builder denied fault, and Palmer spent two-and-a-half years and $50,000 pursuing litigation. In the end, rather than throw away more money on a trial, Palmer took what he calls “a really lame offer” for a settlement. The experience drained more than just his bank accounts.

“I missed business, I neglected my family… My marriage is suffering because of it, my finances, everything. I mean, my life is in shambles,” Palmer said.

With days left to go before the Legislature adjourns, lawmakers are on the verge of passing long-awaited legislation that would – hopefully – provide some help to people like Stutler and Palmer.

Sponsored by Rep. Marsha Swails (DFL-Woodbury) and Sen. Kathy Saltzman (DFL-Woodbury), HF3386*/ SF2832 is designed to help people avoid costly home warranty lawsuits. The bill provides an early evaluation process that would be set up through the Department of Labor and Industry. Under the plan, a neutral party would evaluate a homeowner’s claim against a builder to determine who is at fault, what the repairs will likely cost, etc. The idea is to help homeowners and builders better understand their respective situations – and their odds of winning a lawsuit – before they go to court.

Charles Durenberger, the department’s enforcement services manager for construction codes and licensing, said he believes it would knock out many lawsuits before they get off the ground.

“If nothing else, we’ll get rid of those cases at the two extremes – the one extreme where the builder is just digging in his heels and being unreasonable, and the other extreme where the homeowner’s expectations are maybe farther out than they should be,” he said.

The bill passed the House and Senate with overwhelming bipartisan majorities. It currently awaits action by Gov. Tim Pawlenty, who is expected to sign it into law.

For Swails, it’s a victory. She comes from a district plagued by home warranty issues, and has spent the last four years trying to get legislation passed to help homeowners.

“There’s quite a bit of work left to be done, but this is a good step forward,” she said.

The bill doesn’t go as far as many would like, however. Swails herself said it represents a significant compromise from the legislation she really wants. And Stutler, Palmer and others argue it’s too much of a compromise.

Homeowners who have been through litigation say the state’s home warranty law has no real teeth, and that builders and their insurance companies try to game the system. Builders and insurers intentionally drag out the process, they say, hoping the aggrieved homeowners will either give up or settle for less than the cost of the repairs. It’s a charge the builders deny, but Stutler said their incentive is clear.

“Families are getting wiped out because the insurance companies are doing a cold, hard economic calculation: ‘I can outlast these guys,'” he said.

Last year, Swails proposed a fix to that problem. She sponsored legislation that would have required builders to pay a homeowner’s legal costs when a homeowner prevailed in a home warranty lawsuit. To her, it seemed like a reasonable way to remove the builders’ incentive for procrastination and level the playing field for the homeowners.

“There are hundreds of examples in statute where the prevailing party is awarded attorneys fees,” Swails said. “For this not to be applied to homeowners, to me, feels unjust.”

Hearings were held. Palmer and many others testified in support of the bill, sharing their horror stories with lawmakers. Finally, after months of work, the House and Senate passed the bill and sent it to Pawlenty’s desk shortly before adjourning the 2009 legislative session.

Pawlenty vetoed the bill. In a letter to lawmakers, he said the legislation would have further burdened an industry that was already devastated by the housing market crash.

“You gotta be kidding me,” Palmer said, recounting his reaction upon hearing the news.

Frustrating as it was for Palmer and the others, Pawlenty and many Republican lawmakers saw the bill as potentially opening the door to a wave of frivolous lawsuits.

Pam Perri Weaver, executive vice president of the Builders Association of Minnesota, said awarding attorney fees would encourage attorneys to be more aggressive about pursuing litigation. She claims cases like Stutler’s and Palmer’s only show one side of the problem. The other side is that builders have to fend off frivolous lawsuits that drive up insurance premiums and increase the overall cost of housing, she said.

“I think that there are already far too many attorneys in this process, and I don’t think attorney fees (legislation) will solve this problem. I think it’ll make matters worse,” she said.

It’s hard to say which side is right, since there’s no real hard data on home warranty claims in the state. Stutler said that’s one of the problems.

Last fall, Stutler, Palmer and other homeowners gathered with lawmakers in a Department of Labor and Industry conference room for a series of meetings to hash out a compromise on home warranty legislation. Across the table from them were builders, insurers and attorneys. Durenberger presided over the meetings.

As the talks progressed (or didn’t, depending on whom you ask), Stutler said both sides made assertions that no one could confirm or deny because the data simply doesn’t exist.

“A lot of the discussion in that room was basically people telling other people that they knew better than they did. And that makes for a very poor discussion to start with,” Stutler said.

With little hard evidence to construct legislation around, the group eventually came up with the compromise laid out in the Swails legislation.

Reviews of the bill were mixed. Builders and insurers were satisfied, believing it would save time and money. Homeowners weren’t so sure. Stutler said the legislation probably would have helped him in his situation, but others are skeptical.

Ed Seifert, a Shoreview resident who also sat in on the stakeholder meetings, said he felt the process was stacked against homeowners and in favor of the industry. He said homeowners were outnumbered, and that none of the industry lobbyists wanted to talk about attorney fees, which he still considers “the simplest, easiest fix to the problem.”

“It wasn’t that I really had any problem with the (group’s) recommendation. It’s just that, in my opinion, it really doesn’t do much of anything for homeowners,” Seifert said.

Swails admits that more work is needed, and said those advocating for tougher reforms will soon have another day in court, so to speak. She and Durenberger plan to hold more stakeholder meetings later this year to look for a more comprehensive solution.

“Just because we didn’t solve the entire problem doesn’t mean it’s not going to get solved; it just means we have a lot of work ahead of us. And I’m game,” Swails said.

In the meantime, Durenberger said courts in Hennepin and Ramsey counties have taken it upon themselves to compress their schedules for construction defect cases. The effort by these counties, in addition to Swails’ bill (assuming the governor signs it), should at least help “make a dent” in the amount of costly home warranty litigation, Durenberger said.