Nice Ride bike rentals more than doubled in the first two weeks of April compared to the same time frame last year, setting a record for the bike-share program.

Frida Maiers, a kidney research senior scientist at the University of Minnesota, hopped on a Nice Ride bike Wednesday afternoon at the Kolthoff Hall station — the most used in the Twin Cities this year.

More than 6,000 students bike every day on campus, said Steve Sanders, alternative transportation manager at the University’s Parking and Transportation Services. For those who can’t bring their own bike to school, Nice Ride is just another way to get to class, he said.

Maiers’ yearlong subscription is set to expire in May, but she said she plans on renewing it because the system is a great way to stay in shape and enjoy the outdoors.

She started using Nice Ride to get to work almost a year ago. She used to take the bus but stopped when light-rail construction interrupted the bus line on Washington Avenue. The rentable bike stations offered her a solution.

This year, a few stations on campus have been moved to new locations to make access easier as construction work continues.

Station setup was also faster this year, Dossett said, with 114 stations opened for use in less than a week across the Twin Cities.

Nice Ride is planning on adding 30 more stations this summer. Twenty-six will be in St. Paul and four will be in downtown Minneapolis, three of which will be along the Mississippi River close to the Stone Arch Bridge, Dossett said. 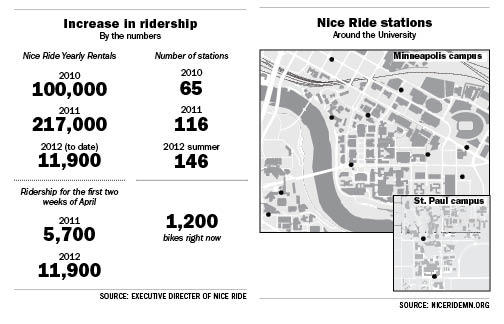 Ridership numbers have been steadily increasing since the program’s launch in summer 2010, with around 320,000 rentals to date.

At its launch, a $250 security hold was charged to a rider’s credit card in case anything happened to the bike. Last year, Nice Ride changed the hold to $50.

The requirement was waived completely at the beginning of this season, which Dossett said also contributed to the ridership increase.

“It was a real problem for us,” Dossett said, “People were nervous to put a credit card in our machine because they were nervous something bad would happen.”

Because just a few bikes have been stolen since the program began and all of them were recovered, Dossett said the security hold was no longer necessary.

The company will give out helmets and prizes during the event and will also host a “slow race” competition where riders will compete to see who can cross the finish line last without falling or riding out of their lane, Dossett said.

Nice Ride will also be giving away helmets for the next two years, which was made possible by Blue Cross Blue Shield, he said.