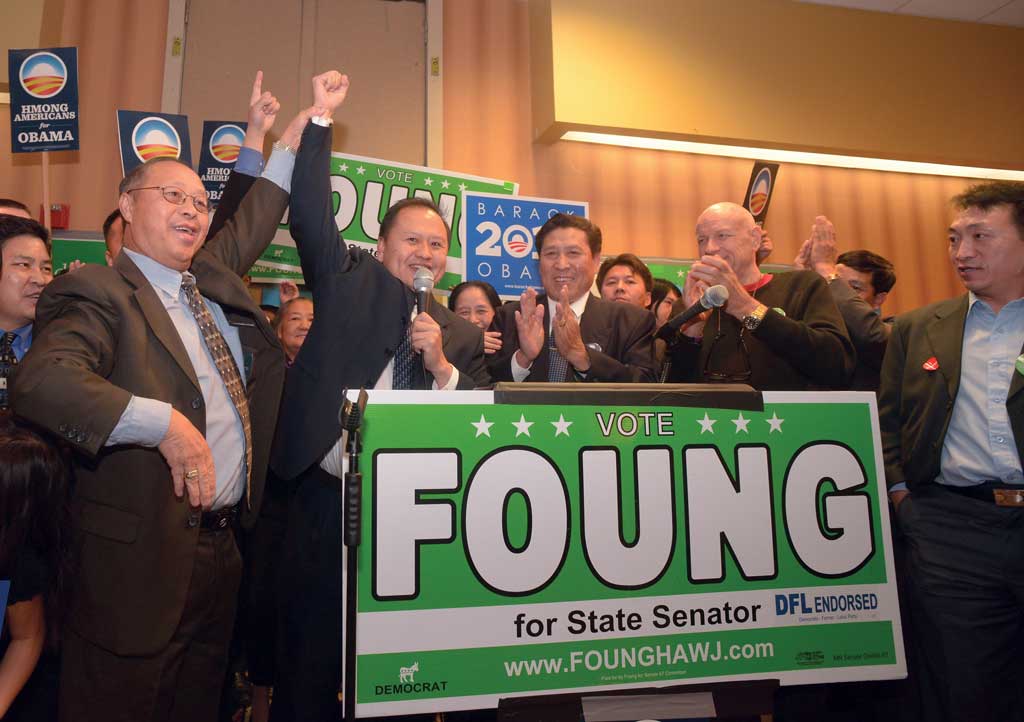 During Mee Moua’s political campaign in 2002, an opportunistic filmmaker by the name of Foung Hawj volunteered to document the historic elections which sent Moua to the state capitol to become the first Hmong person in America elected to a legislative office.

Entitled “The Time Is Right For Mee”, Hawj’s short documentary film would garner praise for capturing the amazing way in which Moua’s campaign was able to energize and mobilize a large number of new voters from the Hmong-American community towards the surprising victory. Hawj’s film, in a sense, became the blueprint on how to win a political race with limited funds and little political might.

A decade later, the filmmaker would find himself on the other side of the camera, making history of his own by winning that very same senate seat, implementing much of the grassroots strategy he had been a part of a decade earlier. 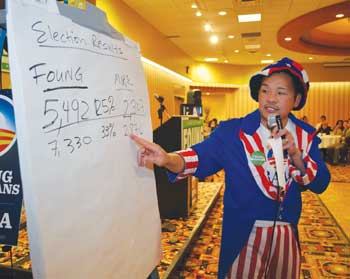 Hawj was able to capture more than 21,000 votes in the general elections on November 6, winning with a 70% margin against his Republican opponent, Michael Capistran.

To put those numbers into perspective, the previous three winners of this senate seat won their elections with a little over 13,000 votes at a 60% margin.

The increase in votes can be attributed to a number of different factors, especially with voter excitement over the hotly contested presidential elections this 2012 election season.

The numbers show that Hawj’s victory was unique in the way he was able to attract a large constituency of non-Hmong voters who contributed to the larger margin of victory.

Aside from Somalis, Mexicans and African-Americans, Hawj was also able to reach those disenfranchised white voters who were fed up with the traditional politicians.

“When I first met Foung, I had my doubts,” said John Lenberg, an East Sider who was a regular at Hawj’s campaign headquarters. “But as we got to know each other, I realized that Foung was my candidate. He’s a man of the people.”

Though Hawj’s campaign worked hard to gain the community’s support, a lot can also be said of Hawj’s 20 years of civic involvement outside of Hmong issues, in particular in matters of politics and the environment.

Minnesota DFL Chairman Ken Martin was adamant that nobody else he knew from the Hmong community could have accomplished this victory. “He alone could have mobilized the community the way he did,” said Martin of Hawj’s victory. “He’s a very forthright, passionate leader who will stand up and fight for things he believes in. Quite frankly, that the kind of leader we need in the state capitol.”

Despite the huge margin of victory, the road to the state capitol was not an easy ride for Hawj. He was defeated, rejected and challenged every step of the way.

In 2010 when Sen. Moua announced her sudden retirement from the senate, Hawj entered the race to replace Moua along with a half-dozen other political hopefuls, including three other Hmong candidates. The split votes would propel John Harrington, the former St. Paul Police Chief, to win the DFL endorsement and eventually be the replacement for Moua.

In fact, Hawj didn’t even win among the four Hmong candidates. Both Chai Lee and Vang Lor attracted more votes than Hawj.

Learning from the 2010 defeat, Hawj was very deliberate when he announced his candidacy early in the 2012 election season. In addition to deterring other Hmong candidates from entering the race, the tactic was also successful in blocking the DFL from making any endorsements at their convention, forcing Harrington to withdraw his candidacy just days after.

With the incumbent out, DFL heavyweights on the East Side decided not to back Hawj but instead persuaded party insider Robert Humphrey to throw his name on the ballot.

Given Humphrey had the endorsement of nearly every political entity in St. Paul including elected officials, the labor unions and the police, it looked like Humphrey was going to win the primary elections rather convincingly.

However, Hawj would prove to be undeterred by the odds in front of him. Rather than give up, he pushed himself and his campaign even harder to reach all potential voters.

“I’ve personally knocked on hundreds of doors and shaken over 10,000 hands over the past nine months,” proclaimed Hawj. “I may not have won endorsements from organizations, but I’d like to think that I was able to reach every corner of the East Side and was able to connect with all the different people in our diverse community.”

On the evening of August 14 when all the primary votes had been tallied and it was clear that Hawj had pulled one of the most surprising victories of this political season (with a 245 vote lead), a stunned Humphrey called to congratulate Hawj.

One of Hawj’s campaign managers, Andreas Jurewitsch, fielded the call and was instantly amused by the new attitude that Humphrey displayed.

“Humphrey had arrogantly told me that Foung was a nice guy, but that he would never win this election,” Jurewitsch shared at the victory party. “But I guess nice guys do finish first after all.” 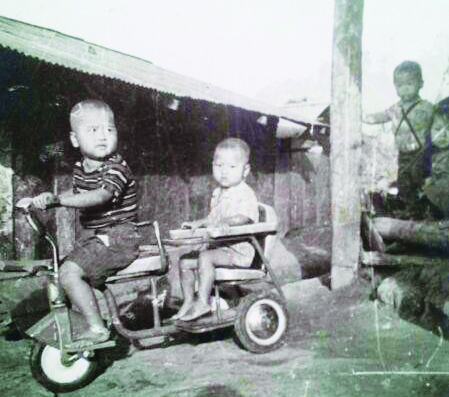 Born in 1965 in Long Tieng, Laos at the height of the Vietnam War, Foung Hawj was one of the very first Hmong babies whose delivery took place inside a modern hospital with real doctors and nurses.

His birth coincided with the completion of the Long Tieng airstrip, the secret airport nestled deep in the jungles of Laos where American troops carried out their secret missions in South East Asia.

This airport saw thousands of flights each week and was often referred to as the “busiest airport in the world” at the time. And Foung’s father, Hawj Cai, was at the very top of the command chain as the coordinator of flights in and out of Long Tieng.

One of only a handful of educated men at the time, Hawj Cai’s command of the English language enabled him to be in direct contact with the Americans and Gen. Vang Pao himself.

“Our house was just a block away from the General’s house,” recalled Foung. “We used to play with some of his kids. It was a fun time in my life.”

When Long Tieng fell to the communist troops in 1975, Foung’s family would find themselves among the tens of thousands of other families who would flee Laos to the safety of other countries. 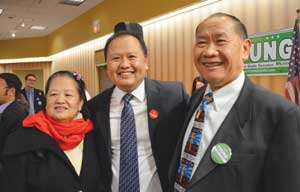 Foung was ten-years-old when they arrived in America. A quick stint in South Dakota and then Houston, Texas would eventually lead them to Kansas City, Kansas where he and his four younger brothers and one sister would “grow up, be kids and go to school.”

At Foung’s victory celebration, his father confirmed that as his eldest child “Foung has always shown himself to be a leader and a good son.”

After graduating from the University of Kansas with a dual major in media arts and computer science, Foung visited Minnesota to attend the July 4th Soccer tournament in 1990 when he saw a job posting in a local newspaper seeking a producer for a new Hmong television show called, “Kev Koom Siab”.

With his education and his passion to work for the Hmong people, Foung sacrificed his high paying computer programming job and decided to take the risk to become the producer and host of Kev Koom Siab. 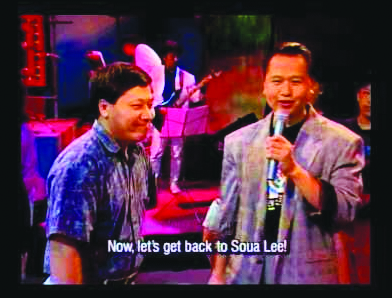 Before newspapers and radio became the staple of Hmong media, thousands tuned in each week to watch Foung share stories from the Hmong community. His curiosity and desire to bring entertainment value to the show brought viewers into different corners of the community that hadn’t previously been explored by the media.

It isn’t a stretch to say that Foung was a pioneer of Hmong media and was easily one of the most recognizable figures in the community. As his popularity grew, Foung would also find himself at the forefront of civic growth for the Hmong in America. He was a charter founder of organizations such as Hmong National Development, Hmong Chamber of Commerce and the Hmong DFL Caucus.

A loyal supporter and technical expert, Foung worked behind the scenes to help numerous campaigns find success. Among some of these are Cy Thao, Kazoua Kong-Thao and Tim Mahoney – all of whom were on hand to support Foung at his victory celebration.

When the opportunity arrived to fill the empty seat vacated by Sen. Mee Moua, Foung felt compelled to finally step from behind the scenes to take on the leadership role that seemed to fit so right.

“Even though I’ve never thought of running for office myself, the opportunity to utilize my life’s experiences and passion to help others was too compelling for me to pass up,” explained Hawj. “Getting elected is just the first hurdle. The next four years is where the real work begins.” 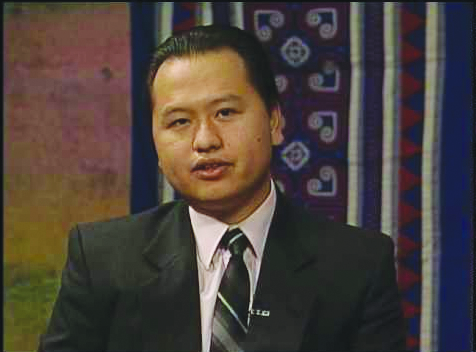 Although he feels fortunate that Mee Moua and Cy Thao were able to build some equity for Hmong legislatures, Foung is fully aware that he will need to forge his own path at the capitol.

The official swearing in will occur in early January, but in the meantime, Foung has been doing his preparation work, getting to know some of his colleagues and choosing the office he will be occupying for the next four years.

As for committees, Foung has chosen to focus on environmental issues and job creation. Also, he will keep his campaign promise of keeping his office doors open for constituents and to maintain the flow of communication through forums and scheduled town hall meetings.

Asked how he will handle the pressure being a leader, not only for his district, but also for the entire Hmong-American community, Foung is confident that his life’s accomplishments will prepare him for what is ahead. 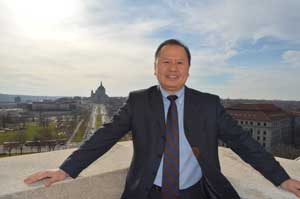 “I got elected to be the senator for the East Side of St. Paul and I will do that job to the best of my abilities. As for being a leader in the Hmong community, I have an obligation to be a good role model for all. I wont get in the way of our established leaders, such as the 18-Clan Council and other forms of leadership in our community.”

One of the first pieces of legislation that he is exploring is the Hmong Veterans Bill that had been previously floating around at the capitol. He hopes work with Veterans groups and other law makers to ensure it moves forward. 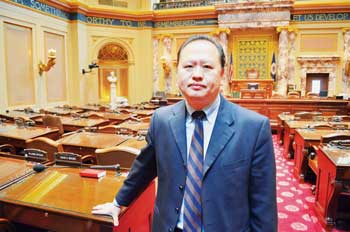 Since winning the elections, Foung says he stays up at nights exploring ways he can improve Minnesota and can’t wait to get sworn in.

“Winning the election was only the first part,” said Foung with his broad smile and notable dimples. “The next four years is when the real hard work will take place.”