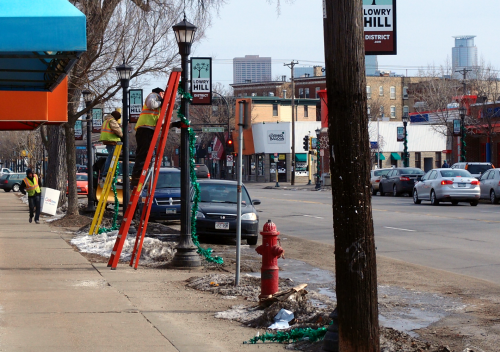 Tis’ the season we go from snowy sidewalks, to slushy, and then icy ones. And in many ways that’s a hopeful sign. A promise of warmth and fun, of walks around the lakes, Open Streets, Nice Rides across the Stone Arch, and everything else you can fit into 7 months of t-shirt weather.

So while you’re in a good mood regarding the impending change of season, I need you to make a promise. Make a Next Year’s Resolution to your neighbors that you’ll do everything in your power to keep them a little safer next winter.

That is to say: Clear your damn sidewalks. 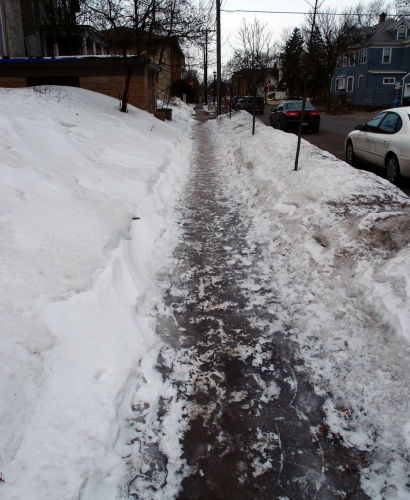 Right: These pavements are paved with ice sheets

This is a tale of a journey fraught with thrills, near-spills, and the eventual triumph of one man over mother nature and the neglectful property owners determined to put him on his ass. It was biblical. Thus sayeth the pedestrian: I am returned! And I will immediately take up my laptop to compose this message to my city.

It was a 5-block walk to the UPS store, followed by a routine pit-stop at the grocery store. A block from my house I turn up a section of west 26th street that I don’t typically walk during winter (Now keep in mind that 26th street is a one-way, two-lane, high-speed pedestrian-terror, even in the warmest of times. But that’s an entirely different topic). I came upon a woman, a full foot and a half shorter than me, and apparently a grizzled veteran of this stretch of 26th street, who shook her head in sympathy as I climbed over a crunchy snowbank. I slipped, then caught myself as I stepped back onto the edge of an icy patch of sidewalk. She smartly moved herself into the road–squeezing herself between parked cars and snowbanks to avoid the ice patch I had just traversed.

And then another 30-foot stretch of ice. 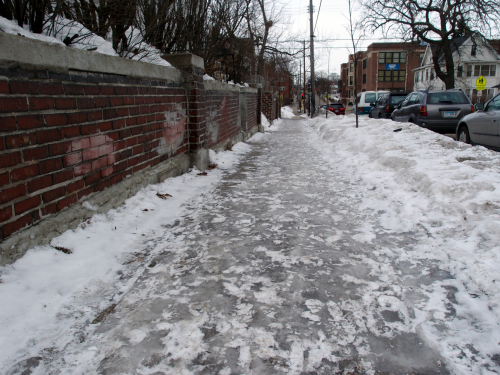 More sidewalk ice. In case you’ve never seen it before.

At one point I was trapped mid-block. Prudence told me to cross over another crusty snowbank (of uncertain structural integrity) and double-back across 26th street. So I did, eventually making it to the safety of Hennepin Ave, where I came upon a blind woman finding her way with a cane. She clearly knew what she was doing but I felt compelled to chase her down and ask if I could help. Before I caught up she had made it to her bus stop, so I walked on by.

I understand this story is no revelation. It’s entirely typical. But… blind people are walking our sidewalks! These sidewalks. In this condition. This blind woman can’t drive a car. Walking is literally her only choice–if only to make it a few blocks to the bus stop. That this is typical is a massive civic failure. 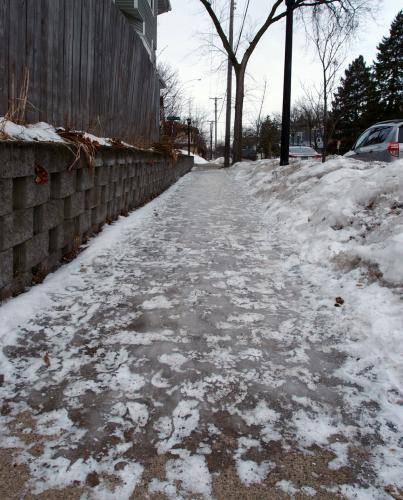 Right: I’ve got a million of ‘em. Same stretch of 26th. One after the other.

I’m a youngish, tall, long-legged, athletic man (and, parenthetically-speaking between you and I, dreadfully handsome). I’m the type to shrug off the snow and the cold when others complain. If these icy sidewalks pose a serious hazard to me, what does it mean for the vast majority of people less physically capable? Like I said, blind people are walking our sidewalks. And people of shorter stature who can’t easily hop from one bare patch of pavement to the next. And the elderly, who I’m guessing more often than not just stay home to avoid this treacherous ice. And the disabled. And children walking back and forth to school. And drivers walking 3-blocks to and from their cars because of parking restrictions. And human beings of all stripes and abilities who just need to walk somewhere. If, in a perfectly walkable neighborhood (geographically speaking), we all have to get in a car to safely move ourselves 3 blocks to the grocery store, we’ve got a major problem on our hands.

On my short walk down 26th street, it seemed every block was covered in ice. But it wasn’t really every house on every block. See, it’s actually possible to clear the snow and ice from a sidewalk. I know this because some people actually do it. I salute these people–in my mind–every time I walk by their respective houses, casually peering through their windows (as non-creepily as I can) hoping for a glimpse of this heroic person or family, the proprietors of such a pristine sidewalk. Sometimes a sidewalk is so beautifully maintained that I’m struck with pangs of jealousy: “So this guy really thinks he’s something, doesn’t he? I bet he’s not half as amazing as his sidewalk implies.” Let me emphasize this again: if you’re one of the heroes, I salute you. 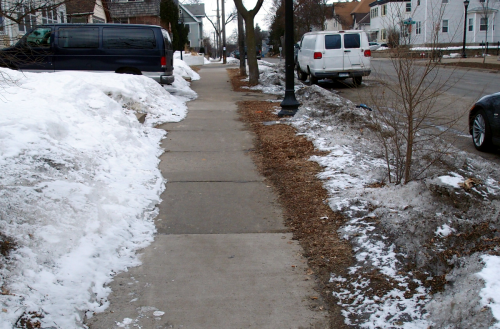 I’ve seen prettier jobs, but this property owner is still a hero.

During my walk I tried to make a mental note of every sidewalk-posing-as-ice-rink so that afterwards I could Google map them and report each address on the section of the city website dedicated to sidewalk-ice scofflaws. But there were so many. I gave up. And besides: does the city really take prompt action on those reports? Are the penalties onerous enough to elicit compliance? I’m doubtful.

Do we need to do as Montreal does and add sidewalk snow removal as a municipal service? Increase the fines and/or the budget for enforcement? Or do we need to publish pedestrian trail maps of the city, a la bike trail maps, to indicate ice-free routes (call it Map of Minneapolis Heroes)? I don’t have the answers but I do know we need to do something.

As I write this, pedestrian safety is in the news in the context of traffic injuries and deaths. Pedestrian skeptics (I’ll call them) will find one reason or another to blame the pedestrian and excuse the driver in these cases. Stay out of my way. Stay out of the street. But what if the street is your safest option? The street should never be a sanctuary for pedestrians. There can be no comprehensive approach to pedestrian safety in Minneapolis that doesn’t address our seasonal sidewalk snow and ice neglect.

When the issue of sidewalk snow removal comes up–which is not nearly enough–I sometimes make the mistake of reading the comment sections. It’s Minnesota. It’s a fact of life. Get used to it. That’s true. Snow and ice is a fact of life here. We do just need to deal with it. But this goes for property owners too. The snow comes and it comes. Every year the snow comes, and we clear it from our roads. When the snow falls in southern states, as in Atlanta earlier this year, it’s a disaster. It’s different on Minnesota roads. The streets, the roads, the highways: they get our attention, as they should. We make it a priority to keep people safe as they travel on our roads. But for pedestrians, on sidewalks throughout Minneapolis all winter long, it’s snow-falls-on-Atlanta-style Armageddon.

So I beg of you, property owners, and City Council members with the power to compel them–before all the snow and ice disappears from sight and mind–make a Next Year’s Resolution that you’ll clear your sidewalks and help keep your neighbors safe on their travels.