If you weren’t at the State Theater on Sunday night, you missed one of the best concerts Minneapolis has seen in a very long time.  The fact that the show didn’t sell out immediately was rather disappointing.  North Minneapolis has already felt the arms of over 5,000 volunteers wrapped around our community in support, but a show of this caliber deserved more people watching.  Thankfully, I took plenty of video footage.

Before we get to more music, here’s a fun fact:  The Northside Benefit Concert took place on Sunday June 12th, and NOT, as I had mistakenly put in my calendar, Saturday June 11th.  This mistake was compounded when I immediately bought two tickets the instant they went on sale, and invited a friend along for the show, which I found out later, was on SUNDAY.  In spite of the clear instructions on my ticket, I just assumed that if we were going to get this many amazing local artists in one place on a weekend, then an event of such magnitude would have to be on a Saturday.

Not wanting to be late, my companion and I unknowingly arrived a full twenty-four hours ahead of time.  Since this would be the social event of the summer, I put on a suit and she wore a sleek outfit with shoes that looked so great they had to be tremendously uncomfortable.  We excitedly posed for pictures outside the State Theater, and went inside to find…nothing.  It was a veritable ghost town.  “Oh no!” we thought, “Nobody cares about north Minneapolis!”  Upon a closer examination, however, we determined the correct date for the concert.  As it happens, my Android phone is synced with Google, but apparently Google did not notify the dozen or more performers, their stagehands, and other appropriate staff that everybody needed to arrive a day early.

I’m telling you this, dear readers, because my friend is so pleased with the opportunity to talk about how shameful this all was for me that you’ve probably already heard about it.  And because the concert was so amazing that it easily offset the temporary (or if she has her way, permanent) embarrassment I have suffered.

One of the first acts was the Billie McLaughlin Group, whose namesake suffered from focal dystonia. The nerve disorder meant he could no longer play guitar with his left hand and had to retrain himself to play some chords right-handed. He played this song as both a personal testimony and as a way to reach out to our community:

Watch that hyperlink to the CBS story, if you have time. The videos above and below have McLaughlin playing straight chords and strumming, not the intricate finger-picking that he displays in the news story. His comeback is nothing short of amazing, and we can only hope that north Minneapolis can mirror it.

There were plenty more phenomenal acts, including a rendition of Bob Marley’s “Redemption Song.” This has been a favorite jam session piece with Hillside Chronicle and the Hawkman, but we can’t hold a candle to this performer.

The biggest surprise of the night came when a lifelong resident of north Minneapolis was brought onstage to play the piano. She said she’d give one of the emcees a spanking for revealing her age, but if any of us are this capable at ninety, we can count ourselves extremely fortunate.

I took classical piano lessons for eight years, but I’ve spent more time forgetting than I did learning. Still, I remember the grace and poise one gets from attaining the perfect form of the hand, and how easily music flows when that happens. To this day, there is almost nothing that makes my heart flutter more than watching a woman master the piano. Alas, she’s ninety.

Keri Noble on the other hand, may be out of my league but at least she’s close to my age:

Ms. Noble’s form isn’t quite as perfected as our first piano player, but she’s got a few decades to catch up.

Our Mayor and Senator Klobuchar spoke:

Larry Long and his troupe made sure we got on our feet:

By this time, my batteries were running low, so I saved the last of them for the band I knew would be my favorite performer of the evening. I present to you Soul Asylum:

There were so many other outstanding artists – Sounds of Blackness, Brother Ali, Cameron Wright, T. Mychael Rambo, Toki Wright, The New Standards, and GB Leighton, just to name a few. Many had to travel across the country to be here, and all of them could have spent their time elsewhere at locations where they could play more than two or three songs in one evening. Yet time after time, the emcee would introduce them by saying that the person or musical group “jumped at the chance” to be in Minneapolis supporting our city and our community. So from the bottom of our hearts, north Minneapolis thanks everyone who put together a tremendous benefit concert on Sunday (not Saturday). 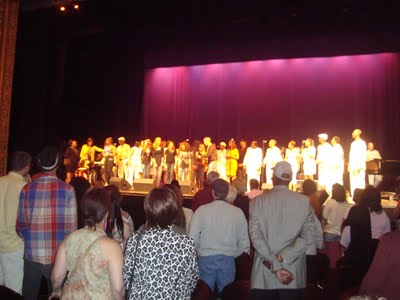 Photos and video by Jeff Skrenes