Left to right: the #BlackLivesMatter march, Frank Brown, and the MLK playground march.

SAINT PAUL – The big news this week was the #blacklivesmatter march to the Minnesota State Fair, which spurred all kinds of online racism and support for the demonstrators. The Minnesota Spokesman-Recorder’s Mary Turck was at the march and wrote a richly illustrated essay on the march. Here’s part of her story:

Along the way, drivers on the other side of Snelling honked horns or pumped their fists in salute. On Como Avenue, busloads of Edina students and band members called flashed peace signs and joined in chanting, “Black Lives Matter! Black Lives Matter!” Women at tables in front of the Muslim American Society waved and smiled. Positive responses far outnumbered the one angry man at Snelling and Como and the few angry hecklers shouting from inside the fairgrounds. 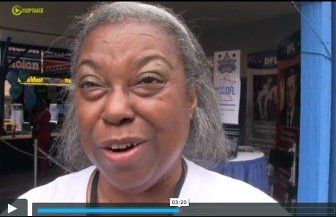 Meanwhile, inside the gates The Uptake’s Bill Sorem was at the fair talking to fairgoers about the march, and gathered a diverse range of thoughts from people, including an interview with Frank Brown [pictured top] and Sherrie Pugh [pictured] co-chairs of the DFL African-American caucus.

Elsewhere, on his blog, Thoughts for a Better World, Dick Bernard uses the #BLM march to reminisce about a 2008 protest event called the Peace Island Conference. Here’s his story:

The assorted police forces from all over (it seemed) were mobilized to prepare for war against a rabble of crazed peaceniks who would certainly descend on St. Paul to disrupt the Republican National Convention in downtown. Bizrre weapons, like the gunboat on the Mississippi, appeared to protect citizens from the rabble. Police dressed like transformer characters were an ominous presence everywhere. The media focus was on occasional incidents.

Finally, Patrice from CulturalConstruct has a whole bunch of State Fair photos, while The Uptake interviews Todd Gramenz [pictured below], who is one of the vendors at the controversial “black lives matter/all lives matter” tee-shirt booth on the Fairgrounds. Gramenz is from the East Side of Saint Paul, and has an interesting take on the modern civil rights movement. 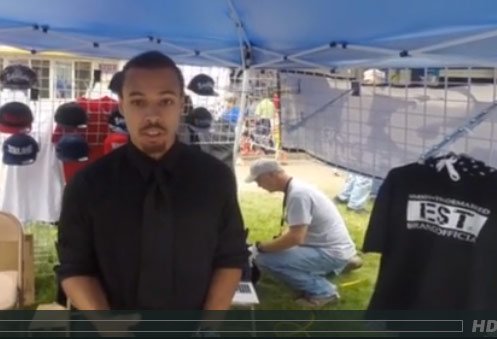 KINGFIELD – The Spokesman-Recorder has a must-read story about the a new civil-rights themed interactive playground at the Martin Luther King Park in South Minneapolis. To celebrate the opening of the park, there was a march [pictured, top] to the Nicollet Avenue location from the Sabathani Community Center, across the freeway on 38th Street. Paige Elliot’s story and photos are terrific.

THEATERS EVERYWHERE – Finally, also in The Spokesman-Recorder, Mel Reeves pens a nice review of Straight Outta Compton, which is still the #1 movie in theaters across the country. Here’s a taste:

Straight Outta Compton shows the violence that defines the U.S. and its disdain for Black people. We see an America whose police beat Rodney King for all the world to sees, and even the violence of the corporate music scene, which has historically ripped off artists — especially Black artists.

When Ice Cube said that his rhymes were reality rap, that was true for the most part. In fact, the movie puts the viewer right in the middle of their world when the tank-like battering ram smashed in the front door of a drug den and actually hits someone. Somebody watching the movie with me asked if that happened — yes, that happened.

Given the momentum around combating police violence nationwide and in the Twin Cities, the rest of Reeves’ review is well worth reading.