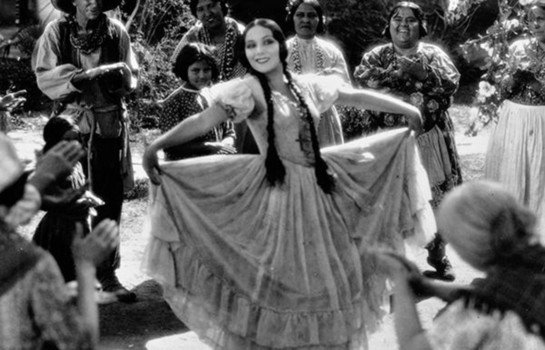 It’s estimated that roughly 70 percent of all silent movies have been lost forever, victims of neglect, poor storage of fragile negatives, or outright destruction. Around the world, film scholars are racing the clock to find and preserve as many silent films as possible, scouring film archives, attics, antique shops, old barns and even Craigslist for leads, however slight.

When a supposedly lost film is found and saved, it’s a bit of a miracle. On Sunday, August 10, 2014, 7:30 pm, the Heights Theatre in Columbia Heights will present one of those miracles.

The film is the 1928 drama Ramona, starring Dolores Del Rio and Warner Baxter, a film that was considered lost for several decades. Based on a classic 1884 novel by Helen Hunt Jackson, Ramona tells the tragic love story of the half-Indian Ramona and the full-blooded Indian Alessandro, set in Southern California in the early days of Anglo settlement in the region.

The Heights is one of the very first theaters in the United States to show the restored film, which so far has only played at UCLA and the San Francisco Silent Film Festival. For the Heights’ showing, Karl Eilers will provide live musical accompaniment on the theater’s Wurlitzer organ.

Heights owner Tom Letness first heard about the Ramona restoration in March 2014, while talking to Library of Congress preservation specialist Lynanne Schweighofer. He asked Schweighofer about silent movie restorations he might be able to show at the Heights, and she mentioned the discovery of Ramona. Film preservationists at the Library were hard at work preparing a restored print for a scheduled premiere at UCLA on March 29, 2014. Letness leaped at the chance to be among the first theaters to show Ramona in over eighty years.

There have been four different film adaptations of Ramona: a 1910 one-reel film directed by D. W. Griffith starring Mary Pickford; silent versions in 1916 and 1928, and then a talkie Technicolor version from 20th Century Fox in 1936 with Loretta Young and Don Ameche.

Up until very recently, it was thought that only the 1910 and 1936 versions had survived intact, along with bits and pieces of the 1916 version. Over the decades, prints of the 1928 version were tossed or recycled for silver, or they decayed beyond any hope of repair.

During World War II, a single Czechoslavakian print of Ramona was nabbed by the Nazis (who probably didn’t much like the film’s sympathetic portrayal of non-whites). When the war ended, Soviet soldiers looted the film archive in Berlin, and the Ramona print made its way along with many other films to the Russian film archive Gosfilmofond in Moscow.

At this point, as film historian Hugh Munro Neely puts it, “It would be fair to say that Ramona became a needle in an archival haystack.”

At Ramona’s UCLA premiere last March, Hugh Munro Neely told the story of what happened to the film next. In the 1960s, the highly respected Czech archivist Myrtil Freda visited Gosfilmofond, discovered Ramona there, and took the film back to a Prague film archive. In 1987, the Czech film archive reported holding a copy of Ramona, but after the collapse of communism in Eastern Europe, no more mention of Ramona was made, and film preservationists assumed the film had decomposed and was lost.

In 2010, film scholars Joanna Hearne, Dydia DeLyser, and Hugh Munro Neely discovered the film still tucked away in Prague. They spent the next four years negotiating its return to America, where a Library of Congress team painstakingly restored the film this year and translated its Czech titles back into English.

Vincent Brook, a writer for UCLA’s Mediascape blog, notes that the resurrection of the 1928 Ramona is important because it’s one of the only existing films directed by Edwin Carewe (born Jay Fox), an enrolled member of the Chickasaw Indian tribe and one of the few Native American directors to work in early Hollywood (make that Hollywood, period). Carewe’s brother Finis Fox wrote the film’s screenplay.

Leading lady Dolores Del Rio (born Dolores Asunsol y Lopez-Negrete) was born and grew up in Mexico and was unusual in that she proudly promoted her Mexican heritage rather than calling herself “Spanish.” As Vincent Brook notes, Carewe, Fox, and Del Rio’s backgrounds made them particularly well-suited to tell Ramona’s story of racial strife among Southern California’s earliest native inhabitants, its Spanish settlers, and the newer wave of white settlers. Perhaps as a result, the film offers a more nuanced and sympathetic, less stereotypical depiction of Mexican-American and Native American characters than most movies of the time displayed–a real treat for silent film fans who sometimes find themselves cringing at the racism of many early films.

According to online reviewers who’ve seen the re-released film, some of the film’s biggest visual treats are the stunning Western exteriors, with some scenes filmed in Utah’s Zion National Park. But the biggest visual treat of all is apparently the radiant Dolores Del Rio. According to Del Rio’s biographer Linda B. Hall, Greta Garbo and Marlene Dietrich both often insisted about Del Rio, “She’s the real beauty!”

Ramona is slated for eventual release on DVD on Timeline Films, but no date has been set yet. But for my money, no DVD can beat the thrill of being among the very first to see Ramona on the big screen in over eighty years.

Tickets for this special, one-time showing of Ramona are $10 each and can be purchased through the Heights’ website at www.heightstheater.com.