It was a headline that shocked the Twin Cities Jewish community last Wednesday: Fishman’s Closing.

“This is perhaps the most difficult letter that I have written,” Stewart Fishman, owner of Fishman’s Deli and Market, said in the release. “I want to thank each and every one of you and your families for being part of the Fishman’s family for more than 15 years.”

Many people scrambled and wrote on the Fishman’s Facebook page; shock and sadness covered the wall; while some wrote about helping, others wanted to know what happened. And still others were interested in saving Fishman’s and their challah.

A new Facebook page sprung up, Save Fishman’s Deli, where it states that the page is designed to get the word out, to help save Fishman’s.  “Exposure at this point is the first step in helping to save this vital resource to the Twin Cities Jewish Community.” (A request was made to the page’s creator for comment on this story, however at the time of publishing no comment/response has been received ) 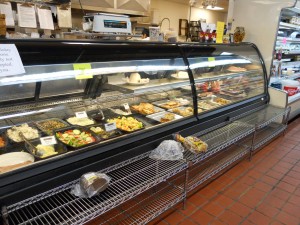 While exposure might be a step to save Fishman’s, the current location won’t be an option.   Fishman explained there was no rent increase, that for “years we’ve paid a reduced rent… We had hoped that the reduced rent payment would become permanent, our management company had hoped we’d grow into the original lease payment.  This was part of the agreement.”

“As the landlord we have a lot of confidentiality, … People have made assumptions, based on incorrect and inaccurate information,” said Stuart Ackerberg, president of The Ackerberg Group.  “We have supported the property as landlords and as community members. After 10 years, the lease is up and we are going a different direction with the building.  Stewart is a good guy, he’s worked his butt off; we are sad to see Fishman’s go too.”

Fishman explained that he has come to terms with the decision, that he doesn’t blame any one thing, person, or even the community.  It wasn’t  a lack of business either; today the average person has many options when it comes to shopping for kosher products, add to that the factors that affect one’s shopping routine, it creates a myriad of options.

The closing may just be a sign of the times, said Rabbi Morris J. Allen of Beth Jacob Congregation in Mendota Heights. There’s more kosher competition from larger markets, fewer people are keeping kosher and more people are eating less meat, he said.  “There’s no single reason why Fishman’s is closing,” Allen said. “The fact that it struggled for years is no secret. But it had a loyal customer base who cared about local ownership. It’s an end of an era. It’s a shame.” – Excerpt from ‘Fishman’s deli preparing to close, citing looming rent increase,’ Minneapolis Star Tribune, Thursday, January 28, 2011.

If the lease hadn’t come to an end, “we would still be operating,” Fishman stated, “but we needed to find a win-win situation for everyone.”

Fishman said he wants people to stay positive.  The deal on the current location is closed, there is no open door to turn around.  The outpouring of community support and positive thoughts continues to support Fishman during this time.

“I know Stewart has worked so hard to keep this business going for so many years. It makes me sad to see this happening. … My heart goes out to Stewart and his family. Many of us will be grieving right along with them. What a class act though, being so positive in such a hard time. I’m looking forward to supporting his next business.” said Susan Mundahl, St Louis Park, MN.

Now that the situation is public, it makes it much easier to work through the options and talk to people about what will happen next.

As Aristotle explained in physics, where ever there is a void, it will be filled; by what and when, that will be the question. Fishman explained that the format makes sense in the Twin Cities community, but so does two separate locations; breaking up the two concepts is an option. While no decision has been made, there are many location options in the St Louis Park area, it’s too early to say what will happen.

When asked, do you see your ‘famous’ challah making a return after the doors to this location close? Fishman commented that he hoped so.  “I don’t have a crystal ball, so I can’t see how that will happen.  There in interest in taking it elsewhere.  We have options, one of those includes taking it elsewhere to make it and delivering it to local stores, same quality, same product.  But it’s really too early to tell.”

Fishman stated “I’m very proud of the accomplishments and our 15 years serving the community.  A lot of work and a lot of hours went into this business; I can either regret the decisions or look at all the good that this has done.  We did what we could, it’s always harder to walk in the shoes then look in from outside.  I’m staying positive, looking for the next opportunity.”