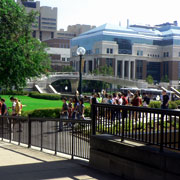 With much excitement -mainly built around strength of personality- University of Minnesota regents have selected a new president to take over in June.

The regents have concluded that State University of New York Stony Brook’s provost Eric Kaler, 54, is the best candidate for the job. What’s left largely unknown is just what that job is.

Will his four-year contract require him to oversee the dismantling of a major research university to keep its basic education mission affordable for most Minnesotans? Will he need to scale back the university’s land grant mission and divert dollars to revenue-producing departments and labs, namely the “U’s” strong medical, health and related sciences fields?

In the simplest terms possible, will he have to sell the office furniture to pay the light and heating bills?

This is the immediate problem facing the University of Minnesota and most – if not all – land grant universities across the nation and U.S. territories. Research dollars are drying up or not keeping pace with inflation at the federal level, which has historically supported land grant institutions. State budgets here and elsewhere are strained to the point of collapse from the weak U.S. economy, “no new taxes” state policy and lack of political will.

“People should be debating just what they want their university to be,” said Paul Brutlag, a Wendell farmer and Morris attorney. The more people lose sight of where their food comes from, he said, they also lose sight of what land grant universities were created to do and why they are as important today as they were a century ago.

For those reasons, Brutlag sent out-going University President Robert Bruininks a letter asking him to query presidential candidate Kaler about the following:

There were no media reports that Bruininks passed along those questions and requests in the public forums leading up to the regents’ election. But as the west-central Minnesota farmer-lawyer put it, “Now’s the time to ask. It doesn’t do much good to complain after the fact.”

While the concept for land grant universities was initially anchored in agricultural and technical colleges going back to the 1840s, it became law and public policy in 1862 when Congress passed the enabling legislation offered by a Vermont congressman, Justin Smith Morrill.

A second Morrill Act in 1890 extended land grant status to segregated campuses in states that forbade black student enrollment at white land grant colleges and universities. Most of those schools are referred to today as Historic Black Colleges and Universities or “1890 schools.”

Along the way, the Hatch Act of 1887 provided federal funds for land grant universities to establish agricultural experiment stations, which Minnesota started two years earlier on the St. Paul campus and now extends to research sites throughout the state. Outreach to people in rural areas for education purposes and disseminating research findings took shape in 1914 with the Smith-Lever Act establishing federal-state cooperative extension services.

More than a century of successes helped transform Minnesota from a frontier state to a world center in food, agriculture, agribusiness and related industry sectors spanning the entire food chain from environmental management to health and nutrition for plants, animals and especially people. One achievement alone, the breeding of the “Minnesota 13” corn variety, helped change Minnesota from being a wheat state to a corn state – with an unintended boost toward value-added processing.

While the university’s land grand mission helped Minnesota become a world leader in food and ag sciences production and the businesses that go with it, a second monster Minnesota industry began to extend from the University of Minnesota and the Mayo Clinic at Rochester. It is the complex of sciences that come together involving health, medicine, health care, medical technology and devices, and pharmaceutical research.

This second enormous strength of Minnesota’s economy is just as heavily dependent on research and public investment as the food and ag sectors. It’s led to multi-million dollar patents for the university and helped create and expand medical device companies in the Twin Cities. Yet, current state and federal budget cuts have threatened that research.

In an interview, Lee said the university’s access to federal research dollars is threatened just as much as its state budget support. Lee noted that University of Minnesota research dollars from the National Institutes of Health (NIH) declined by 6.5 percent last year, to $241 million.

That still is a lot of money to Don Wyse, a professor of agronomy and plant genetics who has watched funding decline for the traditional land grant sciences and for the experiment station during his 35 years at the university.

“I can understand what’s happening,” he said. Minnesota’s other big research strength, the med and med tech sector, is producing income. The land grant university research programs tend to be long-range research that may or may not lead to patented products, but do combat plant diseases, environmental consequences, soil degradation and nearly every underlying challenge to feeding and keeping people healthy here in Minnesota and around the world.

“But I have to ask,” Wyse said. “Where do people think the next generation of scientists are coming from?”

Almost invisible to everyone not associated with graduate schools is the role research plays in financing tuition and living costs for doctoral and some master’s degree students. Usually, a research grant will contain money for graduate assistants to work on a project; this becomes the stipend that allows students to leave jobs and return to school.

This money is shrinking, Wyse said. Looking ahead to next year the various agronomy, genetics and horticulture sciences he works with are not likely to find money for more than a third of the qualified grad students who are interested in coming to the university.

It’s not as though this work is no longer necessary. Increasing global population, climate change, stressed global resources, the speed in which pathogens travel from state to state and nation to nation all threaten world food supplies and global stability. While meeting these challenges requires public investment in research, they also open economic opportunities for Minnesota’s huge base of food and agribusiness companies. There is a payback to the public over time.

Partly for these latter reasons, the Minnesota Agri-Growth Council, an umbrella group for the state’s food and agriculture interests, recently explored the state’s role in the world at its annual meeting. While this global view is consistent with university research interests, Agri-Growth hasn’t looked specifically at what the future mission of the university should be, said Daryn McBeth, president of Agri-Growth.

But McBeth agreed with farmer and attorney Brutlag. The time for changing leadership is an appropriate time to evaluate missions and programs, they both said.

For a detailed timeline of the Minnesota Agricultural Experiment Station, click www.maes.umn.edu/timeline.asp.