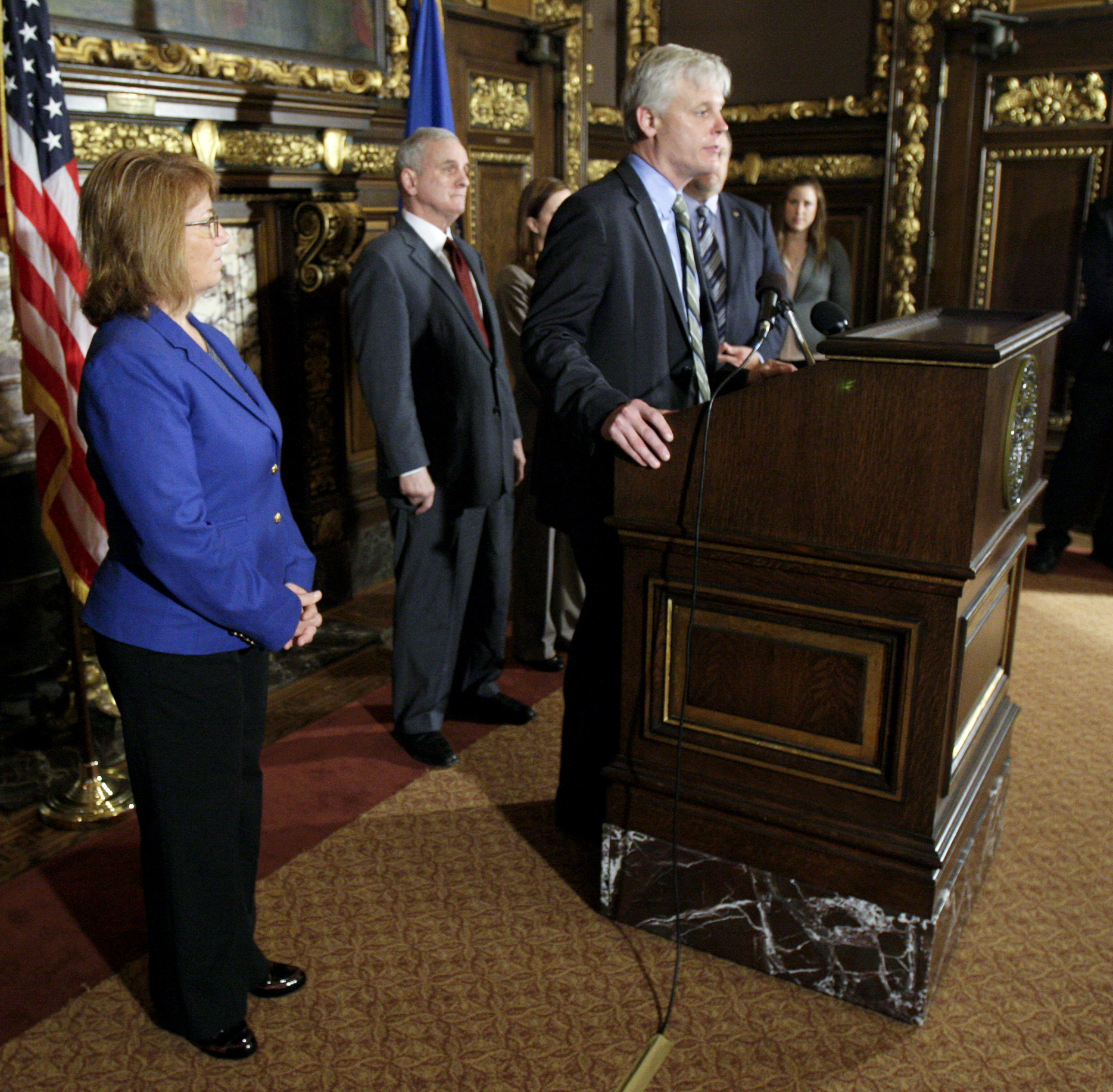 New taxes and the legalization of same-sex marriage were hallmarks of a legislative session in which DFLers wielded more power than they’ve had in a generation.

The DFL controlled the House, Senate and governor’s office for the first time in 22 years, and it shows in the two-year budget that lawmakers wrapped up Monday night. Their plan calls for raising $2.1 billion in new taxes, hiking rates for smokers and the rich. Much of the new money will go to education, including landmark funding for all-day kindergarten and tuition freezes at the state’s public colleges and universities.

Party leaders who summed up their work on Tuesday also pointed to $440 million in property tax relief, job-creation efforts such as money to support a Mayo Clinic expansion, and erasure of a $627 million deficit.

“We have reset the clock in Minnesota,” said Senate Majority Leader Tom Bakk (DFL-Cook). After years of crises, he said, lawmakers balanced the budget with “no gimmicks and no borrowing,” putting the state on a stable fiscal path.

That’s not how Republicans see it. “When we take the majority in two years, we’re going to have a mess to clean up,” said Rep. Greg Davids (R-Preston). He’ll remember 2013 as the year of “out-of-control spending, out-of-control taxes and out-of-control overreach by the Democrats.”

“The reality is they’ve been saying that since the night after the election,” said House Speaker Paul Thissen (DFL-Mpls). “My response to that is to say that for the last decade, the state has underperformed.”

A raft of controversial bills

The Legislature’s tax bill features an increase in income taxes paid by the wealthiest Minnesotans – a top priority of Gov. Mark Dayton. The plan creates a new “fourth tier” tax rate that will apply to taxable income over $250,000 for married joint filers and $150,000 for single filers. At 9.85 percent, the new top rate will be the fifth highest in the nation. It’s expected to affect about 2 percent of Minnesota taxpayers in 2013.

DFLers pushed through a raft of other controversial measures this year. A bill allowing thousands of home-based child-care providers to vote on whether to unionize was hailed by DFLers as a win for workers’ rights. Outraged critics say the bill twists the union model beyond recognition, treating small business owners as state employees.

The Legislature also created a state-run health insurance marketplace, a plan that flowed from the federal Affordable Care Act. DFLers mark it as a key accomplishment, but Rep. Matt Dean (R-Dellwood) predicted that Minnesotans will look back on that and the expansion of Medical Assistance as “the biggest mistakes” made by lawmakers in 2013.

Even in the majority, DFLers didn’t get everything they wanted. Falling short of the Republican support needed for a super-majority, an $800 million bonding bill failed in the House, scuttling funding for a range of projects across the state. Lawmakers hurriedly patched together a smaller plan that includes money for restoration of the State Capitol.

A bill meant to protect students from bullying failed to clear the Senate. A plan to raise the minimum wage stalled out, with Senate and House members saying they couldn’t agree on how much to increase it. A push to expand gun background checks fell apart in the face of resistance from House Republicans and mostly rural DFLers.

“On a personal level, I have a lot of disappointment that what I thought were sensible gun control measures didn’t even get a vote on the House floor,” said Rep. Michael Paymar (DFL-St. Paul), who chaired a committee that heard days of tense, heartfelt testimony on the legislation.

To opponents such as Davids, lack of action on gun legislation was “a bipartisan protection of the Second Amendment.”

Legislators whose top priorities didn’t become law this year said they’ll be back at it next session.

“All the heads were turned”

Minnesotans laid the foundation for this year’s lawmaking when they flipped control of the Legislature last fall, sending DFL majorities to both the House and Senate. At the same election, they rejected a proposed constitutional amendment to define marriage as a relationship between a man and a woman.

Rep. Joe Radinovich (DFL-Crosby), a 27-year-old freshman lawmaker, will never forget the day he took that vote. Minnesotans flooded the Capitol to rally for and against the marriage bill, waving signs, chanting and cheering as House members made their way to the floor. During the debate, “People were actually paying attention, and they were sitting in their seats, and when someone was talking all the heads were turned,” Radinovich said.

Radinovich, who was elected by 323 votes, was among a cadre of lawmakers who voted for the bill even though they represent districts that supported last fall’s proposed constitutional ban on same-sex marriage. “I couldn’t have voted any other way on that bill,” he said. “It’s a rights issue.” He thinks he’ll win another term, but even if he doesn’t, “Some things are more important than re-election – doing the right thing, and being able to look at yourself in the mirror.”