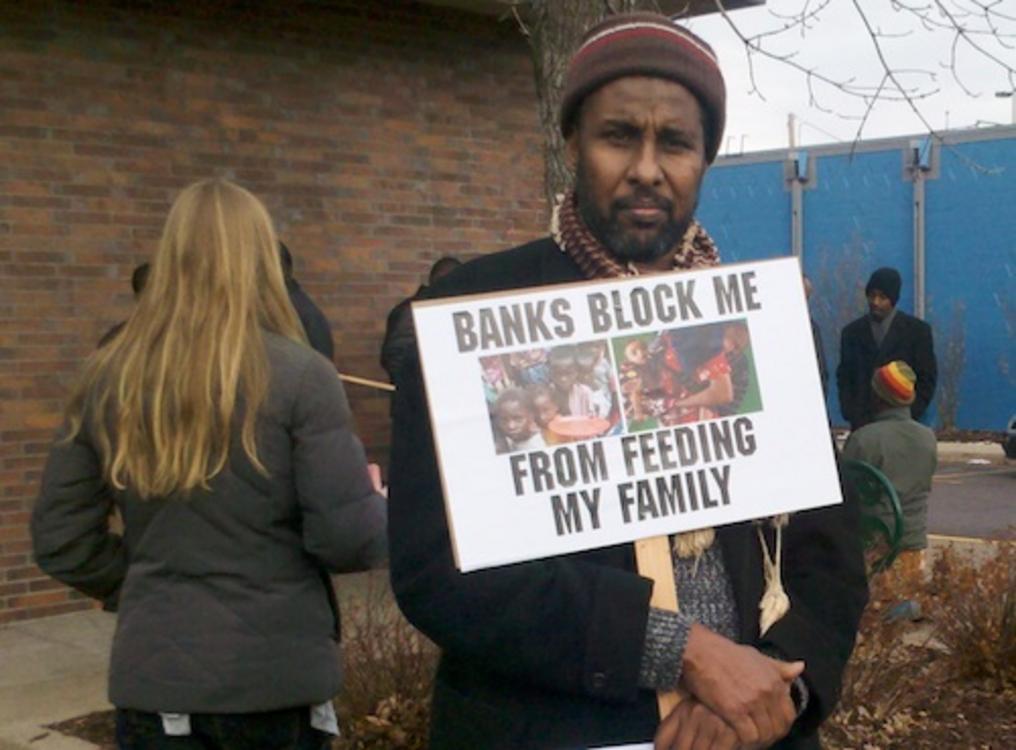 Since the civil war erupted in Somalia more than two decades ago, thousands of families have flocked to the United States and left some of their loved ones in the war-ravaged country, which now has one of the highest unemployment rates in Sub-Saharan Africa.

With their minds on those left behind, Somali-Americans have been sending a share of their paychecks in remittances, which amount to almost the annual aid the United States government sends to Somalia each year, according to a new study.

“Approximately $215 million comes from Somali-Americans and Somalis in the United States — comparable to the total amount of development and humanitarian assistance that the U.S. government sent to Somalia in fiscal year 2012 ($242 million),” stated the July study, “Keeping the Lifeline Open: Remittances and Markets in Somalia.”

The study finds that amount Somali-Americans send helps reduce Somalia’s dependency on foreign aid and “allows individuals and families to spend money based on their needs and priorities.”

The report added: “Continued support from the Somali diaspora is essential for Somalia to successfully emerge from its protracted humanitarian emergency and political crisis, as well as to build the foundations for its long-term development.”

About 40 percent of the Somali population relies on remittances the Somali diaspora throughout the world sends, said Degan Ali, executive director of Adeso, a humanitarian and development organization, which in part conducted the research.

When Somalia was stable, its main source of economy included livestock and agriculture, Ali said in an interview in Minneapolis. “These beneficiaries have left the livestock system. They’re no longer pastoralists. They’re coming to the cities and becoming urban people.”

This means that money sent from abroad is a way of survival for these people, she added. Somalis around the world send approximately $1.3 billion to Somalia each year, according to the study.

When the civil war broke out in 1991, all the formal institutions in Somalia had collapsed. As a result, millions of Somalis were left in isolation from the rest of the world: People could not travel using a Somali passport. Doing business with someone outside of Somalia was difficult. There were no banks and no way someone could send or receive money from outside Somalia.

In the early 1990s, however, money transfer operators — locally known as Hawala, which means transfer in Arabic — became popular, serving as a banking system, where people can send and receive money. Senders in the United States pay $5 for each $100.

“The average people who get this remittance are people who don’t have anything,” Ali said. They’re mostly women with four to 10 children and a lot of extended families.”

More than 20 money transfer operators send money between the United States and Somalia. The majority of these hawalas operate in countries with large Somali populations. Hawalas that function in the Twin Cities include Dahabshiil, Amal Express, Tawakal Express and Amaana Express.

According to the study: “Most are small to midsized Somali-owned businesses that were established in the late 1990s and early 2000s, responding to the civil war in Somalia and the development of Somali refugee communities. Many of these companies also send money to several other East African countries, including Kenya, Ethiopia, Djibouti, and Sudan. However, nearly half of their transfers go to Somalia.”

Banks refuse to work with hawalas

One by one, U.S. banks ended relationships with wire transfers of hawalas in the last decade. Wells Fargo and U.S. Bank were among the first banks that shut down accounts with Somali hawalas. Franklin Bank and St. Paul-based Sunrise Community Banks were the last in Minnesota to announce the divorce in December 2011, citing security concerns.

David Reiling, CEO of Sunrise Community Banks, told news reporters two years ago that the bank’s decision was triggered by the two Rochester women convicted of sending money to al-Shabab, the terrorist group in Somali.

“We don’t want to be involved in money getting into the hands of the wrong people in any way, shape or form,” Reiling told MPR. “So the only way we know at the moment to mitigate that risk is to close these accounts, until we can find another solution or work with government to re-establish those lines.”

Hashi Shafi, executive director of Somali Action Alliance, said the decision of bank officials is a “sanction against Somali businesses.”

Shafi added: “There is no risk in sending money to loved ones who are starving in Somalia.”

Hersi Suleiman, chairman of the newly founded Somali-American Money Service Association, said anyone who sends money to the wrong hands should be held accountable.

“Hawalas have records of anybody who sends money,” Suleiman said. “They ask for the sender’s name, phone number and record the information on their driver’s licenses.”

“If someone sends money to a terrorist group in the U.S. through a bank, will the bank be closed? No. But the person will be punished for the crime,” added Suleiman, who worked as a banker for more than 21 years. “Why can’t we get the same treatment? Why shut down entire Hawala businesses?”

Minnesota Somalis can still send money through Hawalas, which use a bank in California, Suleiman said, but “we are spending a great deal of money.”

Other recommendations included that: “U.S. Government officials should prioritize the secure transfer of funds to Somalia and develop contingency plans for shutdowns and reductions in service, bearing in mind that increases in aid are not an adequate substitute for the direct financial flows from diaspora communities that build resilience and address people’s needs and priorities directly.”

Adeso, Oxfam America and the Inter-American Dialogue, which jointly produced the report, invite Minnesotans to the research’s launch event on Sept. 6, at 6 p.m. at Safari Restaurant, 3010 Fourth Avenue South Minneapolis.