Visitor Dorothy Wilson (above) exclaimed that a facility like this would have been wonderful for her mom as she got older, when doctors prescribed physical activity but “the pain was too much, and she came to like being waited on. We didn’t realize the damage that was doing.” Now a caregiver consultant for Volunteers of America, “I really encourage my clients to move. Seniors think the older we get, we should slow down, but it’s just the opposite, and this facility will help families understand” the importance of activity, and give seniors a nice place to get most any level of exercise.

The Heritage Park Senior Services Health and Wellness center on Fourth Avenue North near Bryant, not quite open yet, bustled Feb. 22 with workers bringing in equipment. Staff people were setting up offices. We marveled at the therapy pool with lift and underwater cameras, two dance/exercise studios with cushioned wood floors, and a one-eighth mile indoor walking track (the track open to the entire over-55 public) around the sun-filled building.

On the Bryant end of the campus at Thomas T. Feeney Manor, the first of the residents would be moving in, and other families were inquiring about the 20-some units remaining. Katie Stadther of Augustana Care (in pink, above) said the 48 assisted living and memory-care units should be filled by the end of March. For leasing information on Thomas T. Feeney Manor and Heritage Commons at Pond’s Edge, the nearby 102-unit senior community to the west of the Health and Wellness Center, contact Katie Stadther at 612-843-0090 or kstadther@augustanacare.org. 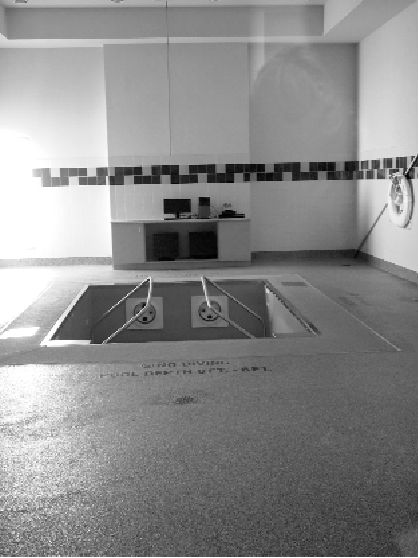 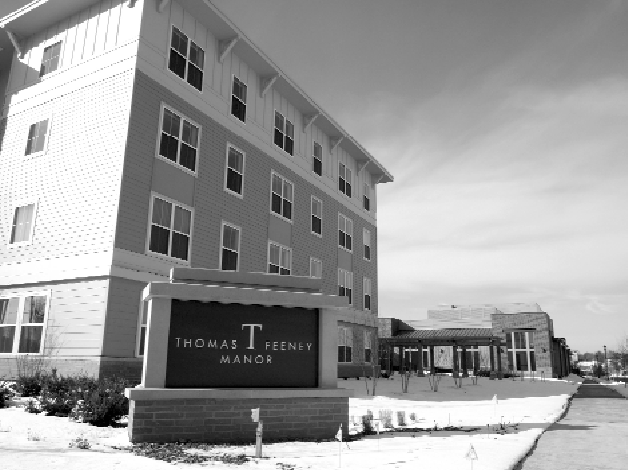 The idea of a continuity of care is new in the public housing realm, said Bob Boyd, Minneapolis Public Housing Authority (MPHA) Director of Policy and Special Initiatives. “We were responding to huge needs,” he said, recounting situations where a senior’s changing health (sometimes, improving health) would lead to stress and trauma of moving from one facility to another, having services taken away, having to give up their home.

“What inspired this—Cora McCorvey (MPHA Executive Director).” She worked her way up from clerk, through manager of property. “And she would see elders, particularly older women, with dementia. She tells the story of a lady who showed up for a meeting in hat, shoes, and a slip. She wanted to offer a dignity, but at a cost affordable to HUD,” allowing service providers and the state to save money, make it so the county wouldn’t be paying for housing. “For years, she has wanted to do this,” Boyd said.

He pointed out that the new buildings were built at the southern end of Heritage Park as an anchor to encourage other development to fill in between them and the existing housing. MPHA owns the land, the former “projects,” and hopes to work with the City on bringing in a new set of market-rate developers.

Dozens of job openings with the various partner agencies are to be filled by local residents (openings posted on their respective websites). After some staff training time, various parts of the wellness facility will open at various dates throughout the month of March. A celebration is planned for June.

“The cornerstone of Heritage Park Senior Campus is Thomas T. Feeney Manor, the first public housing community in the nation to offer enhanced assisted living and comprehensive memory care housing with services. Feeney Manor will be managed by Augustana Care, which has over 115 years of experience serving elders and others in need.”

“Neighborhood HealthSource, a federally qualified health center that has served the needs of North Minneapolis at its Fremont Clinic site for over forty years, has been selected to offer a full service medical clinic with innovative programs and treatments tailored to the specific needs of seniors living in North Minneapolis.”

Executive Director of Neighborhood Health Source, Steve Knutson, said “our providers have often said, ‘I wish I could just walk patients down to an exercise facility, or an adult day center to show them what it’s like. We send them armed with information and hope they follow up. Now we can make that handoff.”

Knutson said, particularly at the Central clinic in Northeast, they note the effects of loneliness and isolation, the impact it has on overall health care. People over age 50 can arrange appointments through centralized scheduling at 612-588-9411. The new Heritage Seniors Clinic will start seeing patients March 12; there are four exam rooms.

“It is going to be just for people age 50 and over. We won’t be doing well-child or maternity care. However, we will be sensitive to grandparents taking care of grandkids,” Knutson said.

Jamal Riley, program executive for the YMCA at Heritage Park was on-site as exercise equipment arrived. He called the center a “great opportunity to work together” in a premiere facility that “is a pioneer, maybe other cities will follow this as a model of health, wellness, and engagement.”

Bob Boyd, who did much of the complicated grant-seeking that went into the facility, and Evelyn LaRue, Director of the Heritage Park Senior Services Center, said community members as well as agencies were consulted in the planning. Seniors provided opinions through focus groups. The reception and feedback has been very positive, Boyd, LaRue and Riley all commented. This community is not used to this level of attention and quality facilities for seniors, they said.

When the Y had let go of its “Silver Sneakers” program in order to turn the West Broadway Y into a youth facility, “it left a huge void,” Boyd said. Riley said the Silver Sneakers and many fitness, wellness, and diabetes prevention classes will be available at the new facility. The Y will start selling memberships March 12 and open their facilities for use March 19. While memberships cost $35 per month, they will be having a discount promotion, and often health insurance will pay part of a fitness membership.

McCorvey shared her thoughts regarding this unique environment for elders. “It is an honor to join with distinguished partners and give the gift of dignity to some of the most vulnerable in our community. Our goal is to provide a place of both community and safety for our elders to gather. We also seek to create a home for those who are at risk of losing theirs. MPHA’s Senior Campus provides an opportunity for us to respond, not just to the needs, but to the aspirations of seniors.”

Both Feeney Manor and the senior services center incorporate numerous environmentally-friendly or “green” technologies. To see a digital tour, go to www.youtube.com/ watch?v=xv-FH_CET6k. For more information, call Bob Boyd at 612-342-1437 or Mary Abrahamson, MPHA information and website coordinator, at 612-342-1401. 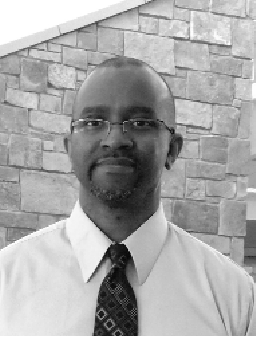 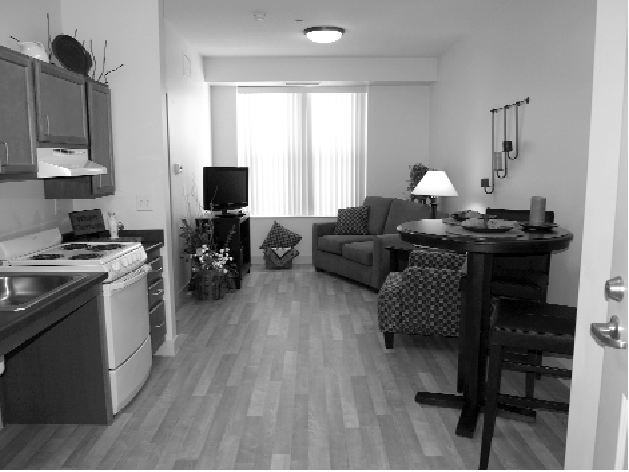 Jamal Riley, above, is program executive for the YMCA at the new facility. The assisted living apartment shown at right is typical at Thomas T. Feeney Manor, with a separate bedroom and handicapped-accessible bath with roll-in shower. In memory care units, stoves can be disabled if they pose a danger. 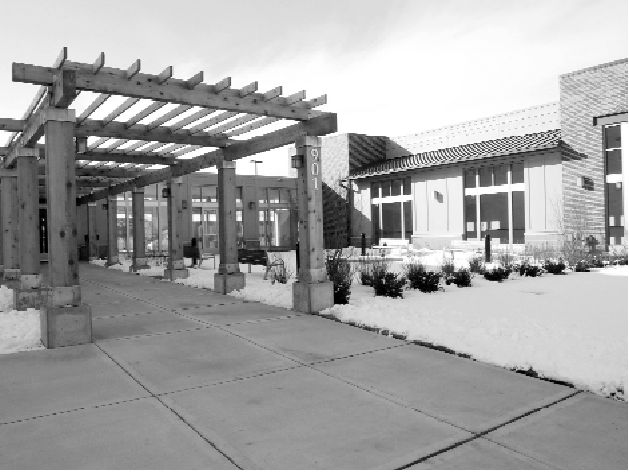 The building address is 901 Fourth Ave. N., there is a parking lot on the south edge of the building. The facility has a huge meeting/dining room, available for events, and even a grand staircase and fountain worthy of wedding photos.