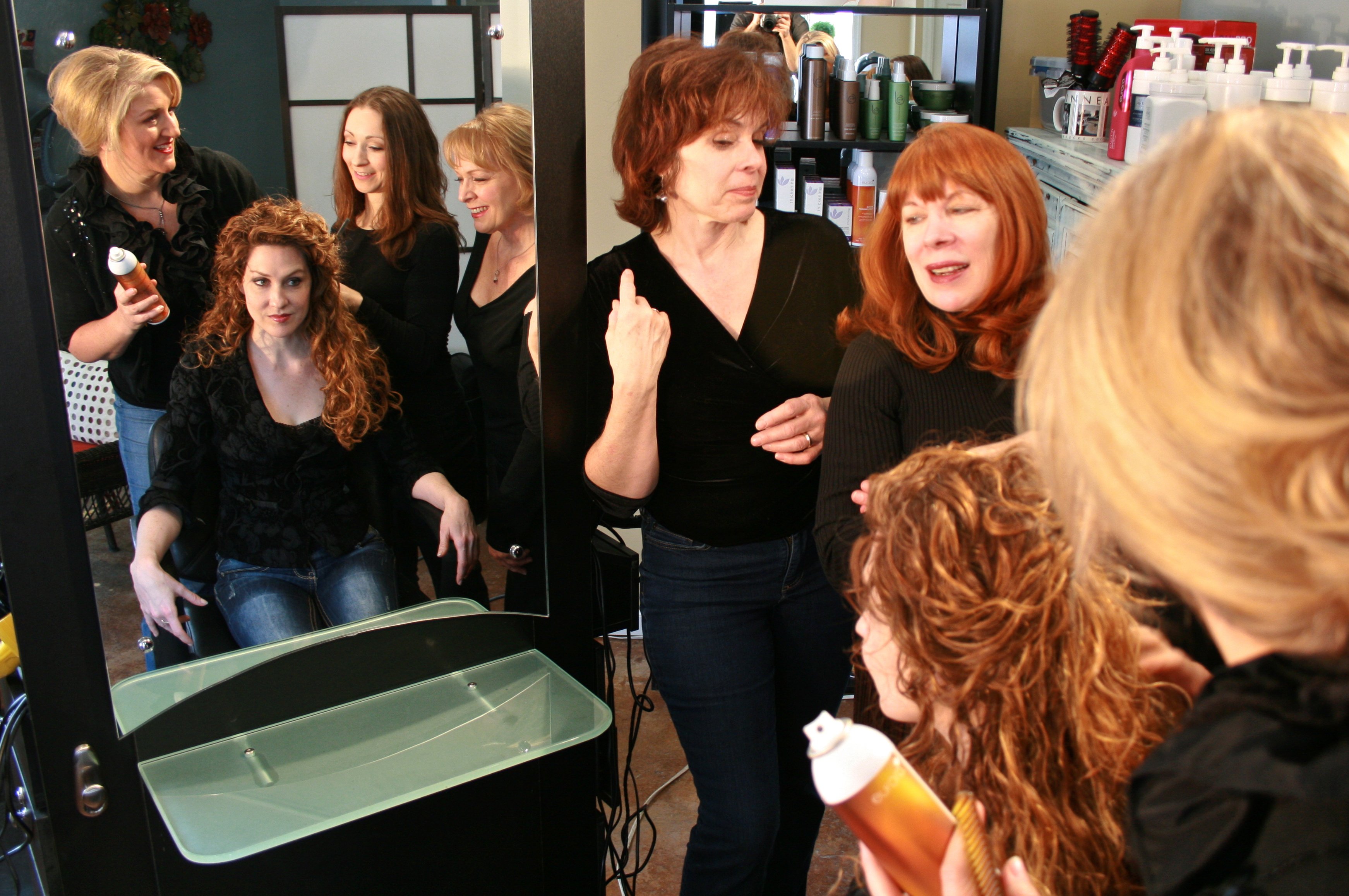 The cast of Steel Magnolias training for the show. From left to right, in the mirror: Greta Grosch (Truvy), Heidi Fellner (Shelby), Annelle (Lisa Bark), and Jody Briskey (M'Lynn). Photo courtesy of the Old Log Theater.

It’s been a long, cold winter and an irregular spring so far in Minnesota. Tantalizingly warm days are still alternating with cold runs and the threat of overnight frost, and more than one early start at gardening has been done in by a cold snap or this year’s late snow. This weekend’s forecast for the Twin Cities is lovely, however, and the tulips that tentatively poked their buds above the soil a few weeks ago now measure a foot or more in their full bloom. Late visits by Old Man Winter not withstanding, winter-hardy magnolia trees like the Butterflies variety have been resplendent with flowers for the past month.

Resilience in the face of bitter stress (albeit not of the cold variety) is one of the central themes of Steel Magnolias, a celebrated play that finished its run last night at the Old Log Theater. This production didn’t have to weather quite the winter straits of its predecessor show at the Old Log – Almost, Maine’s frosty setting was matched by record cold outdoors and enough snowstorms to send long-time residents towards the Mexican border – but its Louisiana backdrop and talk of sweating in the heat is enough to make Minnesotans start pricing out a Mardi Gras trip to New Orleans. (A line in the play grouses on the horrors of a 39-degree low in the winter. They have no idea.)

For a play about episodes in everyday life, Steel Magnolias has some very hard-hitting material. The six women who comprise the cast of characters are immensely varied, multi-layered, and frequently challenged with questions and situations for which there are no easy answers. At the same time, much of the play is comedic, and the distressing situations that the characters enter into are often met with a string of zingers. This fusion was a critical success when the play first played Off-Broadway in 1987, a run that lasted for three years – an extraordinary success for a spoken play. The play even outlasted the entire production process for its film adaptation, which reached theatres in 1989; the film script (also by playwright Robert Harling) helped garner its actresses multiple award nominations in both the comedy and drama categories, notably including an Oscar nomination for Julia Roberts.

Twenty-five years later, the Old Log’s production of Steel Magnolias struck a strong chord with audiences. Ticket sales were strong throughout the run, the audiences came from both near and far, and the attendee demographics were notably more diverse than the theater’s historic core audiences. After Friday’s performance, several groups of 20-somethings left the building discussing favorite parts; by the time they reached the parking lot, an impassioned defense of one scene reached shouting levels, with actresses’ and characters’ names being tossed loudly over cars. “How could you not cry about that?!” exclaimed one young woman angrily, brushing aside her companion’s protest “I liked the funny parts”.

Bringing this play to life was a long and involved process, especially since the characters are true-to-life and not stylized or exaggerated. The cast’s immersion process included visiting a beauty shop for hands-on training with the numerous haircutting, styling, and other actions that take place in each scene; the long six-week rehearsal process included dialect coaching and numerous discussions about the characters and their environment. The show continued to evolve during the production run, too, finding different notes and grooves.

So what ingredients made up this recipe for success? The resonance of the written material – what actress Lisa Bark (Annelle) noted is often described as “The funniest play to make you cry” – was obvious in interviews with the cast. The ladies spoke frequently about how the scripted captured a sense of actual conversation, down to how people interrupt each other and switch streams of thought mid-conversation. The characters don’t get along perfectly, but live in a web of relationships where pushing, tugging, and pushback have been going on for a long time.

Casting was another important ingredient, especially in a play where many of the characters are onstage for almost the entire time. R. Kent Knutson, the company’s artistic director, spoke of wanting to both introduce West Metro audiences to new faces and to find actresses who could engage with the characters on a special level. The resulting ensemble included several Old Log debuts as well as a few returning faces. Actress Greta Grosch is an area fixture, having penned and starred in several installments of the Church Basement Ladies musicals; Shelli Place is a veteran actress but made her Minnesota debut just last year. Michelle Myers Berg and Lisa Bark both returned to the Old Log for their second appearances, while Jody Briskey (a 2012 Ivey Award recipient) made her debut there with Steel Magnolias. Heidi Fellner is no stranger to the Old Log, but is perhaps more frequently heard in voiceovers and on the musical stage. It’s a diverse mix, but one that gels very well.

Managing the arc of the play and rhythms of each scene also came up frequently in interviews. As Greta Grosch (Truvy) noted, “The darkness that happens in the show is just one piece of it. What the show is really about is about six women and their relationship. It’s not that it’s a comedy, but it’s this sort of comic relationship show with this dramatic through-line… those to me are the best kinds of shows, because it’s fun and it’s light-hearted and it’s about falling in love with these characters and how they relate with one another. It just so happens in this show, as in life, that something dramatic happens.” And something ordinary and yet wonderful happened onstage.