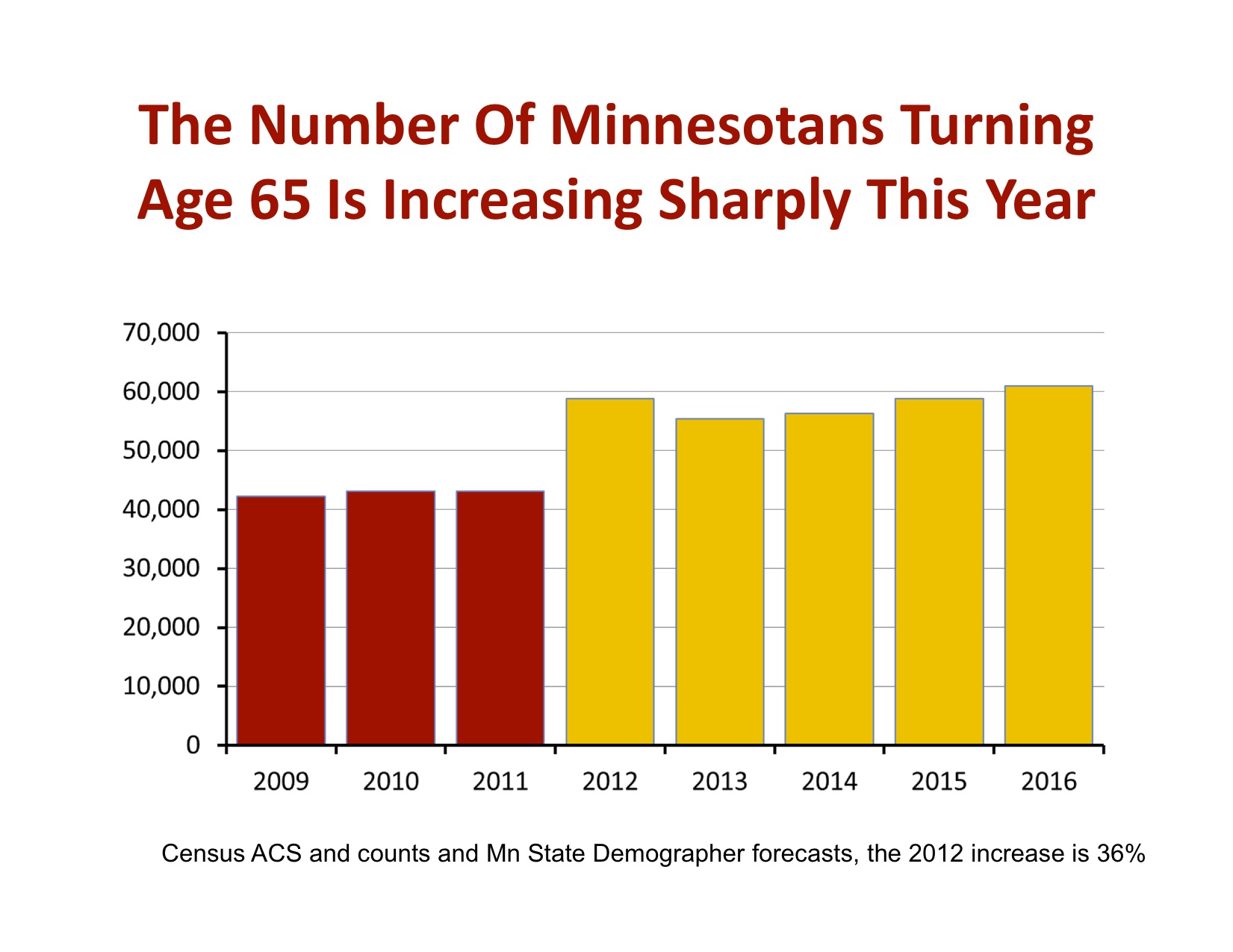 All tables from Stinson/Gillaspy presentation.

Leave it to a demographer and an economist to stir things up. “Looking into the future, things aren’t all that great,” said state economist Tom Stinson, but the New Normal “plays to our strengths” as a state. According to just-retired state demographer Tom Gillaspy, the state’s population is aging, but that can offer positive opportunities as well as costs.

The two offered their insights at the Parents United for Public Schools 10th Annual Leadership Summit. Tom Gillaspy, who just retired as the state demographer, having served since 1979, and Tom Stinson, Minnesota’s state economist and a professor in the Department of Applied Economics at the University of Minnesota, delivered a fascinating presentation on how demographics and policy will shape the state’s educational future, and the role education will play in the survival of our economy.

The bad news is in the state budget outlook, according to Stinson. While the state economic outlook has improved since the “Great Recession,” we’re still looking at a $1.1 billion dollar state budget shortfall in FY 2014-15, which increases when you add inflation.

“The great recession is over,” Stinson said. “It’s been over for three years. The economy is growing, but it’s not going to return to the place where we were before.” In the “New Normal” that we now live in, “economic and demographic events have changed the outlook for as far as we can see.”

Besides unemployment, wages have been in decline, Stinson said.

Meanwhile, the baby boomers are aging. The start of the great recession in 2008 was also the year the first members of the baby boom generation turned 62, and became eligible for social security. “Minnesota and the United States will add more people to Social Security in the next decade than the last four decades combined,” he said. The people turning 65 this year will be 85 in 2032.

“There’s a theory in demography,” he quipped. “It’s one of those math theories. Most of us age one year every twelve months. It’s a pretty regular process.” Thus we are “poised on a very enormous retirement boom unprecedented in history … We are an aging society. This has never happened before.”

In the spring of 2008, high school graduation peaked, and we will not return to that level until about 2022 or 2023, he said. That means fewer young people entering the workforce, and dramatically slowing labor force growth.

Europe is actually “older” than us, according to Gillaspy, by about 10 years. In fact, we may see the economic problems facing Europe now in ten years if we don’t do something about it. “This is a wake up call,” he said.

Japan is even “older” than Europe. At one point, Japan was the second-largest economy in the world. Now it’s the third largest. Their downturn in labor force started in 1988, and they have been in a downturn ever since. “Japan’s economy literally is getting smaller,” he said.

China’s population is growing, but it’s beginning to slow down. By 2017, China’s workforce begins to decline, Gillaspy said.

According to Gillaspy, there are only two ways to grow an economy. The first way is to “add more people making stuff.” The second way is to “increase per-worker productivity.”  Since we’re adding fewer people to the labor force, increasing productivity is the way to grow the economy. That’s where education comes in. 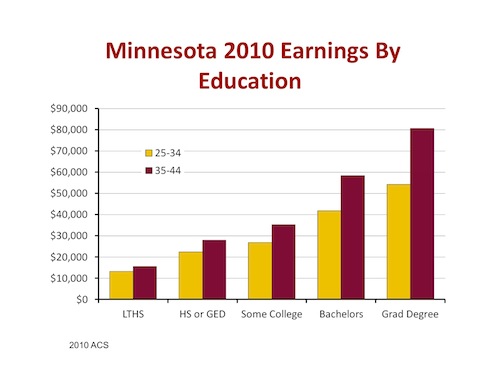 Worker productivity “isn’t just about adding bodies”, according to Gillaspy.  “This is about people with skills and abilities in an environment moving very quickly. The world is getting smaller,” and you can’t just throw uneducated, inexperienced people into a massive number of jobs.

Increasing immigration is causing our society to grow more racially diverse. While Minnesota is one of the least diverse states in the country, we are changing, too. Most of the country’s most skilled workers, the top scientists and engineers, are foreign-born workers. “How we respond to this change is the key to whether we are a prosperous society,” he said. 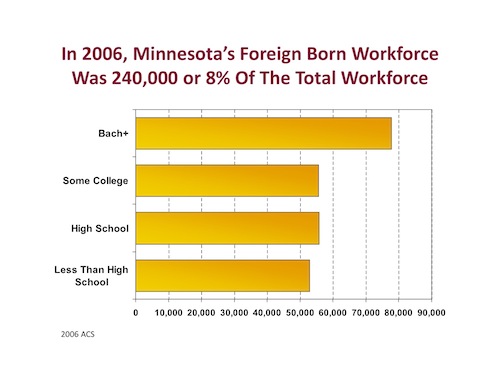 By 2020, there will be more people over 65 than school age. The biggest parts of Minnesota’s state budget in Minnesota are education and health care. The shifting demographics mean budgetary shifts as well.

Minnesota faces a “fiscal trap,” Stinson said. But it’s not too late. “There is still time to do something about it, but time is getting shorter,” he said. There are long running structural problems, and there “have to be fundamental changes in spending and revenues,” he said.

The worry is that state spending will shift its focus away from education, research and infrastructure as the needs of health care for an aging population increase.

The New Normal “plays to our strengths” as a state, Stinson said. “Minnesota has never been a high labor force state. We’ve been a high productivity state. Education is key to productivity and prosperity.”

In the public sector, productivity growth will be essential. It must reduce the recidivism rate in criminal justice, and increase graduation rates, he said. The state’s education system faces increased retirements, which means we are “about to lose our most experienced teachers.” To meet the challenges, Minnesota must restructure government costs, replace government workers wisely, and re-engage the retiree population.

What we have are “people who have something they never had before in their life- time,” Stinson said. That time can be used for good, or not. The retirees will either be “great champions with education or great enemies of education,” he said. One way to engage retirees is to engage them, in things like tutoring or coaching.

In 1950, Minnesota had below average income and education, but by 1970, we had caught up, Gillaspy said. Today, our state has one of the highest education and income economies in the nation, and the world. Some 92 percent of Minnesota’s population has a high school diploma, but today we are graduating only 78 percent of students, and in some areas, only 50 percent. Minnesota’s prosperity depends on whether the young people are successful.

In closing, the two Toms offered this quote, by Wayne Gretsky: “I skate to where the puck will be. Not to where it has been.”