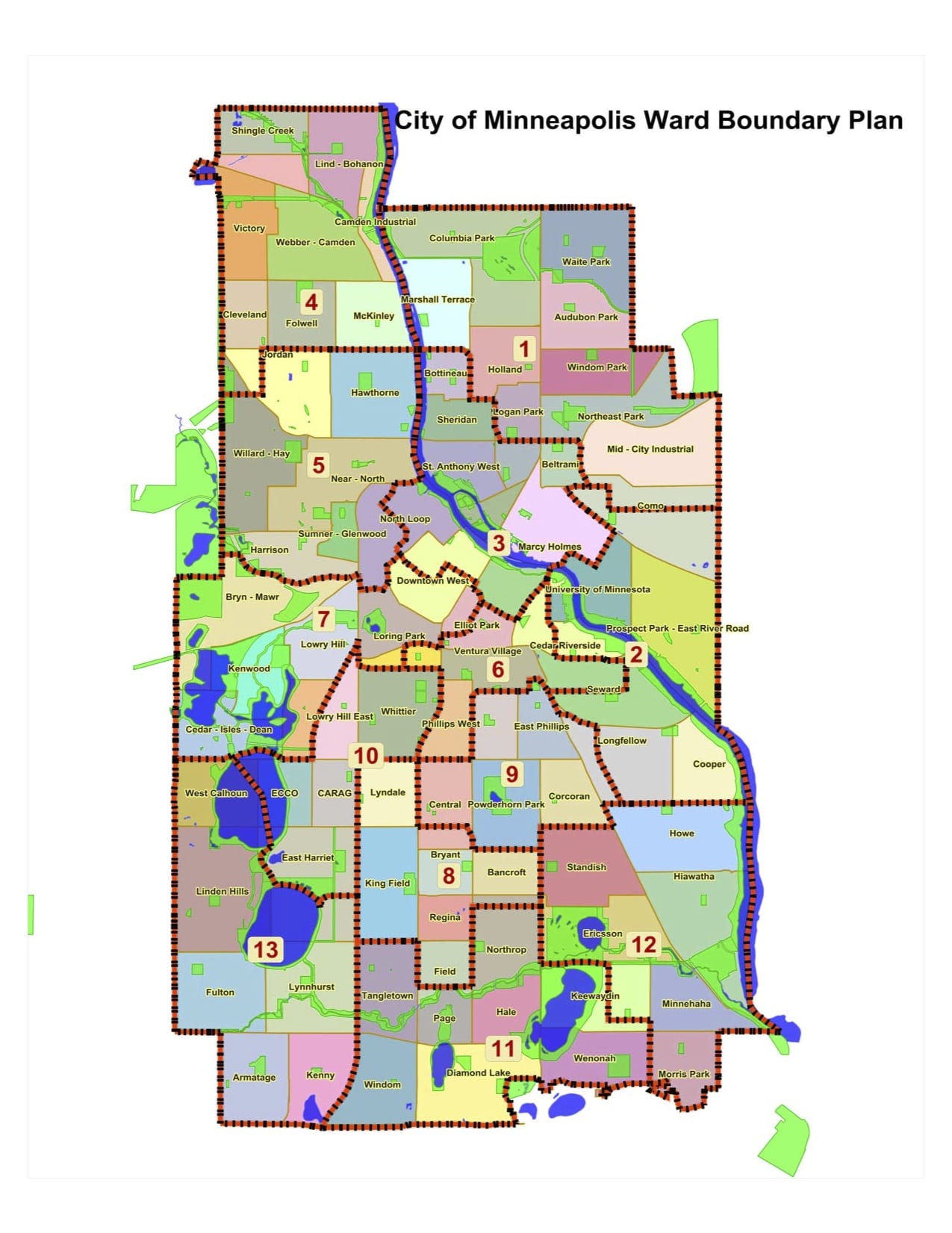 Minneapolis has a new, redistricted ward map, and lots of people are unhappy with it. The redistricting panel sent the final map to the Charter Commission, which will vote on it Tuesday. The Star Tribune reported dissatisfaction from Latino and American Indian voters at City Hall for Monday night’s vote, because of redrawing the Sixth and Ninth Wards, in a way that splits Latino and American Indian communities, while giving an advantage to East African residents. (See map below, and click here for full-size map.)

The redistricting discussions focused on minority representation and on how downtown is to be represented. The final map divides downtown among multiple wards, and  creates a Sixth Ward that includes all of Phillips West and Ventura Village and parts of four other neighborhoods. 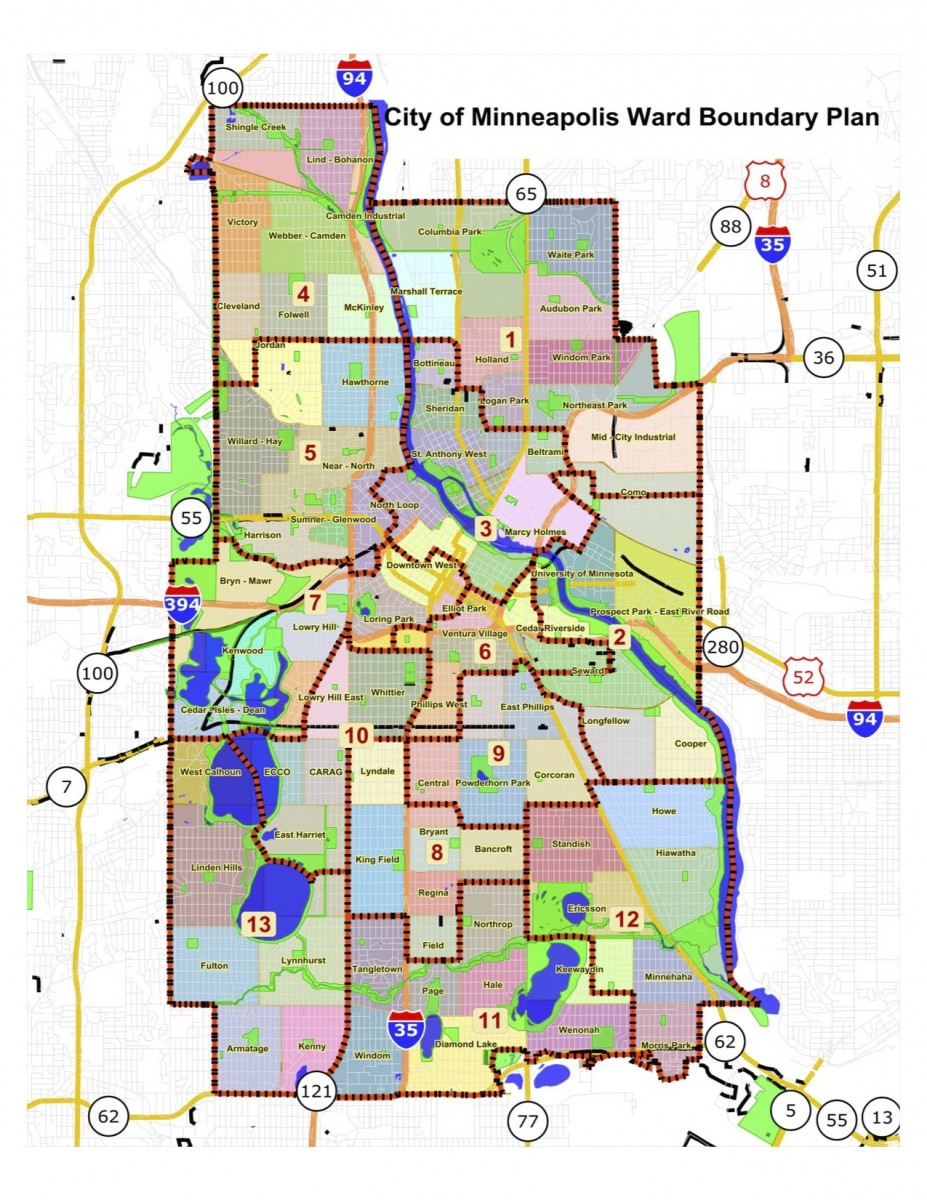 E-Democracy commenters were dissatisfied not only with the South Minneapolis configuration, but also with Northside changes. Here’s a sample:

The Sixth Ward is the clearest example of what should be Gerrymandering that can be found anywhere. The Political Science Department at the University should use it as a classical example of Gerrymandering. This entire redistricting exercise in Minneapolis is an example of political pandering and political power juggling. Hopefully, some one will take the issue to court. I believe we should seek to remove politics and special interests completely from the process and strictly use the criteria that is SUPPOSED to be used.

The Phillips Community Planning District (Old Phillips neighborhood) is an example of what should have been the new Sixth Ward. It encompasses almost the exact population and number of voters required, Is surrounded by very specific natural boundaries, is contiguous and almost square. It also is almost in the middle of the city and is compact. It should have been the coherent start of the map planning for drawing the Wards Map of Minneapolis, and the Sixth Ward.

Instead the Sixth Ward boundaries could be used as an example of the worst of politics. Favoring one group over the interests of others, the redrawing of Ward boundaries are exactly like that originally drawn caricature of a lizard that gave the very name to Gerrymander and political pandering.  This is. especially true of discriminatory actions against the interest of the Indian Community  The “plan” is purposefully discounting the interests of the Indian community; and separating the most coherent Urban Indian Community in North America.

Some will say the interests of native people were not even a consideration in this plan. Which is an even a worse indictment in my mind.  Yes, it is a political disgrace. Intended or not.

The new map still splits Seward between the 2nd and 6th wards. Just about everything north of 22nd Street (west of 30th Ave) and all residential property west of 23rd Avenue is in the 6th ward.   In fact it does so more based on economic lines than the previous one did. Except for the Matthews Park Townhomes and a few scattered site houses, all the subsidized housing in Seward is in the 6th ward.  Also, 95% of Seward’s whole commercial district is in the 6th ward.

This battle is really about fighting for development rights and which ward will have those rights along a “banana” and the impound lot with future development along Bassett’s Creek.

It’s about a train storage transfer station vs. mixed use development, parks and trails along Bassett’s creek leading into the Mississippi River.

This is one of those redistricting battles that gets really sticky and gooey… with a whole bunch of “isms” in the way. This is a development political battle – not a democracy voice for the people and best for the community battle.

There are some people in Harrison and Bryn Mawr trying to work together and do some great things for the entire area but the challenges by others boils down to the same old, same old –  Power and Control of land use.

As a matter of fact there are quite a few people interested in naming the area West Minneapolis, there is new development coming to Glenwood Ave., there is a new great restaurant called  “Sparks”, and the next 5 years could prove to be very exciting in the last undeveloped area of the City.  And most of us want to work together and Occupy West Minneapolis is springing forth. Is it fair that Ward 7 gets to use the demographics of north of the creek for their proposed planning – or is it the right of those north of 394 to Olson Highway to get to determine what is best for their community as a whole and together?

The redistricting process was lengthy, and involved many public hearings and comment. For the timeline and succession of proposed maps over the past two months, click here for city website, and follow the links in the center and lefthand columns.