An artist’s rendering of the new bridge design. (Photos and graphic provided by Hennepin County)

Construction of the new Lowry Avenue Bridge over the Mississippi River continues on schedule for a summer 2012 completion, according to Hennepin County Construction Project Engineer Paul Backer.

He said the arches will likely be erected late this year.

Like last year, Backer said, they expect to continue construction work through the winter. “I don’t foresee weather shutting us down too much,” he said.

Now that the parking lot behind Tony Jaros’ River Garden is ready, crews will soon begin work on the underground sand filter system that will be constructed on the former Superamerica property. That system will filter storm water runoff from the bridge and from about 80 nearby acres, before the water is discharged into the Mississippi River. The parts of the structure that will be visible above ground will be buffered by landscaping, he said. 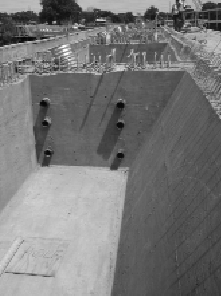 According to the project’s web site, the concrete walls and bottom slab for the main river span have been poured (left). Workers are building a platform to construct the main river-spanning structure, so the river channel can remain open for river traffic during construction (below). When this piece, called the precast edge girder, is complete, it will be carried out to the navigation area by barge, and hoisted into place.

Next week, the Minneapolis City Council’s Transportation & Public Works Committee will consider the appropriation for the city’s share—about $2 million—of the Lowry Avenue Bridge’s second phase, running from about 350 feet west of the river to Second Street N, including a bridge over the CP Rail tracks, retaining walls, roadway, lighting and storm water infrastructure. The city’s share will cover a portion of construction costs, design engineering, construction engineering and right-of-way acquisition. The total cost for the second phase is estimated at $18.6 million; the cost of the entire bridge project is estimated at $104.2 million.

Backer said no more public meetings or open houses are planned at this time. “We’ve been directing folks to the web site [www.lowryavenuebridge.com]” for information, he said. 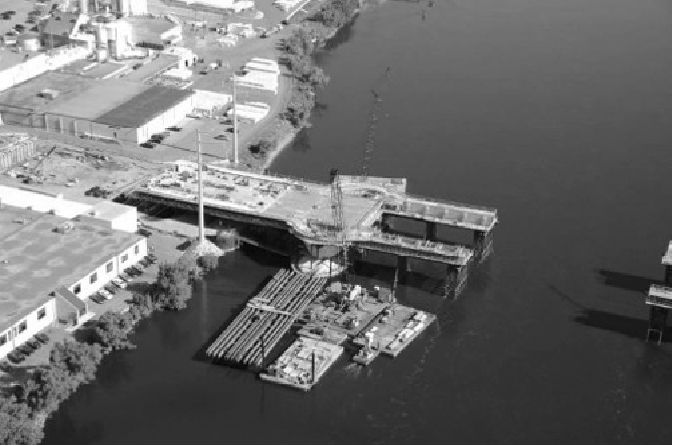