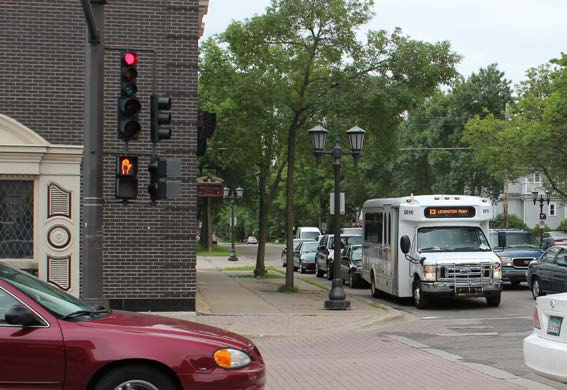 After two years of collaborative discussion and consultations between representatives of Metro Transit and the SHA Pedestrian Safety & Traffic Calming Committee (PS&TC) over plans to create a new north/south bus line on Lexington Parkway connecting south of University communities with the new Green Line LRT – it has finally born fruit and the shuttle buses started rolling on June 14 th.

Starting in 2012, the PS&TC and area residents worked with Metro Transit and City Public Works staff to help define the planned Route #83 that runs from West 7 th Street, and along Lexington Parkway to the Green Line and points beyond – in order to increase LRT ridership through new feeder bus access. To the surprise of several residents at the April 2012 public meeting, the Metro Transit Planning & Design Phase staff members didn’t have a plan to show – because they wanted our input first. This was the start of a very good working relationship.

Then in January of this year, two dozen residents turned out at the Linwood Rec Center to hear the final Metro Transit Plan for helping Summit Hill residents and others south of University access the Green Line LRT by bus. And many of them like what they heard.

The meetings were organized by the SHA Pedestrian Safety and Traffic Calming (PS&TC) Committee in collaboration with Metro Transit and City Public Works.

There are still some valid concerns noted by residents about traffic congestion (with or without the new shuttle buses) for cars going either north or south during peak hours. Such as: whether to request the city to put in a left turn arrow at Grand for northbound traffic to help improve traffic flow.

For those interested in being more involved with the PS&TC Committee in future discussions, please contact the SHA office at 651-222-1222 or summithill@visi.com.